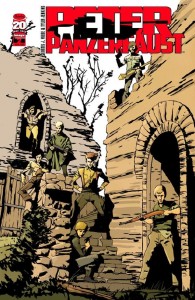 Kurtis Wiebe has not slowed down in issue 2. As with the first issue, I found myself saying out loud after finishing this issue “that was really good!” Then I went back and read it again. The framing device of the first issue continues with one of the Lost Boys telling the story of Peter, but Wiebe doesn’t fall into a narration, he sets up bookends and lets the action hold the reader. When he returns to the narration to close out the chapter he sent chills up my spine.  The dialouge is tight and there are several moments in the book that will have you cheering as Peter smugly battles the enemy.

Wiebe is beginning to explore the darker side of these self-made boy soldiers and we already see the cracks around the edges. It will be interesting to see this develop as he starts spending more time giving each character a unique voice.

Tyler Jenkins is also finding his style in this book. I’m still having difficulty telling the characters apart at times, but the story makes perfect sense even if you are like me and only see Peter and “the rest of the Boys.” That will come in time and the book moves too fast to worry about it.  I particularly like Jenkins’ layouts as he lays panels over each other, changing the pace to suit the action. I usually grumble when there are several splash pages in a story, but Jenkins uses them carefully to aid the story and hit the dramatic moments.

Peter Panzerfaust is one of the best books on the shelf right now, if you can get to that shelf in time. Both issues have second prints coming . This is good old-fashioned monthly comics. No trade waiting and no story decompression. The comic moves fast and you need to catch up right now.

Keith co-hosts the podcast We Talk Comics . Kurtis & Tyler were interviewed on the show when Peter Panzerfaust#1 was released. Click here for that episode.