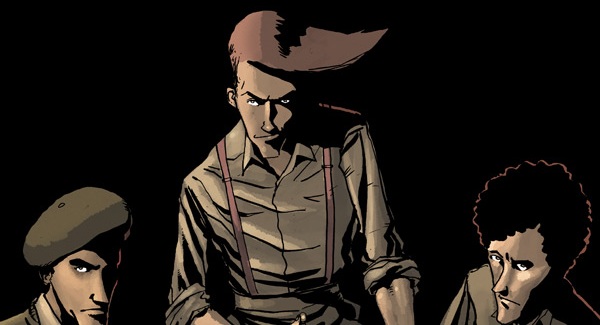 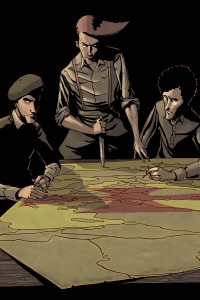 The story voice changes dramatically in the start of the second arc. We turn to Julien and his tale of the French underground during the occupation of Paris.

Wiebe starts the book by pointedly correcting the popular belief in North America that the French folded easily to the Germans.  This won’t be a tale of Americans liberating a beaten country, this is to be the story of the resistance who never gave up their country, even when facing an over-whelming force.

The style changes just enough in tone and layout from previous issues to reflect the change of voice. Unlike Gilbert who saw the war as a time of survival, Julien took to his role with a sense of great heroism. Jenkins gives us large panels and a few full page splashes, landing the dramatic moments. The scene in which Julien makes his most dangerous move is cut to two medium-size panels in a sea of black, and is serves to cut the exposition scenes and the spy mission section.

Wiebe continues expanding the Panzerfaust take on Pan characters, but it would be a spoiler to note which familiar name enters the story this month. Peter Panzerfaust is a fantastic adventure tale and as usual it receives my highest recommendation. The trade paperback of issues 1-5 also hit the shelves this month and issue #1 is available for free on Comixology. There is no excuse for missing out on this remarkable book.

As Julien would say – “C’est magnifique.”