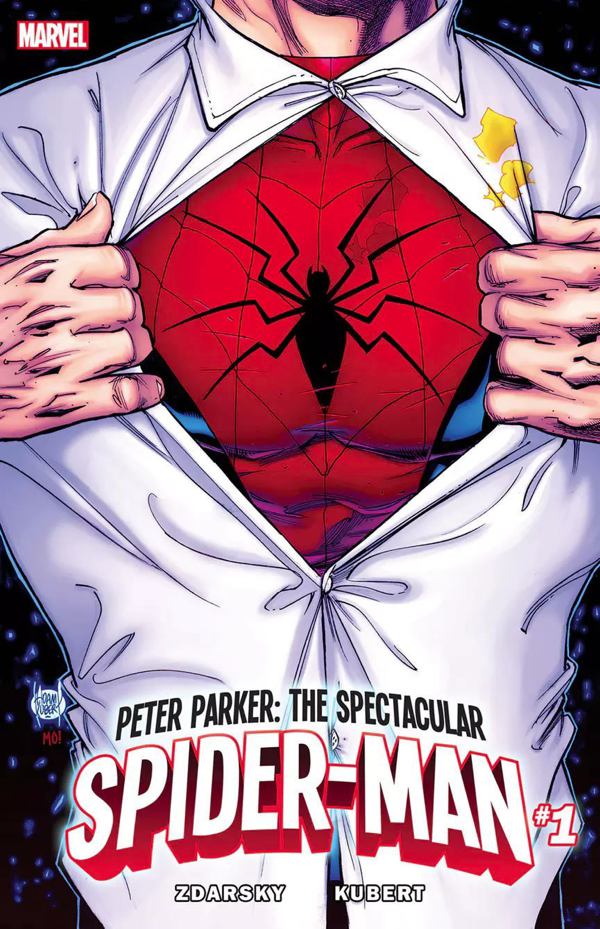 It’s a simple thing, really, and something so very many of us take for granted, but on the first spread of Peter Parker: The Spectacular Spider-Man #1, colorist Jordie Bellaire brings sunlight to the adventures of everyone’s favorite webslinger, washing over the Adam Kubert-drawn New York skyline with deceptive simplicity and nigh-tactile warmth. And it turns into a metaphor for this entire issue.

There’s very little Parker Industries melodrama in the pages of Peter Parker: The Spectacular Spider-Man #1, but Zdarsky makes smart continuity deposits throughout the story, giving readers absolutely everything they need to know to settle in and enjoy a Spidey tale.

While the cover carries Peter Parker’s name over Spider-Man’s, we only get one page of Parker unmasked, but at no point does this story not feel like a Peter Parker tale. Amazingly (see what I did there?) enough it does so without slipping into Spider-Man tropes or clichés. There’s smart-alecky comments and quips, but not at the expense of the story’s flow.

And the art follows suit. Bellaire does more than just bring the sunshine. She brings vitality and vibrance to the city, alternatively washing out the grimy details while dropping in the dusky shadows, giving depth to everything Kubert does. For his part, Kubert goes widescreen in his panels and page layout, as the first two spreads feature a panel nearly two-thirds of the combined page real estate, telling the readers about the world Spider-Man inhabits and his place in it. Kubert clearly is having a great time with this assignment, as he even throws in an Andre the Giant look-alike, and more cross-hatching-powered shading than every other new book on the comic rack this week.

Letterer Travis Lanham has his work cut out for him. Peter Parker engages the reader throughout Peter Parker: The Spectacular Spider-Man #1, at times excessively so. There are a couple spots that get chunky, but Lanham, Zdarsky, and Kubert work well enough together to bring it all home.

Peter Parker: The Spectacular Spider-Man #1 is a fun comic that introduces a potential romantic interest, a new technological ally, and a mystery that is given more depth via the issue’s backup tale. A last-page, cliffhanging reveal leaves Johnny Storm speechless, which only reiterates the fun Zdarsky has in store for readers.

The backup tale moves at a snappy pace, measured out more for subplot and future storyline seeds than for resolution or present impact. Spidey winds up fighting Black Widow, in a tale that wastes no time lingering. Drawn by Goran Parlov and colored by Nathan Fairbairn, “Spider-Fight” gives readers a quick, timeless bit that mixes action and mystery with a touch of humor. It’s a nice add-on to what is already a solid comic.

The market has painfully demonstrated that it has absolutely no interest in supporting a team-up title, but in the same regard, it has shown that readers will buy events. This comic – even though it’s only one issue! – feels like a little bit of both. In the span of the lead story’s twenty pages, readers get glimpses of Spider-Man interacting with the Human Torch, Ant-Man, and Captain America. Add in a surprise appearance at the end of the story and a Black Widow appearance in the backup tale, and Zdarsky, Kubert, Parlov and company treat readers to a healthy cross-section of the Marvel Universe without ever losing sight of the fact that this comic is a Spider-Man comic.

I’m not sure how tightly this will or won’t adhere to the other Spider-titles in the Marvel lineup, but based on the strength of this first issue, I’m making mine Peter Parker: The Spectacular Spider-Man.