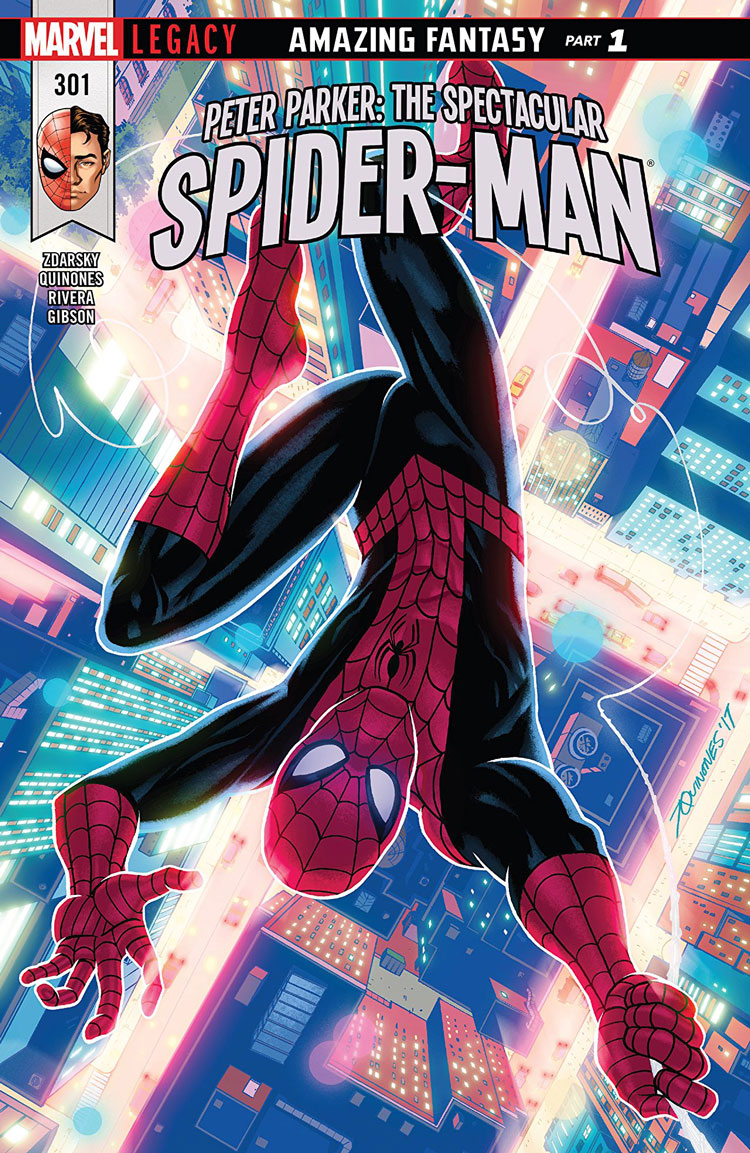 I’m late to the new Spectacular Spider-Man run; despite an original series issue being the first Spider-Man comic I ever owned. Specifically, it was Peter Parker: The Spectacular Spider-Man #51; a gift from my brother who had caught me sneaking into his bedroom to dig through his comics. With the return to Marvel’s Legacy numbering, I saw it as an exit and fell off the Marvel wagon, for quiet a few months. However, there was something about the preview for this issue that caught my attention.

The series has changed a lot from the text heavy, two fight minimum days, when it began. Instead of massive blocks of narration, the art and quick dialogue are allowed to move the story forward. Peter, his would-be sister Teresa, and Jameson have all been sent into the past of an alternate reality to learn what they can about the Tinkerer, in order to stop his alien invasion in their time. However, instead of just sticking to their mandate, they decide to play history fixers and get way more involved in the lives of their past selves than the average physicist would recommend.

Zdarsky’s humorous take is ever present, yet tempered to reflect each character and not be too wildly out of character or over the top. After recruiting his teenage self, Peter uses his time to preemptively prevent many villains from going on rampages. The downside here is that to appreciate many of these actions there might be a familiarity required with these former villains that a casual reader might not have. While they can recognize the Green Goblin or Doctor Octopus, an appreciated for where these interventions occur, in relation to Peter might be lost. It makes them both casual and enjoyable fight scenes as well as deep cuts for die-hard Spidey fans.

It also hints at time travel theories that dictate just because you change the past, time will find a way of correcting itself. Teresa Durand is sent off to investigate the Tinkerer. However, she seems to have personal, but benign, ulterior motives. Jameson also uses his contacts to not only seek information about the Tinkerer, but find a way right the wrongs of his past self. There is a great combination of light-hearted humor and regretful self reflection for our time-traveling trio.

Quinones art has an open and clean feeling, supported by Rivera’s dimensional inks and Gibson’s subtle and often shadowed or background gradient color choices. It’s also nice to see the classic Spider-Man uniform design, complete with upright Spidey logo and webbed wings. Seeing it in contrast to the current Spider-man uniform makes for some fun comparison both on the page as well as with older issues, if you have them laying around.

The facial structure between younger Peter and current Peter is also beautiful to behold. It reflects more of the changes people undergo as they grow-up. Younger Peter is more narrow, his face thinner and less square, and very much reflective of his on screen actor, Tom Holland. There doesn’t seem to be a straightforward choice in panel layouts in the issue; except for discussions between the time travelers and their alternative past selves or contacts. In those conversations, simple layouts, with clear gutters take over an provide a calming and serious tone to the exchange.

Action sequences are provided by the Spider-Men going around preemptively striking against past trouble makers. Intrigue is provided by the trio introducing themselves to past selves and contacts. This leads to introspection, on Jameson’s part. It’s a full introduction to a new arc. The drawbacks are that those who have not been keeping up with this new series might feel a little lost, despite the recap page. I had to do a quick minute of googling to catch-up. It also lead to me purchasing back issues, so perhaps it did do its job.

Regular comics readers or Spider-Man readers will be able to catch up quickly. The light-hearted feeling created by the dialogue and art permeates every page, despite the heavy emotional baggage created by the plot. It’s a fun read that I look forward to seeing where it goes.