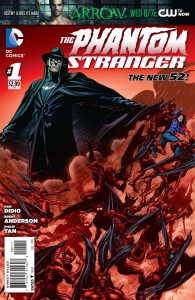 The Phantom Stranger seeks out his next source of redemption, and it is the young empathic hero soon to be known as Raven! On the run from her demonic father, all Raven wants is to learn how to control her powers, and she looks to this mysterious cloaked man for assistance. As we are beginning to learn, this Stranger has an agenda handed down from one high, and it doesn’t always turn out well for his newfound friends.

DiDio crafts an interesting second chapter (after last month’s Phantom Stranger #0) that starts to breathe a little more life, both literally and figuratively, into the title character. The Stranger has never been a particularly sympathetic character, but until this rendition debuted in DC’s New 52, he always seemed to be fair and just. Now, there seems to be a universal justice working behind the scenes, but it’s fairly opaque in its intentions. The Voice, as the Stranger’s mysterious master is called, may be directing the Stranger towards ever more cruel betrayals, but it’s the Stranger’s own growing insensitivity to the fact that is most disturbing — particularly in light of the surprise last three pages to this issue. True, the Stranger has a lot to lose (or gain, as the case may be), but the increasing horrors to which his victims are subjected may begin to pale in comparison to his own darkening soul. What good is redemption if you’ve already lost the use of your own conscience? I have a feeling we may find out soon.

I was fairly critical of Anderson’s pencils last month, but the results of this issue couldn’t be more different to my eye. The pairing of Anderson with inker Tan has an incredible lushness and detail that is precisely what I want in a horror book. The combination of well-placed shadows with an exquisite amount of line work make even the brightest, most picturesque settings seem deeply ominous. Their depiction of Raven’s soul self as a chaotic and destructive force is exceptionally beautiful streaking across the page. While I was really hoping to see her don her classic blue cloak in this issue, young Rachel was drawn to be exceptionally beautiful, if not far more visibly out of control than depictions in the past would render her. Overall, the only panel that wasn’t a singular work of art in itself was the full-page spread reintroducing Trigon the Terrible, as his anatomy was awkwardly (and seemingly not intentionally) distorted. It’s a miss that can be easily forgiven in an otherwise gorgeous comic.

I’m far more intrigued by Phantom Stranger than I was after its initial offering, and with the promise of ties to Justice League, Pandora and the future Trinity War event, I feel I’m definitely settling in for the long haul with this series. The potential repercussions for the Stranger, whether he rids himself of all thirty pieces of silver or not, have my mind reeling already. And with high profile victims such as the Spectre and Raven able to resurface in the DC Universe at any time, the time will come when this so-called sinner will have to answer for his betrayals all over again. I’m ready when they are.