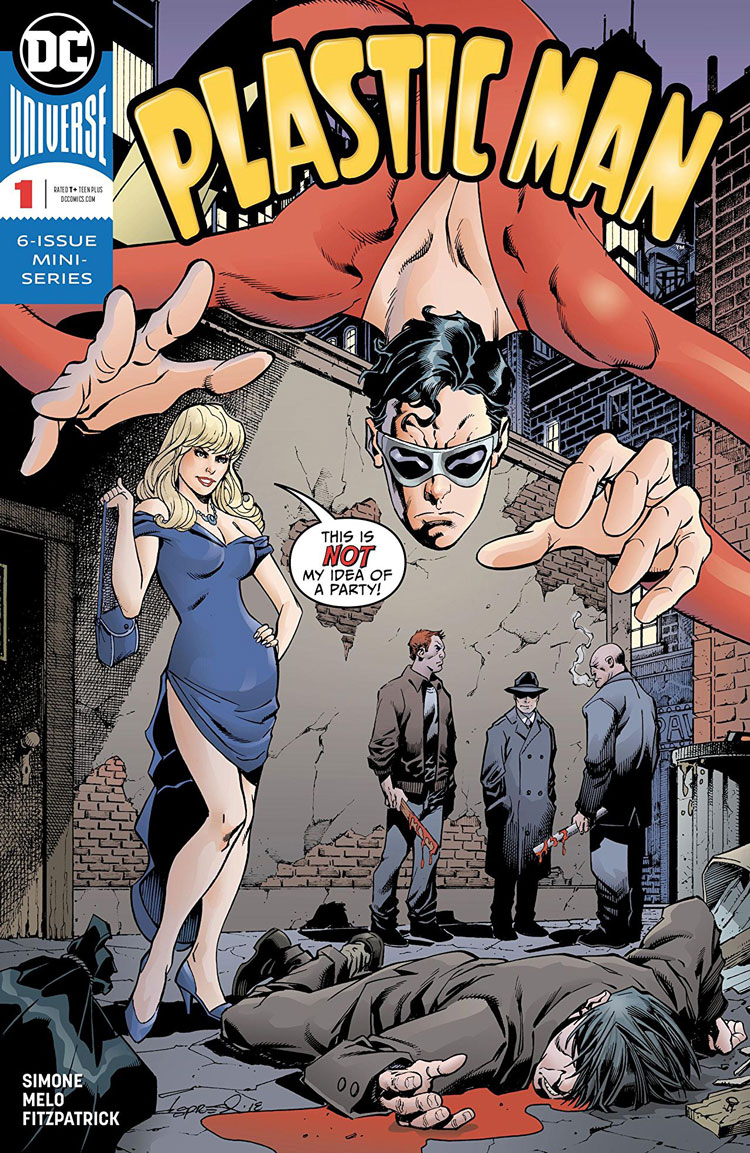 Reintroducing Eel “Plastic Man” O’Brian as he tries to balance work, a murder mystery, his recent death and mysterious resurrection, and thwarting a shadow conspiracy to take over the world.

Plastic Man is always a bit of a challenge when placed in the broader context of the DC Universe. In a world filled with characters who’ve gotten more serious and realistic as the decades have marched on, Eel O’Brian is a living cartoon character, complete with one-liners and wild takes.

Plastic Man #1 tackles the arguably more difficult task of integrating a more realistically-drawn version of Plas into the DCU as it now exists, while keeping the soul of the character intact, and it succeeds admirably. The comic opens on Eel O’Brian getting his knees broken by his low-life criminal associates, only to reveal, after they leave, that he’s fine thanks to his recent metamorphosis into a being composed of malleable, flexible, elastoid rubber material.

This version of Plastic Man is a bit rougher and more uncouth than some previous versions, making obscene references to the crime boss’s mom and sister, but he retains the same essential animating humorous spirit that the character has had since his first appearances in the 1940s.

The Plastic Man brought to life by Simone, Melo, and Fitzpatrick has a depth and sadness to him, but also never really wallows in it. The big mystery set up in this first issue is what happened the night of the heist gone wrong that turned Eel into Plastic Man and, more specifically and importantly to Plas, who shot the security guard who died that night. This is a Plastic Man who doesn’t particularly like or trust the superhero community, but is also fundamentally a good person who is wrenched by the thought that he may have killed someone the night of his transformation.

None of this should suggest that this is a grim-dark reboot of the Plastic Man we know and love. Amidst all the plot developments (and there is a lot of plot movement in this issue) there’s still plenty of time for humor, as when Plas uses his powers to confront an old friend with his real greatest fear, or when Eel goes to work at his job managing a seedy superhero-themed strip club (and in the process reveals that, if he’s not bisexual, he’s at least appreciative of a hot man in a thong), and an ongoing confusion over what, exactly, the meaning of the word Wang might be these days.

The art is exuberant, and fun, and appropriately stretchy, and surprisingly sexy. Melo draws plastic man in a style that’s simultaneously realistic and cartoonish, and gives all of her characters expressive faces that heighten the comedy. She draws Plastic Man with a six-pack (or twelve-pack, as the occasion demands), and deftly illustrates by example how Eel’s lithe form can be powerfully sexual when approached with the right mindset. Fitzpatrick’s colors are appropriately grimy and subtle and nuanced as called for when depicting the seedier parts of Eel’s world, but burst forth with buoyancy when he springs into action as Plastic Man. The art perfectly complements the writing to provide an engrossing visual feast.

Plastic Man #1 does an excellent job not only of starting out a new miniseries but also re-establishing Plastic Man in the post-Rebirth DC Universe. It perfectly nails Eel O’Brian’s voice and is a joy to read.