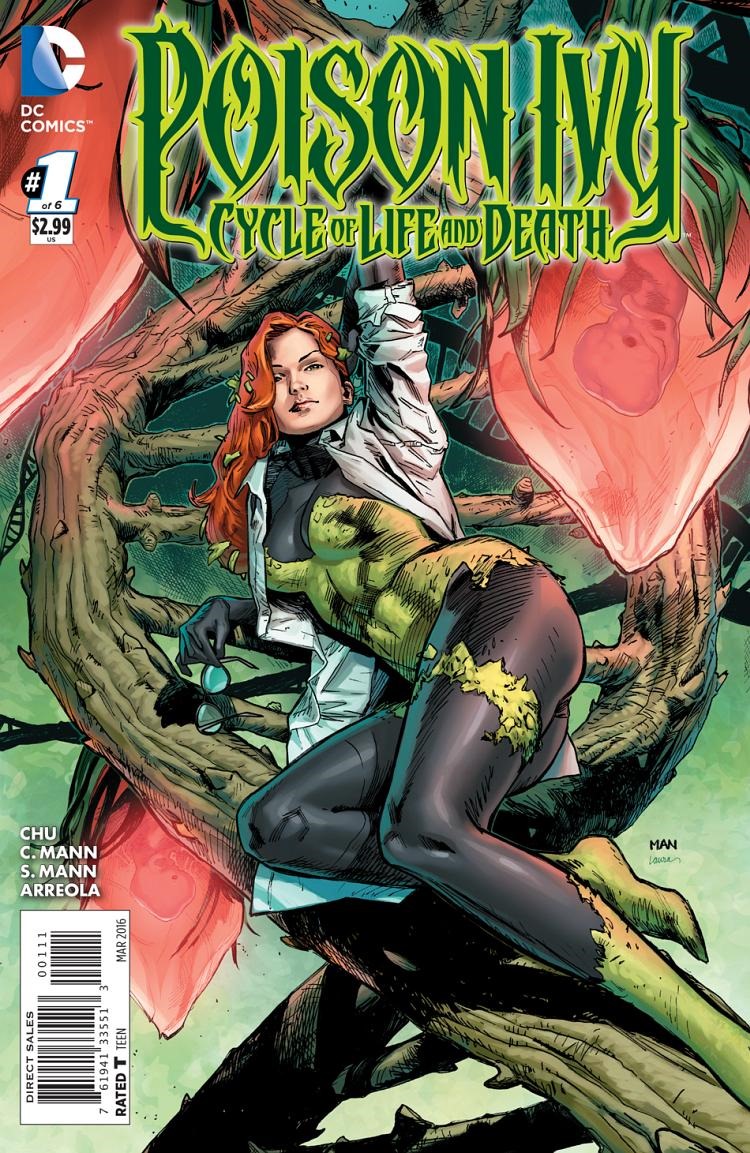 As much fun as the idea is of a Poison Ivy mini-series that would give her a stronger independent identity away from her cameos in Harley Quinn, the execution of Poison Ivy: Cycle of Life and Death is mostly an exercise in what happens when you plant an exotic flower in the wrong soil. It wilts.

The general idea of putting Ivy in a lab environment and working in themes of post-humanism — and even a wink and a nudge or two to Mary Shelley’s Frankenstein — has merit. Ivy is, after all, visually coded to embody original sin. In the manifestation of the major Batman rogues as products of Bruce’s fractured psyche, Ivy represents Bruce’s problems with intimacy, appearing as a temptress who robs him of agency through her kiss the same way that Eve is constructed as being at fault for offering Adam the apple. So, the idea that seems to be implied by the plant-human hybrids that Ivy is researching is that she’s found a way to reproduce human life without need for a male partner — another key anxiety of patriarchal masculinity for her to prey on. Unfortunately, there’s not much hope that if that is the case, the title will hold itself together to get to it.

The fundamental problem with the issue is that nothing seems to sync up from the writing and the art to Ivy’s characterization in any of her recent appearances. Everything appears to be working at cross purposes. The biggest one (and the one that makes the least sense) is how dull and lifeless the artwork is. Clay Mann works in a stiff hyper-realist style that comes off as overly posed and rarely manages to come up with an expression that lines up with the emotional beats implied by the dialogue. To make matters worse, the colors are dull and washed out, which is probably the most puzzling creative choice of all. A Poison Ivy comic ought to be full of lush, vibrant, and seductive colors. If you close your eyes and imagine Ivy, you’re going to see Uma Thurman walking over men’s backs, Terry Dodson’s version staring wide eyed through a bullet hole blown through a pillow, or Bruce Timm’s luxuriating in the dew soaked fronds of the Amazon rain forest. None of those enduring images translate here.

The tragic irony is that the Terry and Rachel Dodson variant cover works as a handy guide to point out everywhere that Cycle of Life and Death goes wrong. The closest thing to a truly iconic version of Ivy in comics is her appearances in Karl Kessel and the Dodsons’ Harley Quinn, but between that version, the Bruce Timm/Paul Dini helmed animated version, and Uma Thurman’s turn in Batman and Robin, it’s apparent that there’s a sensuality and vibrancy to the character that just isn’t in evidence here. 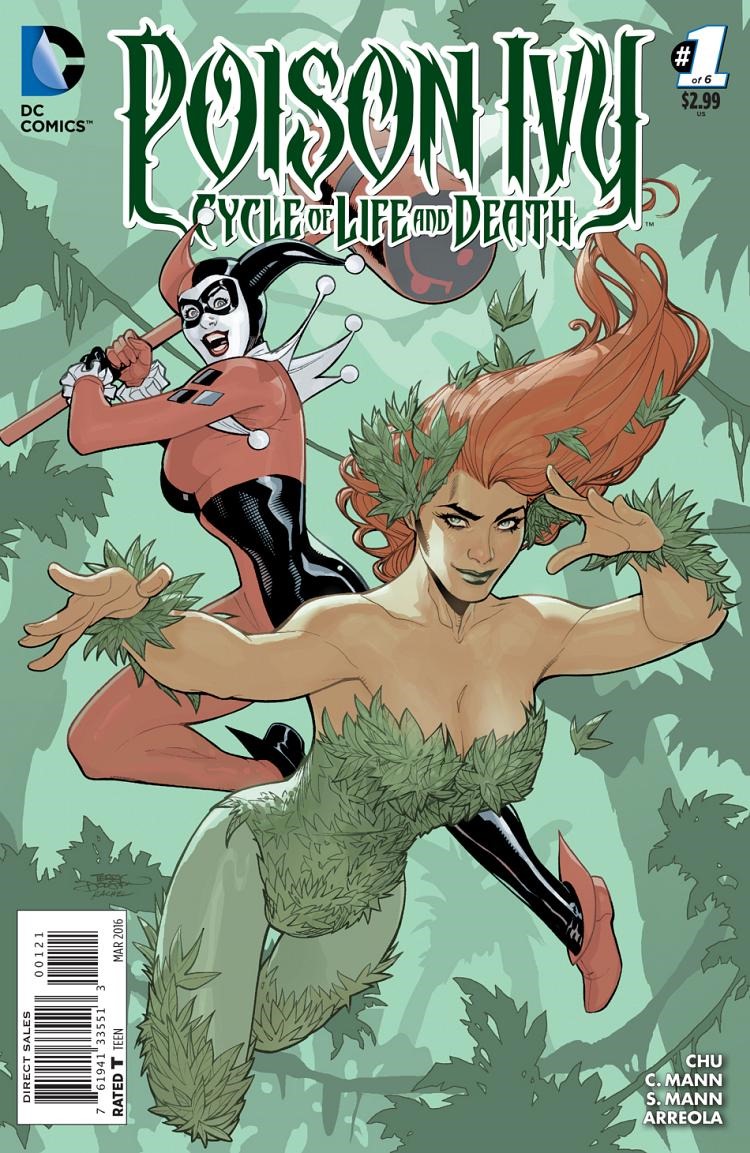 The biggest whiplash in her characterization isn’t just how dull and single-minded she is on her pet research project, but just how out of touch her interactions with Harley Quinn are. It becomes brutally clear that Cycle of Life and Death was produced far away from the Batman editorial group when Harley and Ivy begin sniping at each other. It culminates in Ivy accusing her of wasting her life on a “psychotic ex,” no doubt in reference to The Joker, which is a status quo that expired well over a year ago. Harley has been seeing Mason Macabre, who she is currently attempting to break out of jail, for several issues now and her own relationship with Ivy very clearly crossed over into the romantic last November with the first Harley Quinn annual. The character beats at work here read like a five-year-old issue of Gotham City Sirens.

Whether or not you ship Harley and Ivy, the key breakdown in their dynamic and Ivy’s characterization overall is just how alien it is to any of her recent appearances within the Batman group titles. Harley interrogating Ivy about why she would want to work in a lab and hold a job — when she herself juggles her psychiatric practice, roller derby, and managing her building on Coney Island — doesn’t make a lick of sense. For a title that should naturally appeal to Harley Quinn readers, Cycle of Life seems disturbingly unaware that title even exists.

As much as any single title — be it Batgirl, Gotham Academy, or Harley Quinn — tells a great story or delivers great art on its own merits, the most rewarding part of reading those books is how intimately connected and familiar they all feel when even a side character moves between titles. It’s one thing to remark on how well a marquee character like Dick Grayson can slide between titles as diverse as Starfire, Batgirl, and Midnighter with remarkable written and drawn consistency, but when the same applies to Killer Croc moving between Gotham Academy and two different Catwoman teams, there’s something special happening.

Swamp Thing, which was solicited alongside Cycle of Life and Death, was an incredible success because it was returning to a team that knew it intimately (even created it in the case of Len Wein). That the opening issue of that series might seem strange or off kilter for new readers more familiar with Scott Snyder’s work, say nothing of Alan Moore’s, wasn’t particularly problematic because it was very consciously looking to recapture the original. There’s not only a clear audience there, but an opportunity to open a window into a deeper understanding of the character’s history for anyone who started with the New 52 material as well. That just doesn’t track for Poison Ivy who is a prominent supporting character in DC’s second best selling title, which this very clearly does not tie into.