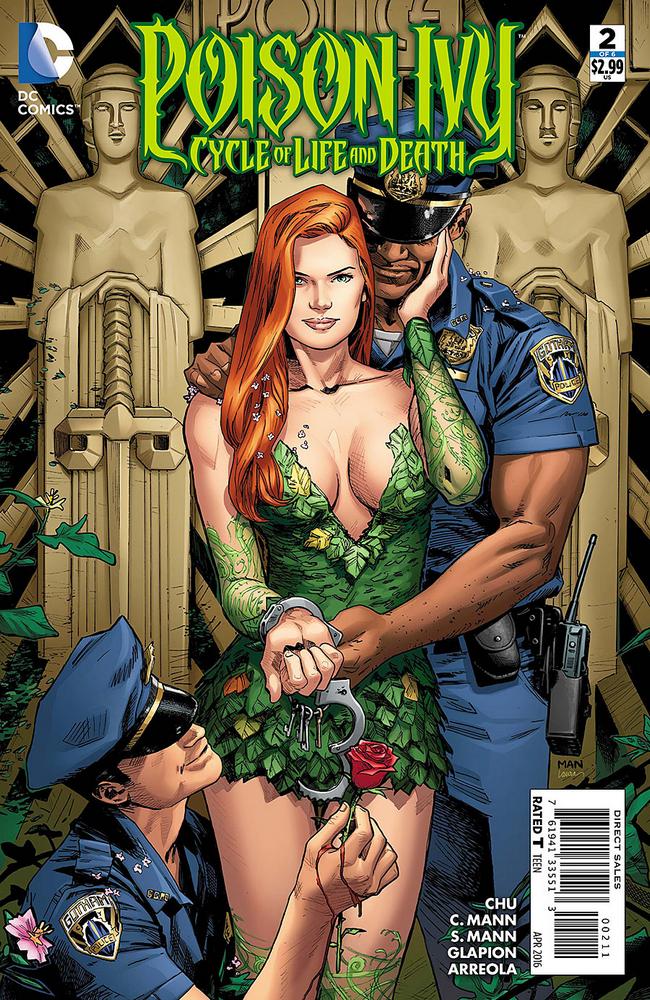 Dr. Pamela Isley has found herself in the center of a murder mystery. Only thing different: she’s not the culprit. The woman formerly known as Poison Ivy has managed to land herself a great job and is on the verge of starting a family. And it all might come crashing down, whether she’s ready or not.

So, after reviewing Batman: Harley and Ivy and reading this week’s Harley Quinn #25, looking at Poison Ivy: Cycle of Life and Death #2 is… interesting. On its face, this book has nearly nothing to do with any previous conception of the character, nor the prevailing version in current continuity that we’ve seen move through Birds of Prey, Detective Comics, Harley Quinn, and her own one-shot Villains Month special. And I can’t quite decide if that’s a good thing or not.

Let me say that I’m not a hardline comic book constructionist, in that I don’t necessarily want or need continuity to dictate stories. Continuity is a tool. It can be used. It can be set aside. It can also be reworked. I didn’t always feel this way, but age has made me prioritize good story over having a puzzle that fits perfectly across a line over 200 people are working on at any given moment.

Case in point, Justice League has stood apart from all the books running at the moment, telling a tale that feels classically consistent (and in some ways, far more consistent than the individual monthlies have). But where it fits in continuity? Who can tell? Before. After. Whatever. That can all work itself out in the wash.

The key problem I have with Cycle of Life and Death is that it doesn’t seem to want to fit anywhere. This isn’t the same characterization Ivy has had in her origin, five years ago, or even five minutes ago in her warm, loving (confirmed) relationship with Ms. Quinn. So, there’s that. But I guess the real question is, can I read this comic as an entirely new take on Poison Ivy, independent of any one I’ve read before?

I can. But I’m not sure the story works that well for me regardless.

Chu does an admirable job of setting up a mystery that almost takes on a noirish effect. Here we have a reconstructed femme fatale who’s beholden to no man or woman, center of her own story. It’s a surprisingly rare still story tactic that I’ve seen from Ed Brubaker across many of his titles — Catwoman, Fatale, Velvet — but feels right for a character like Ivy. I get the rejection of sex appeal clearly in Chu’s writing, and even though her dialogue runs a bit cold and stilted, it feels right for a character who is distancing herself from humanity.

Ivy is the Number Six (if I may be so bold as to insert a Battlestar Galactica reference) of Chu’s narrative, and we’re getting the story from her point of view exclusively. And that’s exciting and empowering. She’s deeply intelligent, has a sense of loyalty, but has a lot to protect in terms of her greater mission. With impending births, there’s a lot on the line. And while I’m curious if any mothers can find empathy on those terms with the character, it definitely carries with it a macabre curiosity that can easily shift the story into some seductive horror roots.

The problem is, the art is a complete mismatch for the narrative. Clay Mann’s pencils and layouts undo so much of what Chu is attempting to establish with Ivy, that I’m left somewhat astonished by the pairing. Chu has established this woman who owns her own sexuality to such a degree that she’s removed it from the equation, not using it as the classic Poison Ivy would. And not even reproducing sexually as a human would. But Mann’s illustrations crash that attempt with upskirt shots, odd thigh gaps, and otherwise static poses of Ivy in costume (not sure why, frankly) that feel oddly exploitative.

It’s as if Chu has taken the Ivy character so far away from who she’s been (good or bad) only to have Mann pull her back halfway. And it becomes a mishmash of mixed signals. The cover alone represents nothing of what this book is about, posing Ivy as a temptress with men of authority falling at her feet. There’s nothing this well worn in the story Chu is presenting. The production quality is very high, make no mistake. Mann has strong line and, while a bit static in flow, compelling layouts. But it’s not right for this story. At all.

Unfortunately, Poison Ivy: Cycle of Life and Death #2 shows that a good story and good art do not always add up to a good comic. The curation of the creative team is the issue here, not the effort put in. And sadly, no matter how you feel about Ivy’s characterization, change is going to go over much better when everyone is working toward the same goal.