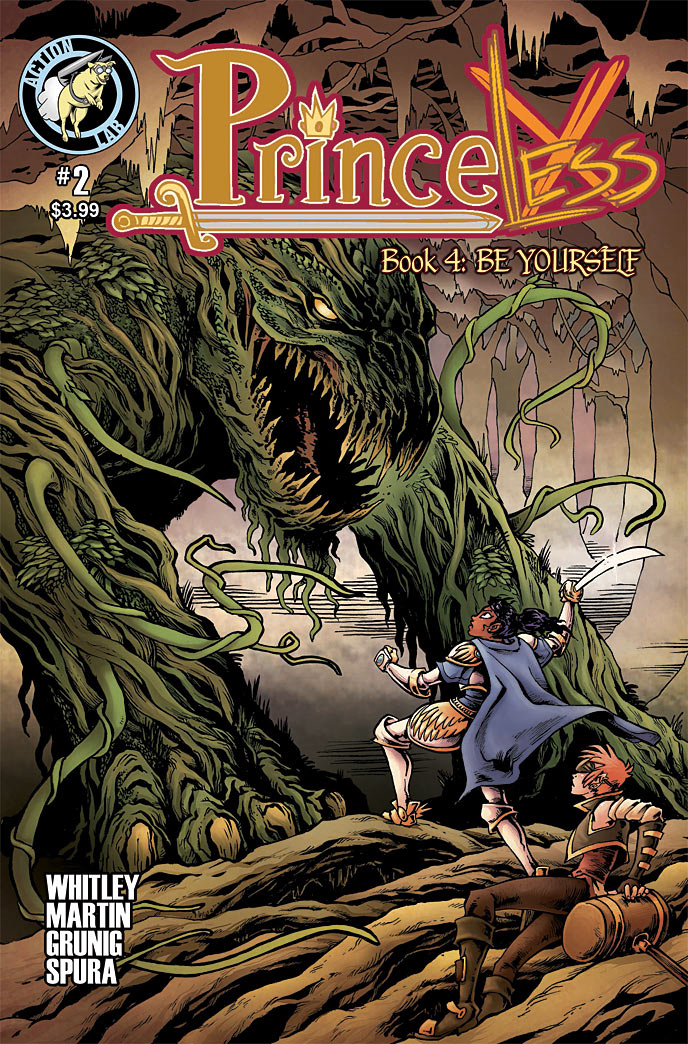 This go ‘round, we find Princess Adrienne and Bedelia in a less that ideal situation. Hanging from trees while your goblin captors throw around words like “massacre” is not exactly what they had in mind when they set out to find Angoisse, after all. Meanwhile, Prince Devin is busy making preparations for his own quest while explaining to his father that not all weapons are swords (we may not have seen the King facepalm, but I think it’s safe to assume it was there). To make matters more interesting, aggressive werewolf, Kira is ordered to accompany the Prince as his protector. Hijinks, undoubtedly, shall ensue.

It really seems as though I fall just a little more in love with Princeless with every issue I read. Whitley really does have a magical way of creating characters with which the reader can instantly connect (up to and including horses). One of the main reasons we can connect to his characters is because of how incredibly real they are. These are essentially kids forging their way though their parent’s world and struggling to be accepted as they are regardless of the expectations of those around them. It’s pretty safe to say that nearly every kid who is growing up reading comics (or grew up reading them) can relate. To top off the relate-ability of the characters, Whitley continues to deliver a level of representation few others can boast.

When creating characters, it’s a difficult task to get their personality across to the reader in general. When those characters have little to no dialogue it’s up to the artist to portray their personality, and Martin steps up to that challenge without breaking a sweat. She skirts the line between artful expression and cartoonish flourish brilliantly, and she absolutely brings Whitley’s characters to life.

I cannot recommend this series enough, especially to young adults. These books are going places and touching on topics that we deserve to see more of in our modern day comics, and they’re managing to do so with unmistakable, ingratiating sincerity.