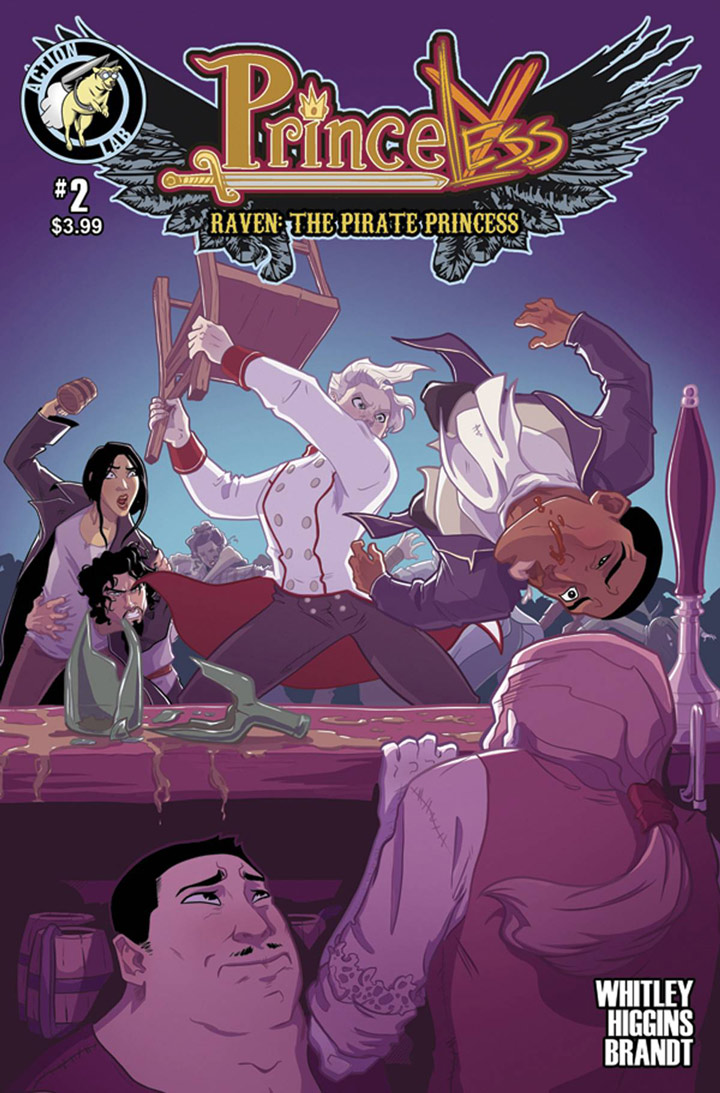 Recovering from her encounter with the woman who picked her pocket, Raven lands among friends for a spell. But how is she going to assemble a pirate crew with barely any money and an empty stomach? Even with a little help from her friends, the Pirate Princess has a serious chore ahead of her as she begins to interview men to man her ship.

OK, I’m not even going to mess around on this one. I’m just going to say it outright.

If you are a woman on the internet, you need to read this comic.

No, not because you need to support diverse characters (although this has that!). No, not because it’s an indie book looking for a vocal audience (although it is!). No, not because it features a cast of women that you’ll find charming and heroic and inspiring (well, actually, yeah kind of that.). You need to read this comic because it could literally have been scripted off a typical day online. And it’s uproariously funny as a result. Would that the real life, online versions of this issue were as funny.

Imagine, if you will, every terrible male reaction to… let’s just say, being a woman and having an opinion, however minor, about… oh, anything. Put them all into pirate gear and plop them into a tavern to be interviewed for a job by our leading lady. It is beyond hilarious, and inspired in me at least, one sustained, literal laugh-out-loud moment after another. It was all so funny, I immediately had to share this one set of panels with four different friends, just to prove it was that funny. 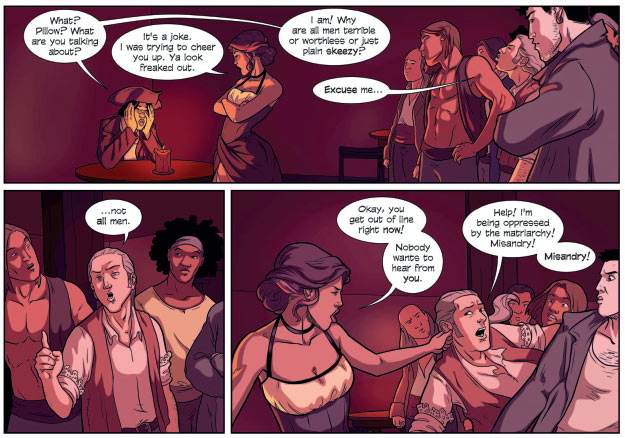 Whitley knows his stuff. He pays attention. And he infuses this insane behavior with the mockery it deserves.

That’s not all there is to love in this issue, but wow, it certainly would have been enough to love all by itself. About half the book is devoted to this lovely banter from Raven, Sunshine (the pickpocket from issue #1), and a number of new, equally interesting characters — all while MRA-style would-be pirates try to ply the princess with their less than charming selves. The other half introduces bits of Raven and Sunshine’s pasts, including that Raven’s family was always a matriarchy until her father’s generation, which is so lovely to present in an all-ages book with a female star.

The pacing is beautifully handled, so even though there is A LOT going on in this issue, and quite a lot of dialogue, every character feels well-represented and developed. You really get to know each woman from the very first panel they appear in, and that really forms the crux of what Whitley is doing best here. I care about every last one of them.

The artistic team of Rosy Higgins and Ted Brandt do have a challenge at their feet for an issue that relies on dialogue and monologue so heavily, and they come through for us with flying colors (somewhat literally in places). The facial expressions confer so much of the emotion of the moment, from Sunshine’s puckered reaction to Raven’s call for vengeance over a plate of eggs and salmon, to Raven’s absolute transfixed stare at Sunshine’s… ahem, assets… when she takes to dancing on stage. I also have to say, Jay has some of the best reactions in the issue.

Linework is crisp and economical, and the color work is particularly beautiful in the tavern scenes, where purples and yellows contrast and blend to add a really pleasant glowing effect to everything. It keeps the moments light and serene, even when the panel structure is broken with a chair swing or two.

A super fun, super funny, and superbly written and drawn comic, Princeless: Raven, The Pirate Princess #2 is definitely the can’t-miss issue of the moment. Infusing this fantasy world with the lunacy of our every day gets it to the finish line, but doing so with genuinely smart and interesting characters is what pushes it over for me. This is a book that anyone of any age can enjoy, but the true secret is, you’ll probably get even more of a kick out of it if you as bored of collecting falsely put-upon male tears as Raven is. I know I am.