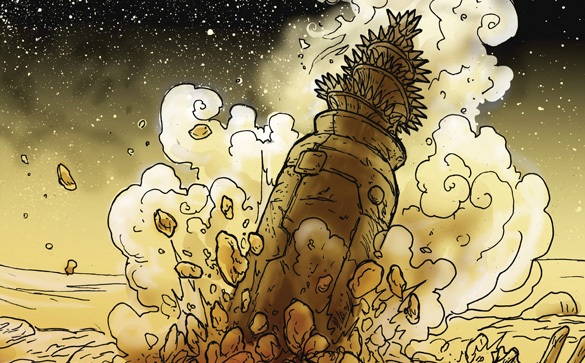 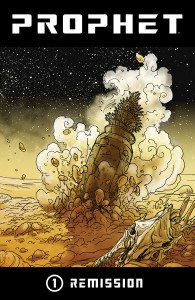 First off, I would like to thank Rob Liefeld for letting Brandon Graham have free reign with this character. Gone are the bulging muscles and biblical references, replaced instead with surreal landscapes and true science fiction concepts. Essentially the only thing this new volume of Prophet retains is the numbering and the main character, John Prophet. This time though, there are multiple John Prophet’s, all progressing toward a singular goal.

Brandon Graham’s script is detailed without being tedious. He introduces the important concepts of the world we are looking in on, but maintains the focus on the Prophet character and his mission. I was truly impressed with how far this book goes into the realms of science fiction. Though at times the plot can be hard to follow because of the conceit behind the multiple Prophets, it is still an engaging story that makes you want to read on.

The art style is visceral, with a Moebius like quality to it. Simon Roy’s style really lends itself to the new storyline that is being told here. The aliens are suitably alien, as are the worlds they inhabit. His art seems equally at home on terra firma, as well as out in space. Even where there is no text, the story is moved ably along, a fine example of the ‘show, don’t tell’ method of story-telling. The more you look, the more you find, and that makes for a great comic book.

I spent the first couple of issues of this collection trying to resolve this Prophet vs. the earlier Liefeld version. Once I allowed myself to be swept away by the story, it was like I was inside the alien world with Prophet; the story is so engrossing, it became like there was nothing else around me. This is a very different take than the original, but at its core, it is simply an excellent comic book; that is all one can ask when deciding what books to put your money into. Prophet is well worth the investment.