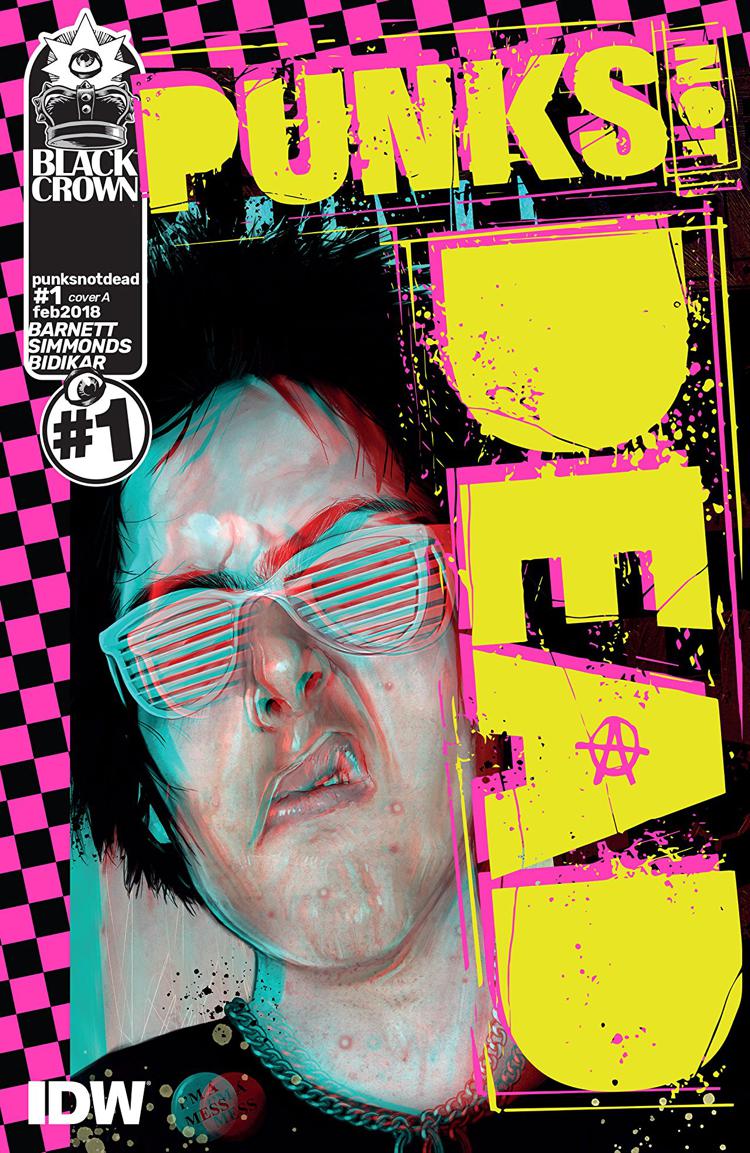 There’s a school of thought that believes punk’s defining characteristic was obnoxiousness. For these people, Sid Vicious is the most important icon of the 20th century, not so much for who he actually was but who he represented: the “lazy sod” masses not only left unchecked but granted celebrity status.

It’s this thinking that led to the rise of sophomoric pop punk in the ‘90s and it’s this line of thinking that now leads us to David Barnett and Martin Simmonds’ Punk’s Not Dead, a comic where the literal spirit of punk is portrayed as an obnoxious caricature of Vicious who becomes the rude invisible friend to a lost and lonely teen.

In a perplexing afterword that seems designed to get himself off the hook for his character work, Barnett explains that the Sid of Punk’s Not Dead likely isn’t the ghost of the actual Sid but a manifestation of the Spirit of ’77, meant to invoke the filth and the fury punk symbolized to polite society. In a sense, this is what pop culture has done with Sid Vicious since 1979, morphing him into an embodiment of sexy rudeness before his ashes could even be scattered to the winds.

Were Punk’s Not Dead to tackle the question of what happens to the patron saint of 20th century rudeness in a century where the rude are mainstream with wit and intelligence, this would be a fascinating comic, perhaps even a vital one. Instead, Barnett falls prey to the problem far too many aging punks have: the ability to only look back, never forward. Or as David Berman so eloquently put it in the Silver Jews’ “Tennessee,” “Punk died when the first kid said/‘Punk’s not dead, punk’s not dead’.”

Naturally, Ghost Sid’s chief complaint in Punk’s Not Dead is that Fergie, the morose malcontent boy he now finds himself bonded to, has no idea who he is. “Don’t you know who I am? I’m facking Sid!” he shouts during their first encounter, before dropping his pants and mooning a room of other people who can’t see him — and probably wouldn’t care even if they could — no matter how many forced Sex Pistols references he makes while shouting at them. It’s not that Sid cares that he’s no longer living (if he ever really was), it’s that in his current form, no one can pay attention to him and hardly anyone remembers his name or what he did or why it was shocking.

The problem is that the comic’s tone is so inconsistent it’s difficult to discern how self-aware this scene is. Taken along with Barnett’s opening and closing backmatter essays, it seems the intent isn’t to acknowledge that flawed icons like Sid Vicious get lost to the dregs of history because future generations rightfully move on, but to chastise those future generations for not respecting their predecessors’ heroes (even though they were, in many instances, thoroughly despicable rapists and murderers and misanthropes).

Barnett’s introduction even pinpoints Frank Sinatra and his Rat Pack as the type of music rock’s first pioneers were attempting to dethrone which is an interesting example to bring up since Sid not only took a lot from Frank’s playbook of brutal misogyny but also charted with a cover of “My Way.”

This problem of cherry picking the idols and revolutions of the recent past extends beyond the pages of this particular comic and right into the real world it’s being published in.

Punk’s Not Dead is part of the initial line of Black Crown, an imprint headed up by Shelly Bond, formerly the editor of Vertigo, the boutique branch DC set up after the success of Sandman, Saga of the Swamp Thing, Hellblazer and Animal Man. For the most part, Black Crown as an imprint has dealt in nostalgia, unleashing a wave of titles that lifelessly mimic the meta-mystical shenanigans and earth tone hues of mid-90s Vertigo comics. Meanwhile, DC has launched Young Animal, an attempt by uber-fan Gerard Way to mostly recreate the Doom Patrol-era of pre-Vertigo, while Vertigo proper floats adrift. Its titles thankfully are not looking much like the comics that spawned it or its ‘90s boom, but also not holding the interest of this Vertigo faithful.

The entire situation is an ouroboros of cultural pillaging, or what music scholar Simon Reynolds coined “retromania” in his book of the same name. Reynolds argues retromania works differ from antiquarianism because they fixate on “pop culture you already experienced the first time around.” He isolates punk as an especially susceptible genre for this phenomenon. If Reynolds had come up as a comics critic rather than a music journalist, though, he’d likely agree comics is punk’s retromania stretched out across an entire medium.

Reynolds warns pursuing retromaniac impulses could have a negative effect on the development of new art. In his view, such behavior is a sign of “nostalgia stopping our culture’s ability to surge forward,” offering nothing of real value in return, just endless references to things from living memory with no regard for whether they fit together or whether the people throwing them together have anything interesting to say about them. Though not everything Black Crown and Young Animal release is guilty of this, more often than not their titles display an inability to nod to the past without being constrained by it.

What separates these three lines, however, is how they connect their shared past to the future. Black Crown wants to pretend the Vertigo of the ‘90s never went away and thus has no interest in the future. Young Animal wants to update the Vertigo comics Gerard Way loved as a youth for the comics readers of today and tomorrow. And Vertigo itself is desperately trying to get away from its past and carve out a new future, even if it’s a future that never reaches the height of its initial boom.

Punk’s Not Dead is published by Black Crown and shares Black Crown’s fixation on the tone and aesthetics of the ‘90s but like the comics of Young Animal, it also seems to hope to reach that coveted new audience (issue two’s cover even has Fergie sporting a shirt that says “WTF is Joe Strummer?”). Where I believe it struggles is in understanding how to engage with anyone below the age of 40.

This is likely because Punk’s Not Dead seeks to fuse together two realms that struggle to move on from their own recent pasts, and thus lacks the dangerous vibes of punk and is also off-putting to people craving something fresh. The representation of Vicious that Barnett and Simmonds provide in the comic is a perfect example of this, since it splits the difference between Gary Oldman’s cinematic portrayal from 1986 in Sid and Nancy and the Hot Topic-ification of Sid in the late ‘90s and early ‘00s. Barnett even writes Sid like a cross between the rude invisible friend in Drop Dead Fred and Christian Slater’s pirate radio personality Happy Harry Hard On in Pump Up the Volume, making the ‘90s vibes inescapable.

Point being, Punk’s Not Dead pines for a version of Sid Vicious that only ever existed in what came after him, as romanticized as the endlessly replicated photo of James Dean walking with his head down and his hands in his pockets. This is Sid as the gutter Romeo fantasy, not Sid the dangerous, violent criminal, Sid the actual human. This is the worst kind of conversation with the past, a thoroughly one sided one where the truth doesn’t matter and the “spirit” of an icon is given higher value than the life they lived. Is it any wonder the generations coming up now are abandoning hero worship in favor of honest reckonings of artists and the larger movements they emerged from?

Punk’s Not Dead’s shallow understanding of the movement that gives it its name becomes even clearer when you dig into the visual end of the book’s pillaging. Simmonds’ channels the Duncan Fegredo realm of the Vertigo style, with that splattered psychedelia vibe that made Kid Eternity stand out in 1991. So many of those first books that led to the founding of Vertigo utilized the aesthetics of punk’s mortal enemies the Mods and their successors in rave. The enthusiasm for hallucinogens Vertigo stars like Grant Morrison espoused matched up well with those visuals, particularly since they were pretty well entrenched in the Madchester rave culture in real life.

In a purposefully bratty punk title, rave culture psychedelic flourishes are ill-fitting, even more so when you factor in Dee Cunniffe’s hyper clean color flatting. You can’t get much more jarring than some DIY punk collage letter titles over a psilocybin colored background and there’s no sense that either Barnett or Simmonds are trying to comment on how punkdom eventually gave way to a culture that replicated the style of the hippie generation they were attempting to revolt against while maintaining an even more hardline DIY stance than the punks.

Nonetheless, Barnett barrels forward, further Brundleflying these worlds by giving Punk’s Not Dead a decidedly Hellblazer-esque background narrative involving a secret government agency dealing in magic incidents nicknamed D4. This storyline is visually a better fit with Simmonds’ art, particularly its focus on D4’s sole permanent employee, a mad Mod holdover named Dorothy Culpepper who functions as a kind of government sanctioned John Constantine. We’re introduced to Culpepper as she’s removing a creature called a “slur,” Hell’s equivalent of a rat, from the prime minister’s offices. Culpepper suspects the slur is an early sign that something far more worrisome has been loosed upon the world and the indication is that it’s our faux Sid.

These areas of Punk’s Not Dead do function better than anything involving Culpepper (particularly once she vocalizes her views on subjects like “diversity hires”) but that doesn’t say much. The few scenes that do work in the comic, such as the moment before Sid is introduced and Fergie is trying to connect with his mother, do so because of Simmonds’ ability to communicate real sorrow and longing in the face of his characters. The people Simmonds draws look, act and dress like real human beings, with the full weight of their worlds noticeably resting on their perpetually slumped shoulders.

Except Sid, who mostly just looks like Gary Oldman in Sid and Nancy but gangrenous. Unfortunately these emotional beats ultimately give way to the inevitable Vertigo mystical cliffhanger at the conclusion, like Books of Magic and The Unwritten before it.

Honestly, you could do a drinking game where you spot the Vertigo title Punk’s Not Dead is ripping off in any given panel— a bit of Books of Magic here, some Shade the Changing Man there— and you’d end up as shitfaced Barnett likes to make himself out to be in the backmatter. But the interest in nodding to all that came before means the book ends up feeling devoid of original ideas or concepts.

In a book dedicated to the power of obnoxiousness, that lack of fresh ideas is undoubtedly its most obnoxious quality. Stealing from what’s come before you is all fine and good (just ask Eliot and Joyce and Jobs) but there has to be some innovating, some spark of ingenuity. By failing to do this, this book has only proven that while punk may not be dead, in its hands it’s something even worse: useless.