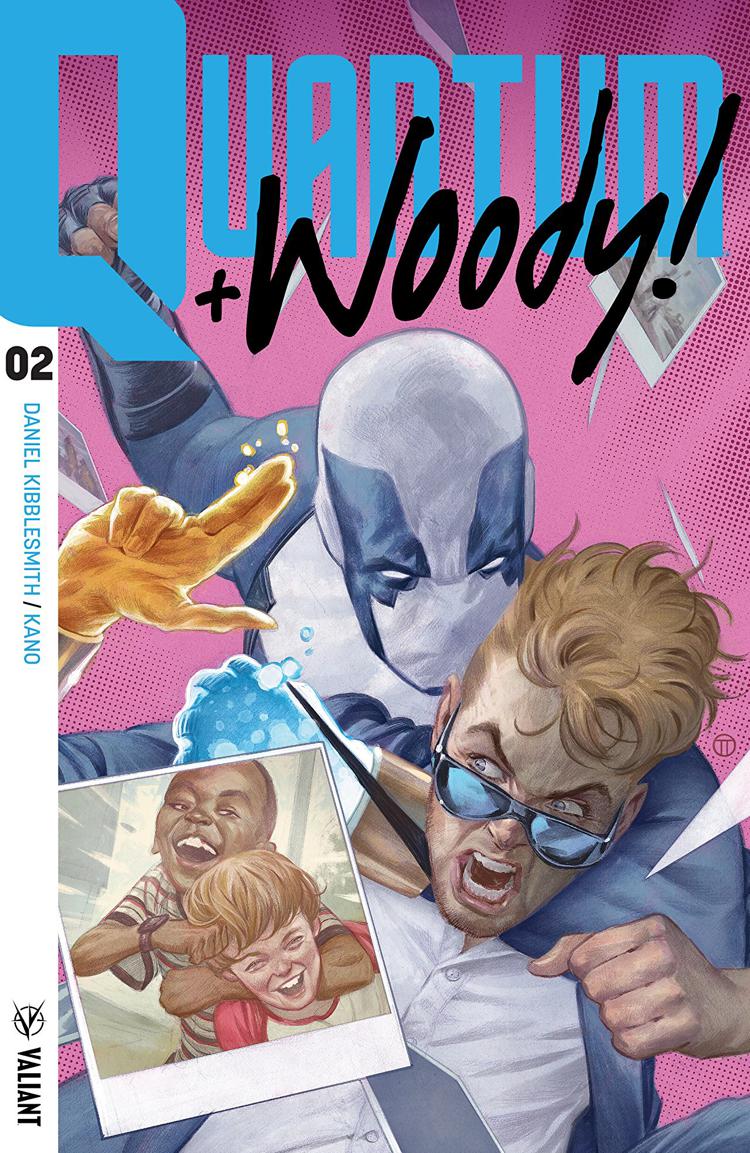 This has been one of the greatest fifth weeks of comic books ever, and the uproarious Quantum And Woody #2 is a great factor in me making that declaration.

The Valiant duo of half-brothers bonded together by the need to physically contact (through the comic book science of the KLANG!) one another every 24 hours less they cease to exist has long since been a source of comedy and drama. Yes, a lot more comedy than drama, but whenever family is involved, there’s always drama. When it’s not your family, that’s where the comedy comes in.

Writer Daniel Kibblesmith, artist Kano, and letterer Dave Sharpe recognize that, tip the balance, and appear to have a tremendous amount of fun doing so. Each of the three creators do such a great job on this comic, bringing their absolute best craft that I, honestly, forgot to check the credits and just dove in, as though this were a live feed instead of a comic book, with all of the talents involved blending into one stream of output.

Any one of those three could be lauded for their own tremendous individual contributions to Quantum And Woody #2, but the comic hits so completely because they collaborate. They amplify each other’s strengths, distract from any weaknesses (so much so that I honestly don’t see any), and give us a comic absolutely packed with comic bookiness.

That said, Kibblesmith has clearly immersed himself in the historical adventures of these brothers, bringing plenty of goofs, good-natured animosity, and brotherly hate to this story, playing right into Kano’s knack for detail, while also challenging his artist to have some fun of his own.

One scene in particular involves a chase through the Wherehouse (top secret weapons depot) that had me laughing out loud, stopping, checking to see if I disturbed anyone (I was at the dentist office), realizing I didn’t really care if I did disturb anyone, because this comic is just that amusing. The waiting room was empty, save for one tween who was trying like heck to ignore me anyway, and I’m not sure a bomb would have shaken him from his earbud-induced daze.

Kibblesmith packs this issue with drama and sneaks in a few gasp-worthy revelations before Quantum And Woody #2 ends. There’s plenty of conflict present in the pages of this issue, as Woody has to measure his circumstances, determine his loyalties, and act upon them- all of which would be an issue in and of itself elsewhere, but here, well, it’s Woody, and he’s not exactly the most reliable person. Predictable? Sure. Reliable? No.

Kano draws into the zaniness of the situation, and amplifies what Kibblesmith has given him. A hulking shrub-monster in a scooter sidecar? Yeah, he can do that, as well as cutaways in the warehouse, weapons in Wherehouse, and multiple (maybe dozens?) different expressions of exasperation throughout this issue. Kano colors his own stuff here, owning the art from paper to pixel, and this comic shines for it.

Quantum And Woody #2 is the type of book that is firmly ensconced in the fantasy of super-powered beings, but it has dabblings in noir, mystery, not-quite-horror, and slapstick, all of which blend amazingly well in this issue thanks to Kano’s craftsmanship. His storytelling is no less sharp, but every bit as playful, from 15-panel grids to facade cutaways to Family Circus style meanderings, no two pages are delivered the same way. The manic energy of the story is amplified by the creative energy of the layouts and the detailed delivery to page.

Dave Sharpe’s letters are no less imperative to Quantum And Woody #2 being a solid issue. Not only does the letterer have a substantial amount of dialog to work with, but that dialog ranges from bellowing rage to humorous tightly-shot whispers barely audible over the chaos. Sharpe does a great job balancing form to function, as Kano tightens shots, word balloons might remain the same size, emphasizing the proximity and (for lack of a more Quantum And Woody appropriate word) intimacy of the scene.

In addition to the sibling rivalry, Quantum And Woody #2 also delivers more on Negative One’s sway over Woody, a surprise revelation about the Company Men, and some chuckle-generating Goat scenes.

All in all, Quantum And Woody #2 is a comic book’s comic, packed with surprises, fun, fisticuffs, absurdity, and conflict. A mystery or two and a pinch of suspense and this comic couldn’t possibly have anything more to offer readers. Which is just fine. What else do you really need in your comics?