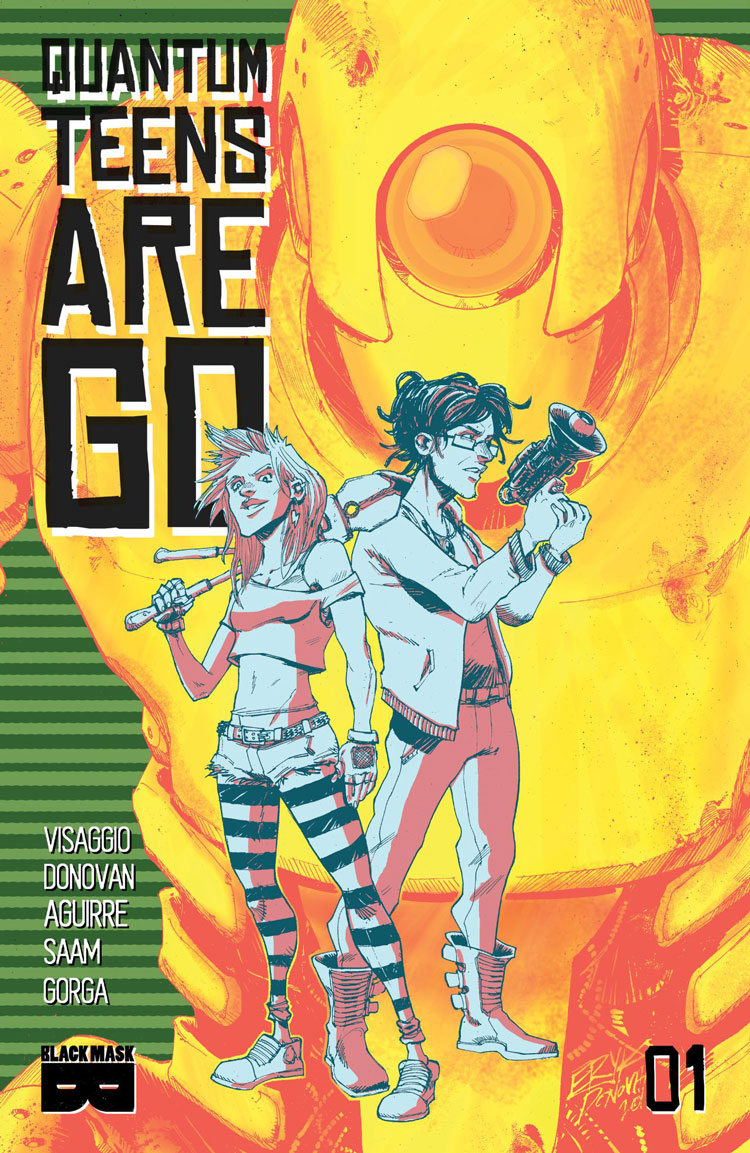 In the underground world of exxies, people strive to join major superscience teams. Nat and Sumesh, a teen duo struggling just to get the parts for their invention, get one step closer to completing their application project for the infamous Odyssey team in this first issue of Quantum Teens are Go, but at what cost?

Visaggio’s world is amazing. While many elements ground it in the reality we know far too well, especially the mixed reaction to a transitioned transgender young woman, the fantastical is there within it’s robot punching, tachyon particle experimentation, and rogue bands of stealing inventors. I love the dialogue throughout the issue. Lines like “Break it up, you two! This isn’t a telenovela!” and “Who the hell is this poor man’s Matthew McConaughey” just make me smile. I also love the relationship between Sumesh and Nat. They have a great rapport and a magnetic chemistry.

Donovan delivers in art. Each character has a subtle element that make them more distinct and unique. From Zero’s arm tattoo to Sumesh’s Star Wars t-shirt, there are these small details that make it feel like Donovan really gave each character attention. It’s not just the characters, either. Backgrounds have these special touches, like the old pictures of “Brandon” on the wall as Nat walks down from her room to the sprinkles of light from Los Angeles in the splash on the first page of the comic.

Aguirre’s coloring really sets the tone and time of a scene. She does well in portraying a realistic amount of light in each scene. I also love that she chose what looks like a paradise pink whenever a character is emphasized and there’s no background. I really like that color choice, it’s rarely used and just looks great.

I also have to commend Zakk Saam on his lettering. I love what he does with the action lines. He gives every “KLANK” and “SHOMP” it’s own little personality and it’s nice to see that kind of variety while reading.

Read Quantum Teens are Go. It’s fantastic. I don’t even get all the fancy shmancy theoretical science that’s going on, but it’s a super fun read with well-written characters that has an intriguing twist at the end. Reading this makes me want to read Kim & Kim to see Visaggio’s breakout Black Mask hit. But seriously, do read Quantum Teens Are Go.