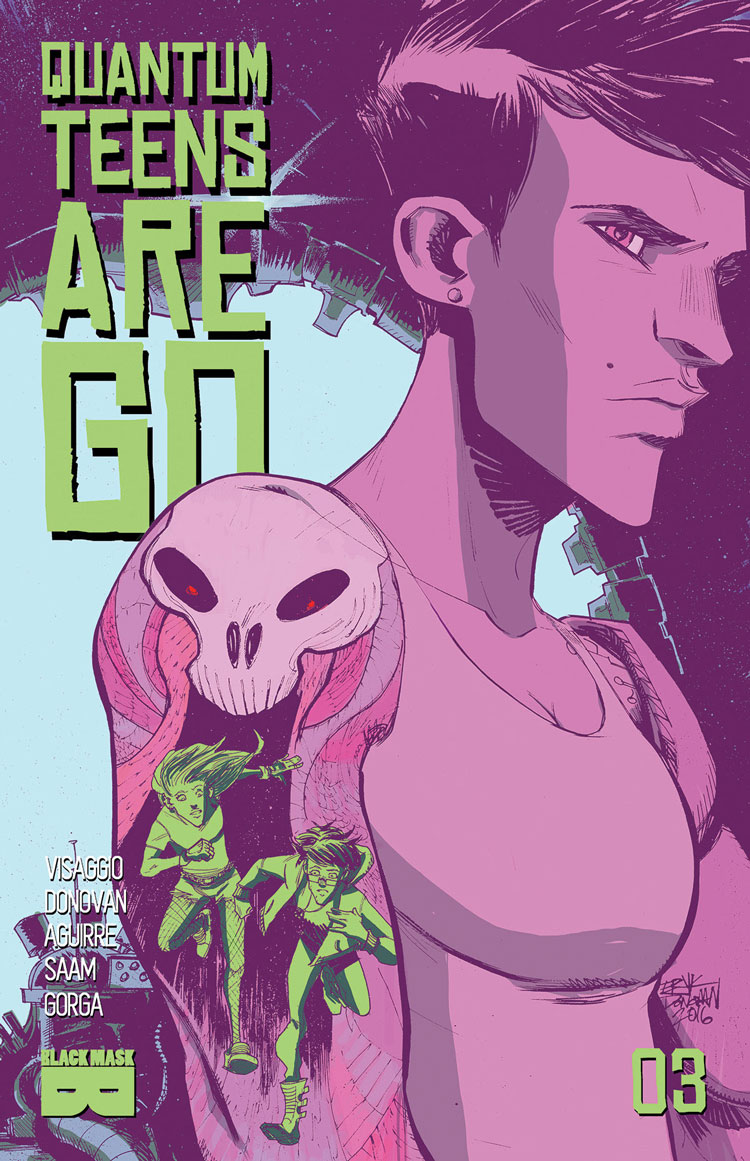 Sumesh and Nat are getting closer to finding the missing link in their time machine design, but nasty hooded visitors, rival teen scientists, and lack of resources are getting in the way left and right. How much longer until they get to get the shit out of this place already?

Something Magdalene Visaggio does better than almost any other modern writer is create worlds that are woefully complex and deep in their details without leaving her audience feeling in any way lost or dropped into no man’s land. The environment of Quantum Teens Are Go is deceptively different from our lives today in ways that unravel every single issue but still don’t feel alienating in the least to the reader’s comprehension.

Part of that agility is giving enough detail in matter-of-fact fashion that it doesn’t appear explanatory. It’s like being dropped into an environment in media res, even when the narrative isn’t. As a result, we have a deep understanding that there is a thorough and complex history to each of the characters’ lives and the world itself — and an assurance that the world will likely keep turning even beyond the final page of the story. Some might call that loose ends. I believe it’s about creating breathing space and natural believability.

There is a whole lot about Quantum Teens Are Go that echoes that sort of naturalness — particularly the dialogue and relationship cues between Sumesh and Nat that continue into this third issue. They don’t feel performative or expository, but genuinely reactive to each other as a living couple, albeit snarky teenagers. It’s fair to say, I don’t much like either character, nor really any of the characters in the boo. But I doubt it’s the point that I should.

For one, I doubt they’d give a shit if I did, and that I can know that after a matter of three issues is pretty brilliant character construction on Visaggio’s part. Secondly, I may be a bit long in the tooth to find their teenage angst as compelling as I once might have. And more’s the point that it feels genuinely irritating to me. Another indication that the writer knows her stuff. At 42, there’s no reason these characters should resonate with me, but their technical prowess impresses nonetheless.

Donovan’s pencils and inks and Aguirre’s color work combine to make a distinctive environment for the cast that feels both futuristically grimy and sort of banal at the same time. The shadow and anglework on the first three-page sequence of this issue is exceptional, but a lot of the issue doesn’t have the same expressiveness to it.

The inkwork in particular doesn’t feel like it’s adding to the pencil line, and is roughing in at a breakneck speed that feels like it’s giving up nuance. Visaggio appears to be stepping back on dialogue and leaving a lot of room for the expressiveness of the panel to come through, but the art just doesn’t meet it in the middle for me.

Overall, Quantum Teens Are Go is probably not a series designed with my current sensibilities in mind, but its technical proficiencies in writing and crystal clear point of view make it a very worthy read, particularly if you are still reeling from those moments of childhood where you wanted to leave more than anything. If you had a super happy, was sad to leave for college, prom queen-type childhood, I’m not sure Sumesh and Nat are going to resonate for you. But man, if you ever wandered about counting the day until you could get out of your backwater town, pick this book up. It’s going to echo in your brain like a quantum tunnel.