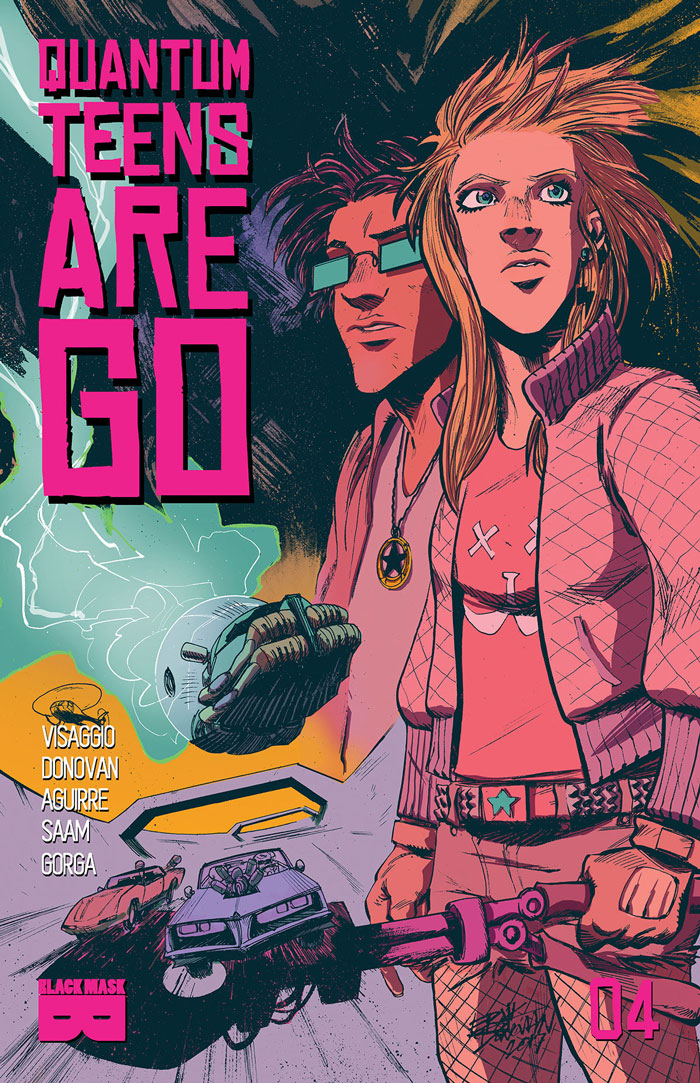 How deep do Zero’s secrets run? As Sumesh, Natalie, and Wayne dive into the hidden base where Zero’s mysteries lie, what will the two uncover about her? What will they uncover about Sumesh? Find out in this mind-blowing final issue!

Visaggio’s world of space-time travel is wonderfully done. While I’d say some of the surprise reveals aren’t as surprising as they could have been, there are some curve balls in there that work well. I like that the future is not a unified force, but many broken factions under one flag, and that the main authorities from that distant place aren’t necessarily the ones to blame for certain travesties that take place, but a more extremist offshoot. I like that complication.

The art Donovan creates is captivating. The intricate futuristic mechanisms that clutter Zero’s secret base are all intriguing and make me wonder what a woman with her motives is doing, creating such sophisticated technology in the time period she’s in. The evolution of Zero’s arm during a particularly high stakes scene is wonderful to look at as well. Watching a prosthetic turn from an arm into some Mega Man arm blaster is pretty neat.

It’s a very minor detail, but I love the scraping blackness that seeps into the backgrounds throughout the comic. It’s this raw, edgy looking chaos that adds to the atmosphere of the comic and I feel makes some panels. I especially love the effect in a scene towards the end of the comic where a certain machine is accidentally activated. The room lights up in a blazing madness of yellow as two people become shadows. Scratchy black, otherworldly shadows that disappear, leaving a gaping hole in their wake. Using that effect in the panel creates more impact within that scene.

Aguirre’s coloring is fantastic. The shadowing for whenever billowing smoke is in a panel always looks nice. The paradise pink that shades certain panels and encompasses the background of others gives this comic part of its uniqueness. Not a lot of people think of using pink for comics that aren’t gender normatively “girly” and its nice to see it as a well used color in this comic.

Quantum Teens Are Go! is a comic that people should read. While I believe the comic would have done better pacing-wise with another issue or two, the comic leaves room for a sequel series, and I hope the writers are able to continue. I love Natalie and Sumesh as characters and it would be magical seeing them travel the universe together.