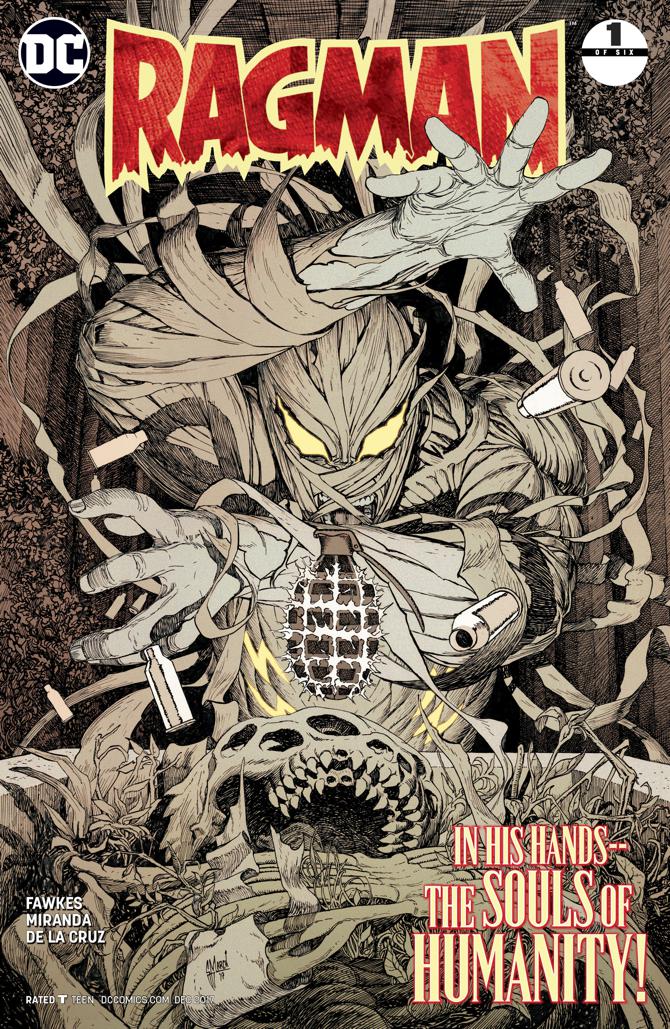 Ragman is the star of this new 6-Issue mini-series from DC, but he is not a new character. Ragman has been around in comics since 1976, when he was created by Robert Kanhiger and Joe Kubert. Ragman has undergone several iterations of his own origin story, including a recent appearance in Arrow that introduced him as the victim of a nuclear attack. This introductory issue to the new Ragman series pulls pieces from Ragman’s roots, while integrating a new origin and backstory that brings Ragman into modern-day Gotham City.

In Ragman #1, we meet Rory, before the Rags. Old fans of Ragman will see familiar nods to the character, like his father’s shop, Rags N’ Tatters. Nods to the original character are intertwined with a new narrative centered around Rory’s trauma and experience while in the military, serving in Israel. The story handles the themes of survivor’s guilt and PTSD well, while also developing Rory into Ragman. The real themes of trauma are overlaid with themes of horror, mystery and intrigue as Rory realizes there are strange shadows following him- shadows of his past, and shadows of dangerous monsters with bright glowing eyes.

The art is well-suited to this story and theme. The visions of Rory’s military past are dynamic and realistic, while still integrating well with ancient ruins, tombs, and magic. The darker color palette lends itself well to both the themes of depression, struggle, and trauma and the slowly developing horror elements. Depicting a person fighting with a humanoid pile of rags in a convincing, threatening way is a difficult task, but this comics makes Ragman seem like a real, building threat.

As a first issue, this comic seems a little sparse. Though it is a new take on the character, the action does not pick up until the end and it reads as more of a formulaic origin story intro comic. The last few pages of heavier action are somewhat difficult to follow, because they focus on present-day and flashback panels, and the jumpiness makes the intent less clear.

However, the exposition is enough to introduce the character to unfamiliar fans, and the nods to the previous iterations of Ragman are a nice treat for readers returning to the character once again. As the mini-series continues, it should pick up its pacing a bit and delve more into the true nature of Ragman, and the direction they take will be telling for the character. We see a glimpse of a turning point in the action at the cliffhanger ending, so hopefully the next issue reveals what type of powers, abilities, and new origin this version of Ragman will have.

Ragman is a classic character in the DC Universe, and this new series is off to an excellent start. It will be interesting to see how, or if, Ragman factors into the current DC comics and integrates into a more modern Gotham City. With 5 more issues to go, the stellar team on this book should be able to turn out an action-packed mini-series that shines the spotlight on an underrated character. Now all that remains is to see if Ragman will lean into heroics or horror, but it is sure to be an exciting ride either way.