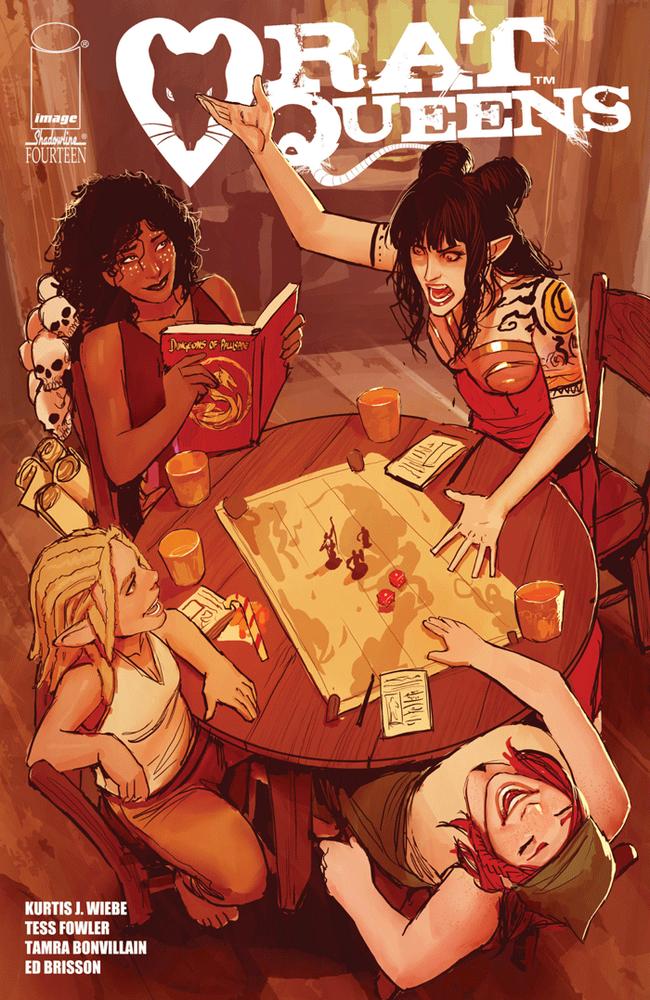 Dragons, deities, and daddies, oh my!

Betty and Violet take on a dragon while Delilah reminisces with her brother and Hannah somewhat begrudgingly reconnects with an old friend. Dee reveals some unsettling truths about the nature of her magic, while Hannah relives the tragedy of her past. As Betty and Violet rejoice over new treasures, Dee and Hannah set up a heart-to-heart that may not be full of the warm fuzzies as they move forward.

Rat Queens #14 reminded me how much I love arcane stories and their limitless possibilities. Magical worldbuilding is entertaining, enthralling, and requires a very unique kind of imagination. In particular, Delilah’s interaction with her brother is full of that mystical depth I look for. Rat Queens, as a series, has a great mix of snark, magic, and relationships, never letting go of one of these elements for another. To see Delilah delve into the sinister roots of her own magic, and to get glimpses of Hannah’s inner inferno, is wonderful to say the least.

Kurtis J. Wiebe does a great job keeping up with the three parallel threads of this issue. While two of them come together, there are hints that the third will soon intertwine with them. This issue was a great mix of history, worldbuilding, and adventure, all of which seem to have some bearing on the current story. Rat Queens #14 is definitely a long haul kind of issue, and Wiebe is setting up the Queens’ future rather nicely. For Dee to confront Hannah by the end of the issue means that we may be in for some rather major revelations.

Tess Fowler and Tamra Bonvillain work well together as a fantasy art duo. The magic is vivid, the scenes diverse and perfectly matching the atmosphere of the story. Fowler’s work on each of the characters infuses life into each of the panels, while Bonvillain’s colors add an extra spark to the art and the story. There is a great mix of realism and individual style that lends itself to the Rat Queens’ setting and helps to vivify the story on the whole.

This issue of Rat Queens has some great parallels to institutional oppression. Hannah’s issues with the council, in particular her mother’s fate, are major throwbacks to the Civil Rights era in America and how people were marked for death by bucking the system. One of this series’ strengths is its ability to have women in multiple ways of being and to be frank about how they move about the world. The very first time I read Rat Queens let me know that this was a series to be reckoned with in between its more lighthearted or adventurous elements.

I highly recommend this series and this issue. From the beginning, Rat Queens has been a great ride and I like seeing issues like #14 which promise some major stories in the future. I look forward to seeing how things change between each of the Queens and what magical misadventures they find themselves in. For something new, refreshing, and irreverent, look no further than Rat Queens #14.