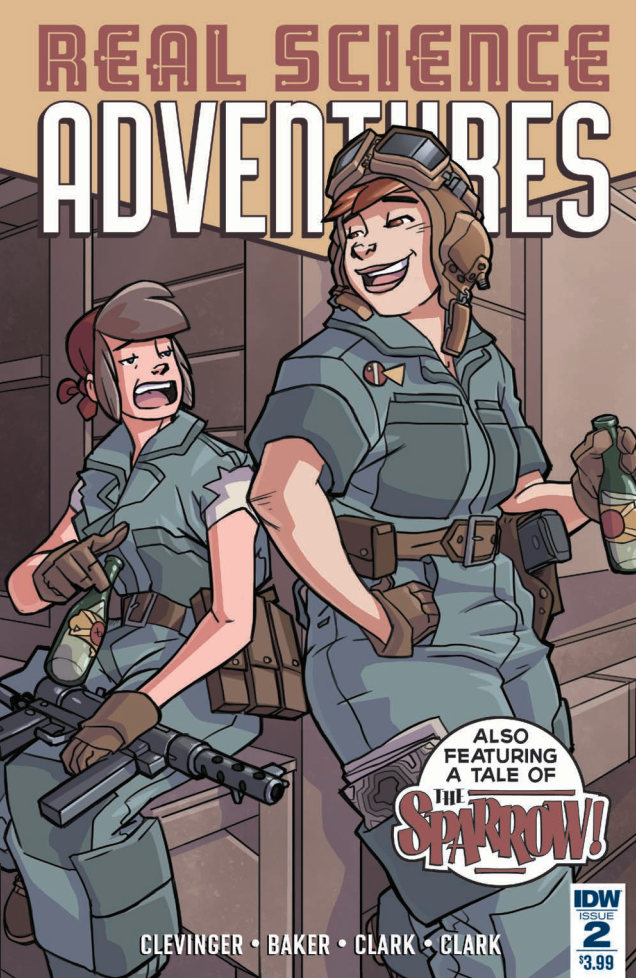 Out on a treacherous death wish mission for supplies, the Flying She-Devils enter the belly of the beast, stealing from the unhinged Mad Jack and his marauding crew in this exciting issue of Real Science Adventures!

Clevinger has captured the essence of a World War II comic in Real Science Adventures while polishing it in order to adapt to modern nuances. Subverted is the trope of the White Savior when the she-devils and the Tongan prisoners work together to escape from the dastardly clutches of Mad Jack and his crew. Here, women are ushered to the forefront, saving themselves, having their own adventures in both the pacific and the depths of Europe. It’s nice to see.

Baker’s art has an almost sketch feel to it. It’s a bit rough, and detail can be sparse at times, but I believe that this style works with the overall feeling of the comic. Whenever detail is truly needed, it stands out, and I like those dashes of intricacy. It makes the face drawn on the sunderland or the emphasis on Mad Jack’s face feel all the more important.

Wook Jin Clark’s art on The Sparrow, compared to Baker’s, is a more clean and polished style, which also works better for his comic. While The Flying She-Devils needs that roughness due to the swagger of the characters and the wildness of their uncharted locations, The Sparrow needs something polished and proper to compliment the Britishness of the main character and the malicious efficiency of the Nazis she fights. They’re refreshing to see back to back as styles.

Anthony Clark’s coloring works for both of the comics. The blue palette for nighttime in both The Flying She-Devils and The Sparrow is always a nice touch. I also find the shading that comes through from the fire in the explosion in The Flying She-Devils works well with the feelings of anger and frustration Mad Jack displays during those scenes.

I like the scenarios that the characters in both The Flying She-Devils and The Sparrow are placed in. I find the little summaries of information for both of the comics to be fun to read. It’s a decent comic overall.