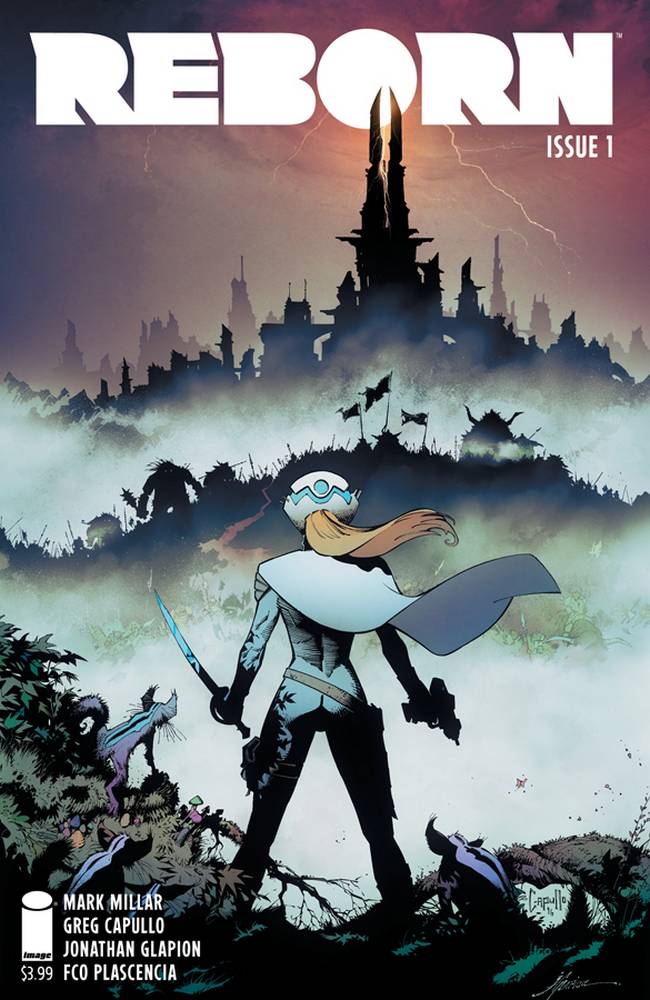 There’s a force to be reckoned with and it’s Mark Millar! Millar has been absolutely nailing creator-owned properties for the last half year (on top of an impressive catalog before that), with beautiful titles like Huck and Chrononauts. Reborn is Millar’s latest Millarworld series, with art by none other than Greg Capullo, fresh off an incredible run on Batman. They are joined by Jonathan Glapion’s solid inks, FCO Plascencia’s breathtaking colors, and Nate Piekos’ always perfect letters and design. So, do you need another Millarworld title in your life?

Reborn #1 takes the idea of the afterlife to a whole new level. It’s not about heaven or hell, or black nothingness when the power shuts down…in Reborn, when you die, you wake up in a younger, more able version of yourself. But, it’s not that simple, because your new body just happens to be dropped into the middle of a warzone with fantastical creatures and armies of evil surrounding you. This first issue follows Bonnie Black, an elderly woman one step away from passing on, she thinks, to absolutely nothing. But, when she closes her eyes one last time, she opens them in a strange world with familiar faces and the promise of adventure on the horizon.

Reborn has all the best elements of sci-fi and fantasy. There’s a wondrous story being told here, but it’s done with beauty and grace and, well, dragons. Millar has concocted yet another intriguing story with a lot of thought-provoking ideas, executed in an edge-of-your seat manner. Millar not only conceives of some of the best plots in comics today, but he writes them so smoothly, stepping into the shoes of a diverse range of characters and realities. His dialogue is crisp, the narration moving the story along in a manner that doesn’t over-encumber the pages. Millar taps into the fears of an ordinary person and deals with them in an extraordinary way that’s exciting and nerve-wracking all at once.

The art here is out of this world. It’s so much fun to see Capullo flex his (very large) muscles in a different genre, with diverse landscapes and characters after such a fantastic run on Batman. It’s hard to imagine him drawing anything else, but here, Capullo has captured every corner of that imagination and taken it to places far and wide. His character art is consistent and easy to follow, and the settings of each panel are filled with detail. The acting here is wonderful, capturing complex emotions and laying them bare for the reader. Panel layouts are dynamic and keep your attention moving forward at every page turn. Glapion’s inks complement Capullo’s pencils perfectly, providing delicate facial lines and deep blacks for shadowing without losing the intricate detail of Capullo’s work. Plascencia’s colors are absolutely gorgeous utilizing brights for energetic features and dark natural palettes for the terrifying landscapes. As always, Piekos letters kinetically, drawing the eye around the panels seamlessly and allowing the art to breathe as necessary. Nothing feels muddied or hard to read, and the creative team flows together well.

Reborn is a must-buy. The first issue was masterfully executed and the opening issue hints at a rollercoaster of story yet to come. Millar and Capullo have created an exciting and thoughtful book that I can’t wait to keep reading.