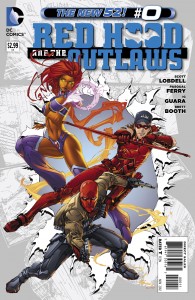 It’s easy to spend a lot of time and energy focusing on the characters who got the short end of the stick after a major continuity relaunch — as a Bat-fan, I could certainly name a couple, although, frankly, even I’m tired of the discussion at this point — but in Red Hood and the Outlaws, the long-suffering, sometimes dead second occupant of the domino mask, hot pants, and pixie boots seems to finally be coming into his own.

The DC universe has been trying to figure out what to do with Jason Todd since Jeph Loeb’s Hush storyline, and before Flashpoint, he was mostly been placed on the villain side of the villain-antihero-hero spectrum.1 While opinions can vary over whether the poignancy of Todd’s sense of betrayal in Under the Hood2 is earned or overinflated, or if his misguided assumption of the Bat-mantle in Tony Daniel’s Battle for the Cowl stands with Jean-Paul Valley as the worst Batman ever, Jason has mostly served as an object lesson of a Robin gone wrong, rather than as a character in his own right.

This is in stark contrast to the way that Todd’s canny, sardonic narration drives Red Hood and the Outlaws #0. (Which could really have been titled Red Hood #0. Starfire and Arsenal are only on the cover.) The New 52’s Jason Todd is a smart, sarcastic, and convincing survivor, and Scott Lobdell has finally given him a voice shaped but not determined by the obstacles he’s had to overcome (as well as the pain he still carries).

With Jason Todd finally making sense as a hero shaped by crime and violence beyond anyone else in the Bat-family, and DC’s Zero Month quickly becoming the month of the Robins3, it’s a bit surprising that the one place that Red Hood #0 falls flat is when Jason actually becomes Robin. While Jason Todd’s character and personality are finally firing on all cylinders, maybe for the first time ever, Batman’s decision to take Jason into his home and train him as his partner feels sort of random.4 While Todd’s background and character might make him unable to step out of his shell of emotional understatement, the story still needs to find some way to show exactly what convinced Batman to take Todd on as a partner. Maybe Jason himself doesn’t know what that was, but in a issue that does such a good job in presenting the contrast between what Jason says and what things really looked like, Red Hood #0 should have shown us at least once what Bruce Wayne saw in Jason, even if Todd can’t quite imagine it himself.

1. It’s worth noting that Todd has actually been rebooted as a character at least once even before his death and rebirth. Prior to Crisis on Infinite Earths, Jason Todd was an orphaned son of circus acrobats, much like Dick Grayson. Post-Crisis, Todd becomes a young petty criminal who meets Batman when he attempts to steal the Batmobile’s tires. He’s a darker, edgier Robin, but for some reason, he’s still stuck in pixie boots.

2. Happily retitled Under the Red Hood for the animated adaptation. Seriously, every time I see Batman: Under the Hood on a bookshelf, I’m convinced for a half second that it’s a compendium about the Batmobile.

4. The backup story’s revelation that Jason Todd’s becoming a Robin may have been manipulated rather than motivated is clever, but not entirely convincing. The New 52’s Bruce Wayne may not be as infallible as he was often previously written, but at the moment, it seems that Jason Todd became Robin just because there happened to be a vacancy. Given that current continuity is that Dick Grayson wasn’t Robin very long, and may have never really been comfortable in the role, an implication that Batman somehow felt an overwhelming need to take on a partner, any partner, is unsatisfying.