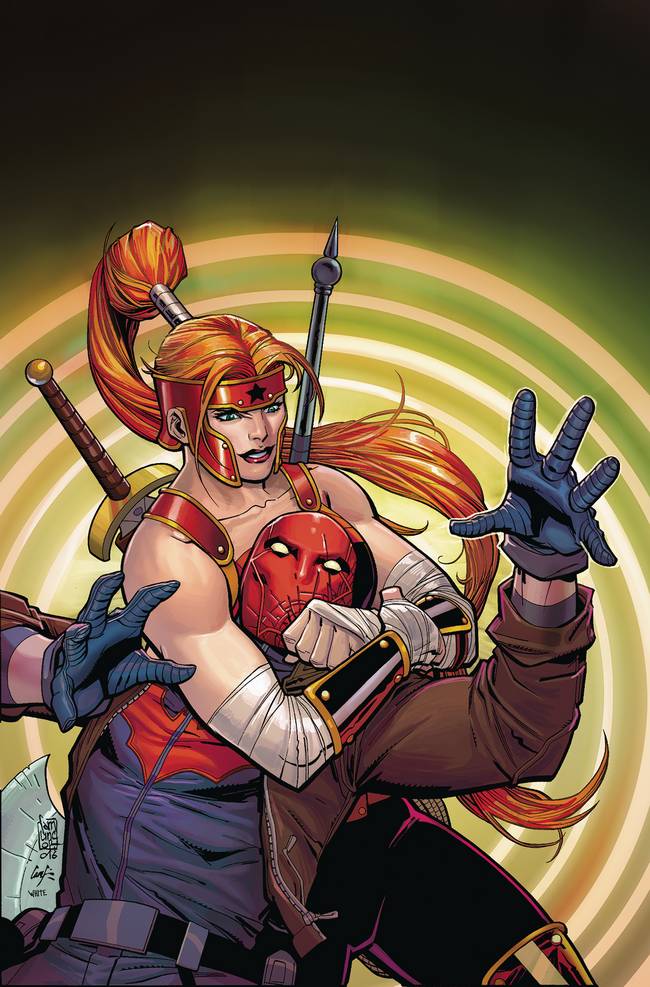 Jason Todd meets the Amazon Artemis, making her Rebirth debut. Will he survive the experience?

Red Hood runs into Artemis as he tries to hijack a train at the behest of Black Mask, whose gang he is attempting to infiltrate. A fight ensues, which concludes with Red Hood and Artemis tentatively joining forces to pursue the train’s dangerous cargo.

This comic is a single extended action scene, and I loved every page and panel of it. There’s a fantastic energy that drives it from start to finish. Splash pages abound, with dynamic panel layouts that pull you from the start to the finish with barely a chance to catch your breath. It’s a master class in staging engaging action in sequential art.

What holds this issue back is that it’s a world-class execution of a fairly cliché plot beat. Two protagonists, both anti-heroes, meet, have a misunderstanding, fight, come to realize the benefit of an alliance, then team up. They banter, and it’s decently clever but nothing you’ll remember after putting the book down. Artemis has a giant axe inhabited by an Egyptian goddess, which is new for the character, but her personality is standard-casting Strong Female Character, Bad-Ass Bitch variant.

What really makes this issue sing is Dexter Soy’s art. Soy has a fantastic sense of anatomy and dynamic posing that imbues the art with vitality. More that that, he uses blur strategically to create a sense of motion and impact, as when Artemis’s fist slams into Red Hood’s face or her axe is planted into the ground. The style feels evocative of Cowboy Bebop, with carefully staged fighting enhanced by a fluid sense of movement.

Special attention has to be paid to Veronica Gandini, whose muted colors give this book an almost film noir feel. It’s especially notable in flashback where, as in previous issues, everything is shades of grey except for the color red. Here the style carries over to Artemis’s flashbacks, and serves to draw a parallel between the Amazon and Jason Todd. Gandini’s subtle shading perfectly complements Soy’s pencils to create one of the more distinct looks on the shelves today.

The way Soy poses Artemis is also worthy of note. Artemis has, since her inception, been one of the prime exemplars of the Bad Girl Art of the 1990s, with odd proportions and snapped-spine anatomy. What’s so deeply refreshing about this issue’s art is that, despite her comically large axe, she doesn’t fall victim to any of the old traps. There’s nary a boobs-and-butt pose to be found in the whole issue, when she cocks her hip it’s to balance the weight of her giant axe blade, and she’s depicted throughout in powerful poses that actually make sense for the fighting that she’s doing. Artemis looks and feels like she’s actually fighting, rather than making sexy poses while a fight happens around her.

Red Hood and the Outlaws #2 is an exciting, if a tad cliché, extended fight scene that showcases some of the best sequential art on the market today.