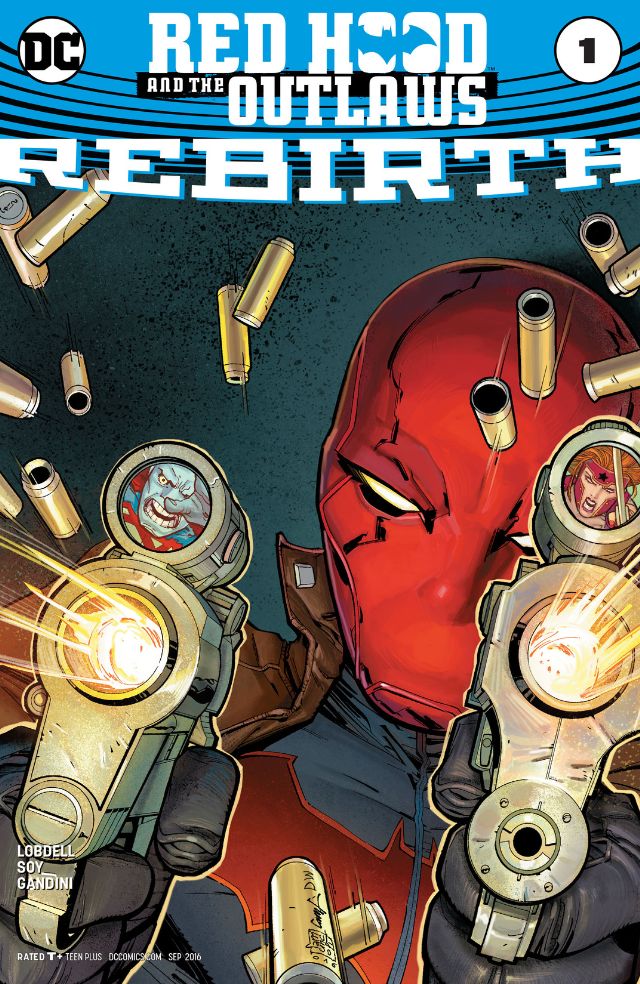 Red Hood teams up with Artemis of the Amazons and Bizarro to infiltrate the Gotham City underworld, forming a new “Dark Trinity!”

Red Hood and the Outlaws: Rebirth is, by a wide margin, the best Rebirth special I have read. It covers the same ground as other Rebirth specials (half recapping the characters’ histories, half setting up the next story) but does so in a way that’s actually satisfying as a stand-alone comic. Moreover, it’s superbly executed on both an art and storytelling level.

The story shifts back and forth between the past and the present, with Jason Todd narrating his first meeting with Batman, his days of training and fighting alongside Bruce, and, eventually, his fatal encounter with the Joker. The creators skillfully interweave this with Jason’s present, where he’s apparently attempting to assassinate Gotham City’s mayor and fighting off an attempt by Batman to stop him.

Lobdell and Soy seamlessly transition back and forth, maintaining a unified narrative line that draws us through the two stories without ever feeling jaring. We move from Jason’s unsuccessful first attempt to fight Batman as a teen to his far more successful ambush of the caped crusader in the present. We shift from an off-hand mention of the Joker in a bar to Jason’s deadly prior encounter with the villain. The reader is compelled forward, panel-by-panel and page-by-page, and is left disappointed when the issue ends because they want to keep following this thread.

Rather than the perfunctory recitation of important plot points that has been the hallmark of a lot of Rebirth specials, Red Hood and the Outlaws: Rebirth retells Jason Todd’s life story in a compelling and thematically resonant way. The reader finishes, not only satisfied that they’ve read a well-told prefatory chapter to a longer story, but prepared for the larger themes the book will grapple with going forward.

And the art! Dexter Soy’s art is sharp and detailed, with excellent posing. He depicts complicated action scenes with effortless grace, so the reader never has to stop to wonder how the action moved from one panel to the next. And he does it while giving us striking visuals, like a caped Batman towering over Red Hood, his cape stretching back and around to engulf Jason like a pair of bat wings.

But perhaps the most striking element of the art is Veronica Gandini’s colors. She keeps the art in the past muted, faded, dreamlike, but for Jason’s red hoodie. In the present the art gets more colorful, even as Jason’s red outfit pops more than anything else. It’s a striking example of how effective use of color can set the mood for a comic and elevate its impact on the reader.

One thing worth noting: This issue is about Jason Todd, not the Outlaws. While the solicitation text and the cover seem to promise appearances by Artemis and Bizarro, neither are anywhere to be found. I think the issue is perfectly effective on its own and wouldn’t wish for them to be crammed in unnaturally, but if you’re looking for those two characters you’ll be disappointed.

That also means that it’s still unknown how well the creative team will render those characters and their interpersonal interactions, which was somewhat of a sticking point in some of Lobdell’s prior works with Jason Todd.