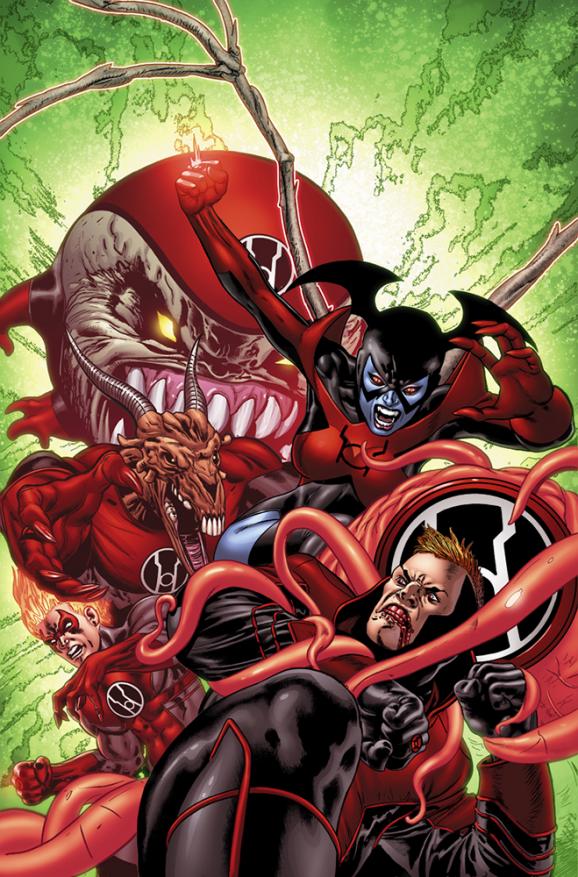 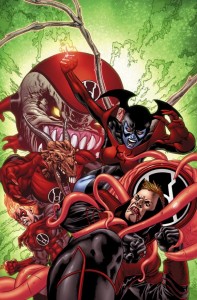 This latest issue raises a very interesting question: Just who or what is in control of the Red Lanterns?

When we last left Guy Gardner, in issue #21, he had taken down the most powerful Red Lantern ever known in a powerful and swift move. With the red ring now on his hand, the blood-expulsion and giving over to rage has begun, leaving Gardner little more than a dangerous, mindless weapon that the other lanterns could point in a particular direction, or take him out once and for all. The debate that then ensues over Gardner’s fate, and just whom is in control, allows author Charles Soule and artist Alessandro Vitti to create a rather humorous series of panels that lead to great tension-filled confrontation. The exchange serves a dual purpose, by not only giving the characters personality, but also introducing New 52 rules of how the Red Lanterns function to potentially new readers who picked up with issue #21.

The outcome of this well-crafted exposition leads to another debate of whom is in control, for the second half of the story. However, this time things become more philosophical, as even the reader cannot say for sure if the red ring is controlling Gardner or if Gardner, successfully fulfilling his goal of infiltrating the Red Lanterns, is the one controlling them.

Overall, each of the characters are well-crafted throughout most of the book. However, there are a few panels where the formation of Bleez’s face felt rushed, despite being centerstage. Also, Dex-Starr is showing powers he has previously never shown before which lays out a mystery that hopefully Soule addresses in future issues.

No matter what, Soule lays out the argument that righteously targeted rage could be of some benefit to the universe — at a terrible price.