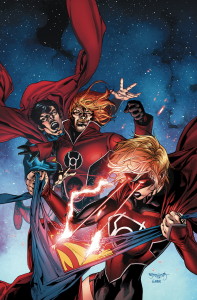 The Red Daughter of Krypton crossover continues in an issue that seems ideally set up to cure Kara of her Red Lantern status. Instead, readers are provided with a cheeky family reunion that seems to solidify Supergirl’s place among the Corps.

Throughout the dialogue, between Superman and Kara, Soule does an excellent job of explaining how she was a perfect candidate to receive the ring. This answers a lot of reader questions I’ve seen online, for those who have not been following Supergirl’s New 52 storyline. This is not the same helpful and loving teenage cousin. Instead this newest iteration has had to deal with the confusing ramifications of losing her home and family in a much more logical, yet destructive, fashion. You know, the way an actual teenager would react — not rationally. Soule’s take livens up her story. Finally with the Red Lanterns, it’s as if Kara can relax like she never has been able to before.

Vitti’s art continues to add to the haggard nature and lifestyle of the Reds. Guy Gardner has a worn and wrinkled look showing stress and hard living. Superman is shown as rather youthful but very square jawed, with a much rounder face and much more welcoming than he’s been seen in other books. Layout of panels and character moments shine with changes in perspective or focusing on the characters during a punchline.

This isn’t a nail biting, edge of your seat installment. Instead, it’s a nice change of pace that continues to lay a strong foundation into the changing character of the Red Lanterns. It also shows how well Soule and Vitti can sell humor and compassion.

Of course, the final panel reminds us that a fight is just around the corner.