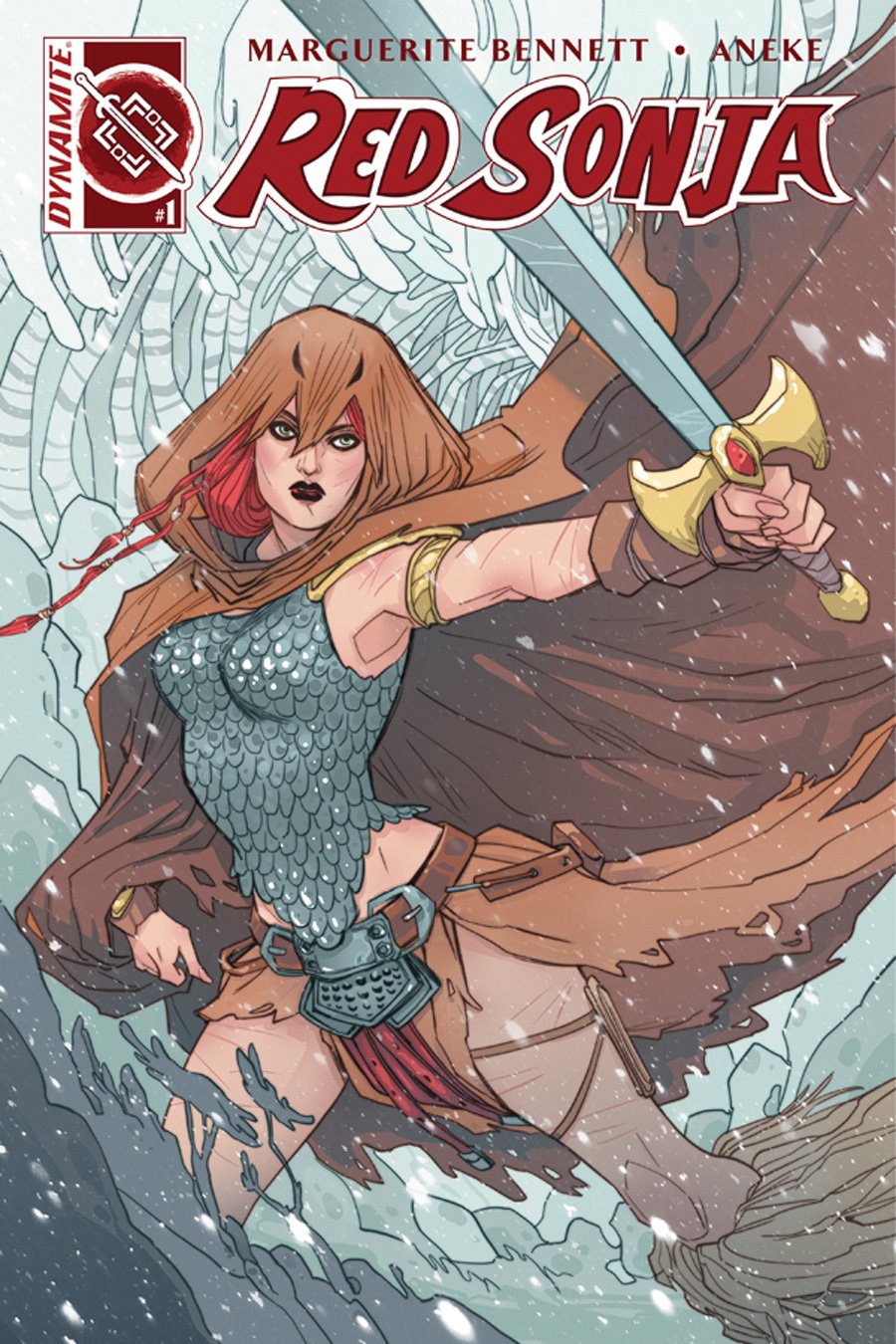 Following Gail Simone’s transformative run that took Sonja all the way back to her origin could be one of the toughest acts in comics to follow in years, but Marguerite Bennett and Aneke appear loose and confident in their debut. In a sense, the opening issue of the volume reads like a whimsical inversion of the final issue of Simone’s run that saw Sonja come to grips with the fact that she didn’t have to be the She-Devil, that she was released from it.

At the opening of the issue, Sonja returns home to Hyrkania where the king is barely clinging to life. He begs her to consider taking the throne when he dies, after the latest folk remedy fails him. Sonja considers it briefly, but after the daydream of the bacchanalia she foresees her rule devolving into, she declines his offer. She will continue to protect the realm as the She-Devil rather than its queen.

A year after the king’s death finds Sonja returning home once again — after having killed monsters and fought evil tyrants abroad — this time feeling more certain than ever that her place in the world is to be the She-Devil. But much to her chagrin, it appears that Hyrkania doesn’t actually need a She-Devil anymore. At first, the improvements seem superficial, like universal education and a bustling market with foreign traders. But the further she goes trying to find adventure, the more maddeningly progressive the kingdom becomes. Thieves are quickly apprehended by the military, monsters are rooted out of the forest and dealt with promptly, and no one in the taverns is looking for a fight.

Some of the seemingly utopian aspects of the new Hyrkania become truly comical from an explanation of the military’s benefits, including options for remittances to soldiers’ families and reading lessons for all recruits to a town cryer declaring the outlawing of gentrification. The end result is Sonja dying of boredom as she finds herself in a world too peaceful to need her. It’s reminiscent, in the best way, of some of the early Adventure Time episodes that explore the fact that Finn and Jake’s only real utility to the world around them is violence.

Things do finally take a turn towards the exciting as she’s roused by a family attempting to flee the freshly utopian Hyrkania. As their pursuers catch up, Sonja learns that all isn’t what it seems as it’s revealed that the family is fleeing forced conscription from the army that seemed so friendly and progressive a couple pages ago. She’s ironically relieved by the revelation that the changes are too good to be true and launches into battle, declaring that if she can’t be the She-Devil of Hyrkania, she’ll be the Huntress Red Sonja.

One of the most interesting aspects of the debut issue is that it succeeds very well without drawing on the aspects of Bennett’s work on 1602 Witch Hunter Angela, Bombshells, and Beauties — projects that made the prospect of her doing Red Sonja so inviting. There haven’t been any songs or the kind of sweeping, lyrical narration that she’s distinguished herself for yet, but this is, of course, also an issue entirely about Red Sonja not being able to do what she does best! The bar for entry is as low as it gets, there has absolutely never been a better moment to jump into the character than now.

Sonja remains in good hands with Dynamite regular Aneke joining Bennett. Her style is pretty safe and well within the company wheelhouse, but she keeps the focus on drawing Sonja’s personality out and keeping the action uncluttered. The one area of the art I would definitely like to see more chances taken with in future are the colors. Jorge Sutil provides clean flats with some basic highlights and shadows, but there’s plenty of room within Aneke’s lines to be bold and take a more active hand in steering the story. It comes out briefly as Sonja drifts off to sleep by the warm glow of a camp fire, dreaming of the lovers she’d consider taking as consorts had she decided to become queen. 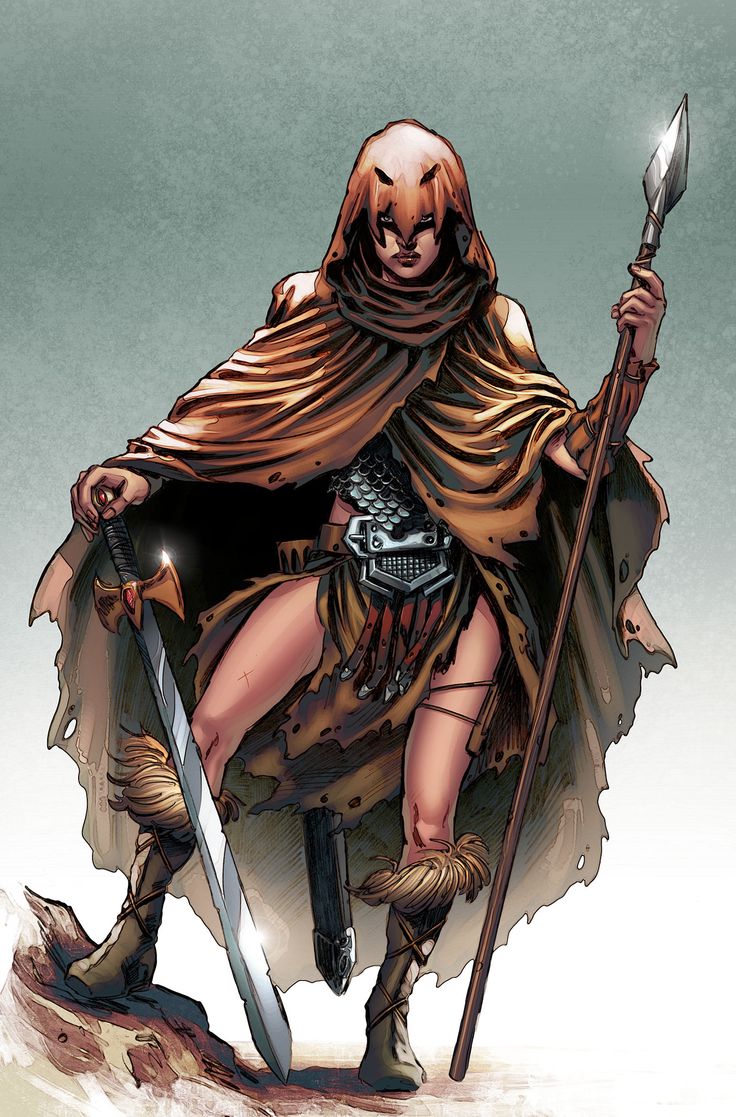 As the first of the three titles (along with Vampirella and Deja Thoris) to come out of Gail Simone’s fresh treatments and new costumes from Nicola Scott, it certainly points to blue skies ahead. Red Sonja is a pretty obvious success that proves you can put sexy heroines in the hands of women without compromising them in the slightest, which can’t really be a major surprise considering Bennett’s success at Marvel with a certain space bikini wearing angry redhead. What this debut also proves, to me anyway, is that Sonja was ultimately the least in need of a costume revamp. The general idea of a chainmail bikini, for a character who is effectively positioned as the female equivalent of Conan, who runs around in little more than a loincloth and boots, isn’t one I’ve ever had much of a problem with.

Marguerite Sauvage, who provides the cover, and Aneke make it work for them, but there’s no doubt they could have made the old bikini look work just fine too. The thing about the execution of the bikini was never that it left her midriff bare, it’s that there was little to no willing editorial oversight to clamp down on how much coverage there ought to be. Over time and across artists, the triangle cut top and loincloth have shrunk to miniscule proportions, barely covering her nipples and butt in some cases. With Sonja, all that was ever needed was a careful attention to detail to keep the outfit within a reasonable range.

On the cover, Sauvage delivers a striking Sonja that strikes a balance between a curvy silhouette and sharper, more angular arm muscles and scarring. On the interiors, Aneke has little trouble navigating how to frame Sonja’s body. Even in the sexier scenes, she keeps the focus on the emotional intimacy between partners and away from voyeurism. It’s the kind of talent and restraint that isn’t particularly impacted by a couple inches of bare skin here and there. The key lesson, if there is one here, is that cheaply exploitative takes can be made on just about any costume. The wiser route than trying to design to deflect the more prurient aspects of the male gaze is to hire artists who have the talent and maturity to execute a character’s design and posing honestly. It’s slightly moot here since between hiring Scott to execute the redesign, and then putting Sauvage and Aneke on the book, Dynamite has both covered.

It’s anyone’s guess where the series will go next as Sonja confronts the new regime that’s taken over her homeland, but this is a really obvious buy. Putting women, and these ones in particular, in control of Red Sonja is the best thing that’s happened to the character since Wendy Pini first cosplayed her.