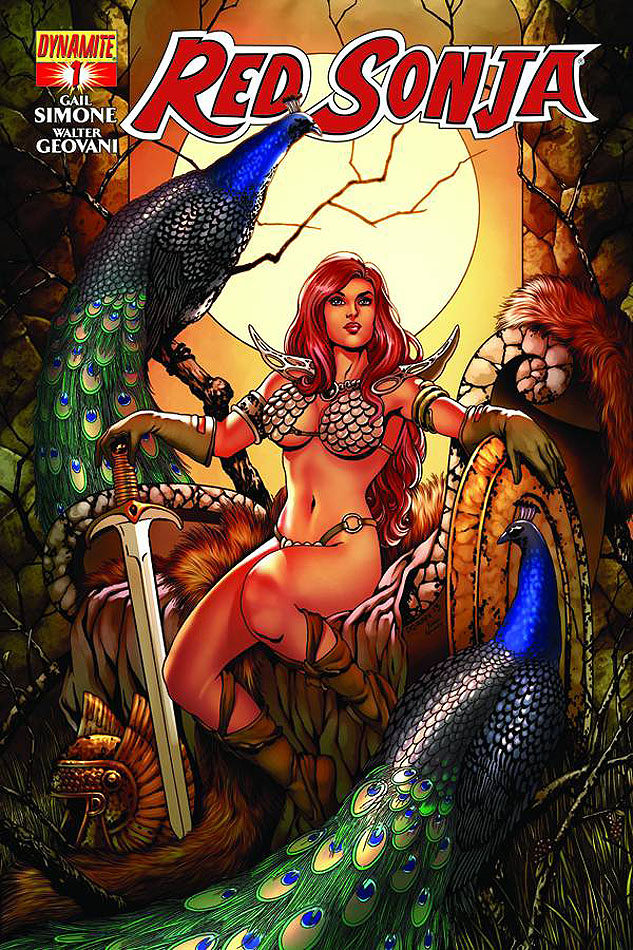 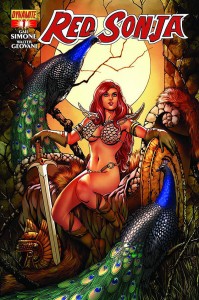 You can relax, everyone: Red Sonja #1 is awesome. Not only is it awesome, it’s a definite opportunity for readers who are fans of Gail Simone’s work to step outside their normal comfort zones and try something new. This book is a fun, action-packed, simultaneously violent and humorous adventure with swords, bandits, kings, plagues, battles, a training montage (I LOVE montages!) and of course, a chainmail bikini.

Full disclosure: I’m brand new to the character, and not really a fan of the genre. Simone is the reason I read the book, that and the gorgeous covers. All I knew of Red Sonja going in was that: 1) She knows Conan the Barbarian; and 2.) she is cosplayed by braver women than I. I was hooked by the experiment: amazing writer plus amazing artists (all of whom happen to be of the lady persuasion) team up to redefine the image of a bikini-clad warrior babe. I wasn’t at all sure what to expect. I certainly didn’t expect so much in one issue. To keep it as spoiler-free as possible: some time back, Red Sonja was shown mercy and her life saved; years later a threat arises and Sonja must come to the aid of the people who once came to hers. Along the way, we see Sonja drunk, kicking butt, complaining about wearing fancy dresses, kicking more butt, and serving up some sweet battle cries. While the last page reveal of our antagonist isn’t the most shocking thing in the world, it’s no less exciting. It probably helps that the antagonist bears a resemblance to one of my current favorite characters in comics right now. I want to know more, about everyone and everything.

Best of all, this book is a return to funny for Simone. Batgirl and The Movement are both good books, but the tone is considerably darker than, say, Secret Six or Birds of Prey. Red Sonja has some genuine belly laughs (I hope Sonja receives at least one new honorific nickname per issue). It’s also really cool for me, as someone who has only read her DC work, to see her playing in a new sandbox. I no longer have the context of a universe I know to help me, and yet I come out of the issue knowing everything I need to know about Sonja: she’s a hard-drinking, no-BS brawler, she takes loyalty seriously, she has empathy and honor, but she’s not obsessed with rituals or ceremonies. She’s got a unique personal code – a must for any good action hero – and she’s even relatable. I can get behind a girl who drools in her sleep and stinks like a barn after several nights in the woods.

The art is well suited to the story – very straightforward and minimal on the cheesecake. I’m not familiar with Walter Geovani, but I have zero complaints. The lack of pin-up poses and the heroic spreads helped me get past the metal bikini and focus on the story. Honestly, between Simone’s words and Geovani’s art, I can buy the argument that Sonja OWNS that ridiculous thing. She makes it hers and will stab you if you have any sass about it. The panel layouts are fun and dynamic as well, and a lot of detail goes into the backgrounds, giving the world a lot of character.

If you like guys getting stabbed and sassy red heads, buy this book. If you like adventure, scary armies and fashionable horse armor, buy this book. There’s something for everyone here, and in light of Monday’s announcement, this title is only just the start.