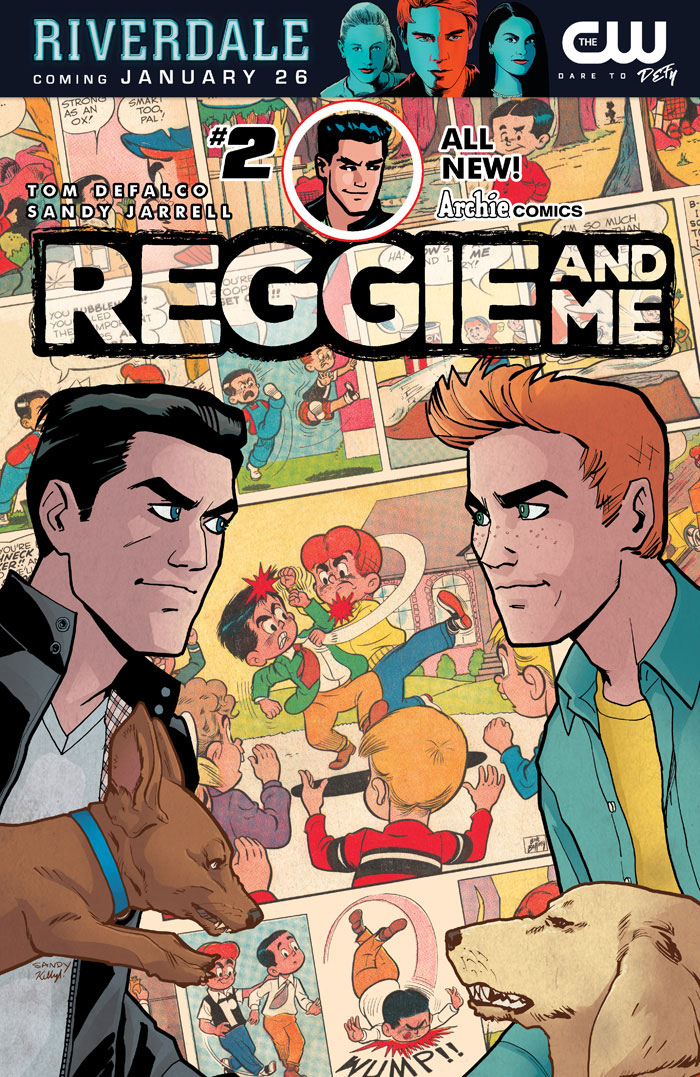 When Reggie sees an opportunity to get what he wants while being able to prank a few chumps, you know he’s going to take it. Reggie begins his scheming and more in this issue of Reggie and Me.

The writing in all the Archie comics I’ve been reading for a few years now has been very solid, and Reggie and Me is no different. DeFalco does a spectacular job for Reggie.

I love that the story is told from the perspective of Reggie’s adopted dachshund, Vader. There’s something humanizing when looking at Reggie from Vader’s perspective. I also have a soft spot for stories told about someone who’s not exactly deemed the “nice one”.

Jarrell’s art style feels perfect for this comic. There’s a good amount of realism in Vader while still maintaining a cartoonish charm. Every background character is unique. The goofy “Zero Violence Tolerance” sign is ever present in many panels, like a giant Chekov’s gun for what’s to come in later issues of this arc. Fitzpatrick’s coloring is superb as well. Her choices are great throughout.

The flashbacks probably stuck to me the most because it sheds light on a dynamic between Reggie and Betty that I’ve never really noticed before. Towards the end of a particular flashback, there’s a reveal of something…distressing.

A choice that Betty made in the past that definitely negatively impacted Reggie due to an event that no one can really claim fault to. It’s impactful when you see the tears in young Reggie’s eyes as he runs away from her and her higher than thou attitude that brushed him off the instant they began to hang out. Vader’s narration rings true there.

“I believe Reggie really wanted to be friends with the other kids. But they never gave him a chance!”

It’s captivating. To see this beginning of Reggie’s distancing from people, especially since it’s due to a pretty traumatic event. It’s a great character building flashback. Seeing him eat a sandwich alone with tears falling down his cheeks, his parents neglecting him yet again, his friends viewing him as what’s wrong. It makes me feel for Reggie.