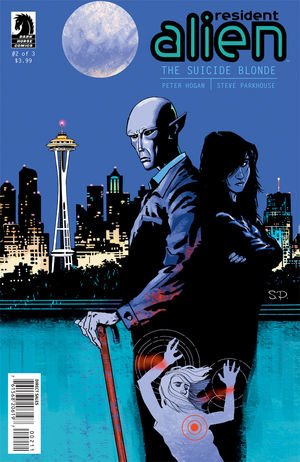 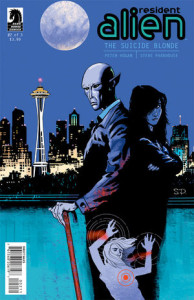 The X-Files meet Murder She Wrote in the second issue of the second volume of Resident Alien by Hogan and Parkhouse, and all of the intrigue and spark of the first series is still here. Hogan writes a solid mystery that has the feel of a prime time TV mystery which makes this issue very easy to pick up and feel comfortable with. The wrinkle of Harry being an alien is becoming more of a factor in this series, and makes the situation immediately more tense and interesting. Two issues into this series, Hogan is letting this story unfold brilliantly, with excellent pacing that makes the issue feel like there is a solid amount of story without giving away too much. The crime Harry is investigating is convoluted, mysterious and gripping: Hogan crafts a mystery where readers simply have to know what is happening. This is really strongly written murder-mystery with an intriguing sci-fi element and very strong dialogue.

Steve Parkhouse’s art is what sells the murder-mystery feel of the story. His style is perfect for the tone of this story, and he does an excellent job with Harry’s expressions. For a relatively featureless character, Parkhouse does a great job of infusing him with empathy. There are points in this issue that are inconsistent, but Parkhouse’s overall world is strong and at no point does it ever look awkward to have an alien wandering around the Seattle area. His line work is solid throughout the issue and compliments the story well.

This is a solid issue in the middle of this mini-series and it drives the story forward well. For fans of murder mystery shows with a twist, Resident Alien will be right up your alley. Issue #2 is well crafted and a strong issue for readers to dive into. Resident Alien is as strong as ever, and fans of the first series will be right at home with this issue.