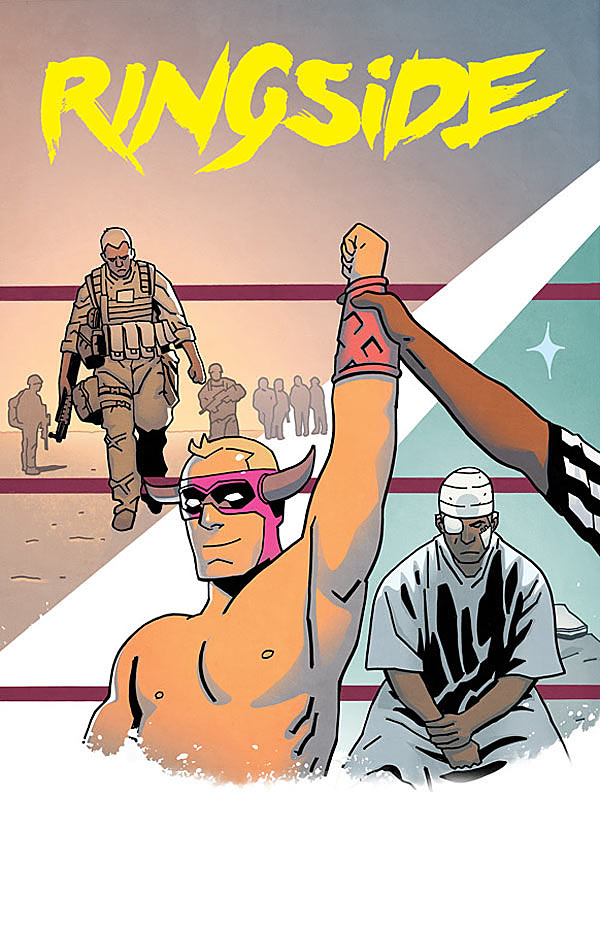 There’s wrestling industry chatter in the wrestling comic! Ringside started tight and stayed tight without much of that thing it’s sort of about, but now that we’re getting deeper into it, I couldn’t be happier.

Wrestling isn’t like any of the other popular set ups for comics these days, like rock bands or super-heroes where there’s a wide enough fluency to center it right off the bat. So it only makes sense to let the industry chatter and the backstage intrigue simmer for a bit in exchange for building up the characters outside the context of the industry. “I hate that insider crap,” the promotion owner tells one of the writers, “No room for it here. We just want people who know how to tell a story.” There’s probably more than a little truth to that statement in Joe Keatinge’s approach to the title.

After an issue of basically no wrestling stuff at all, we get a flashback to what appears to be the end of Ted and Danny’s relationship when Danny got his call up to developmental (the wrestling equivalent of a farm team) and Danny, in the present, regretting his entire career. In the confrontation over the stolen taser, he says he thought he was going to become be a star and embraced mediocrity instead.

The beauty of the series so far though is that we get a counterpoint to how Danny looks back on his career in Reynolds, who says that he’s embraced the fact that he’s not going to be one of the guys who gets a t-shirt. He’s glad to be in the business and doing the work he wants to.

Now that we have clarity about Danny and Ted’s relationship, Reynolds, who seems to be adjusting well to the business and has kept his own relationship afloat so far, is emerging as a foil for Danny’s regrets and cynicism. It’s easy to focus on the nastier elements of the wrestling business and you could probably keep a lion’s share of the readership doing it, but pursuing an angle that illuminates why people engage with it despite those elements will lead to a much more rewarding story down the line.

The irony of Reynolds adjusting to his role is that he now has a champion in the writers room, and this is the really unique part of the book so far. Kayfabe, or the protection of the fact that wrestling is scripted (a “work” as opposed to a “shoot” in the parlance), has been rolled back to a certain degree in the modern era, but the writers room remains the most fiercely protected and opaque element of the business.

The WWE will open up it’s training center for a reality show following new recruits as they enter the business through the NXT developmental territory or follow the Divas roster around on their off time for it’s own version of The Hills, but at no point will the curtain around “creative” be lifted. So there’s a lot of riches to be reaped in Ragan’s plotline and how he adjusts to the business as a writer because of how rarely it’s been explored in fiction or reality.

All of the major beats for the art were settled by the second issue and the coloring isn’t quite as ambitious this go around as it was in the second issue, but Nick Barber has definitely tightened into a shorter range for how he plays with his cartooning than in the debut, which has really strengthened his storytelling. Ringside has found its stride and the only question left is what you’re gonna do when it runs all over you.