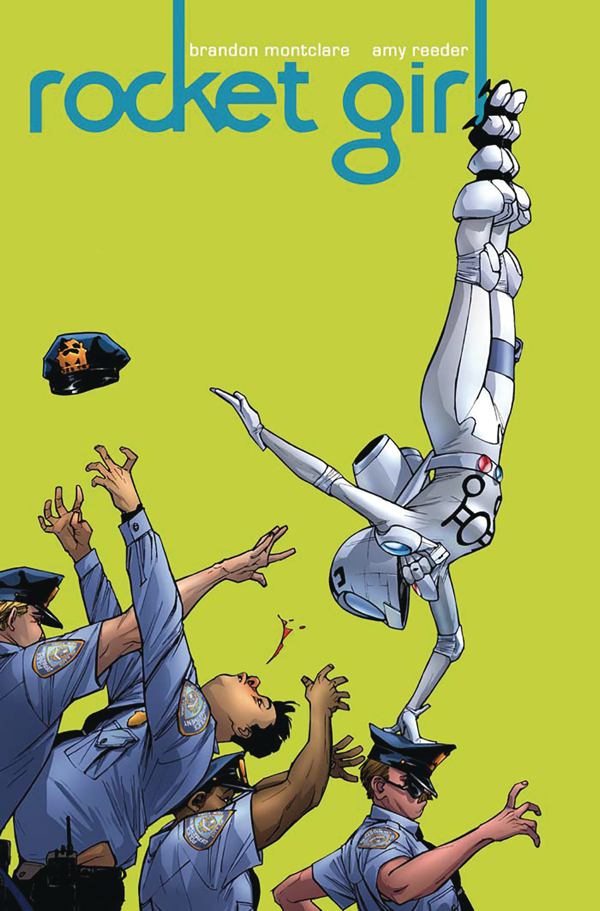 Rocket Girl is back after a very long hiatus: the seventh issue released in December 2015. Finally, we return to the story of DaYoung Johansson, a teen cop with a jetpack who’s traveled from a futuristic 2013 to the neon clothes and big hair of 1986. Unfortunately, while Amy Reeder’s art impresses as always, the story still lacks focus and urgency.

Rocket Girl‘s combat scenes have consistently been some of Reeder’s most fun and energetic work. Seeing DaYoung leap and flip while taking on petty criminals is thrilling, and this issue opens with such a scene. However, this fight has no impact on or even connection to the overall story, and DaYoung quickly moves on from it. This is just one example of how the Rocket Girl series adds too many extraneous scenes and never builds a core plot for the reader to be hooked by.

This issue does not have a recap page or any recap narration or dialogue. Even if it did, Rocket Girl suffers from its large number of minor supporting characters who have not been developed in any memorable way. DaYoung’s bulk of dialogue in this issue is with four characters in an apartment. We’ve become acquainted with Annie before, but Chaz, Gene, and Ryder offer no emotional connection to the reader. The apartment scene would not have been terribly different if those three characters were absent, and it may have been better.

What makes Rocket Girl truly fun is all the ways Reeder draws facial expressions and lively scenes. We see DaYoung scowling as she impatiently stakes out a building. My favorite panel is a brief shot of DaYoung’s face inside her helmet as she blasts upward toward the reader. Several times, Reeder uses blue and pink streaks reflecting off the face of DaYoung’s helmet, and the effect is beautiful and magical.

Amy Reeder’s wizardry with colors and details makes every panel a visual treat. However, Rocket Girl has yet to show, rather than tell, Quintum Mechanics’ evil depths with any convincing urgency. While Rocket Girl might be absorbed better in a collected volume rather than isolated issues, this latest chapter fails to add emotional weight or plot cohesion.