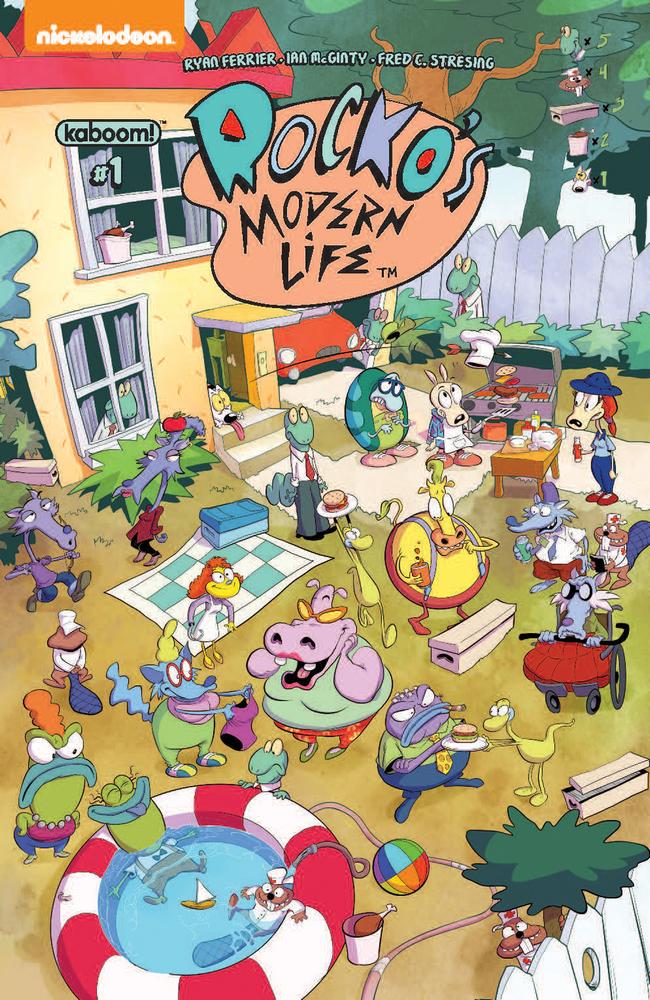 What do you do when you’re strapped for cash and you have bills to pay? Get a roommate! However, true to life, an endeavor with a new housemate doesn’t quite work out for Rocko. But with his options as thin as usual, what choice does he have?

Nostalgia can easily make or break a story. For Rocko’s Modern Life however, it’s almost as though the comic picks up where the series stopped. The story has the elements that made the franchise what it is and they all translate well to the page compared to the screen. It takes the ridiculousness of Rocko’s world while using him as a focal point of practicality, creating a story that is all parts fun, outrageous, and a reflection of generational discontent, just as the original animation did.

Ryan Ferrier’s story is as hilarious and enjoyable as it needs to be. I love the twists that happen at each point in the story, making it much more ridiculous with each development. Ferrier’s ability to capture the spirit of Rocko and his friends bodes well for the comic and I appreciate the feeling that there is little to no gap between the cartoon and this comic. Seeing these familiar characters in new but still similar form is endearing, but that feeling of fond remembrance is not what makes the comic what it is. Rather, Rocko’s Modern Life as a comic is solid thanks to Ferrier’s work.

Ian McGinty had a large task ahead by adapting Rocko for the page, but the artwork almost feels like there was no gap between the animation and the comic. The distorted expressions and reactions fit panel for panel. Adapting media is no small task, and I imagine there is some debate between what needs to stay and what needs to change, but McGinty makes this comic feel a though it holds the same spirit as the wildly inappropriate children’s cartoon. We get beats of everyday life of anthropomorphic animals juxtaposed with their exorbitant responses to the goings-on.

Fred C. Stresing’s colors are on par with the wax laden paper cups sprinkled throughout many of our childhoods. Each hue matches the lowkey disdain within Rocko’s world, from losing his job to pretty much being forced to have a roommate to survive. Brighter colors may have made the story more optimistic than needed, while darker tones may have sent it through the drudges of survival in this economic climate. Stresing finds a way to grasp the issues within Rocko’s world without pulling us too far down into the reality of today’s economics.

Rocko’s Modern Life is definitely a comic for those who loved the misadventures of the unlucky marsupial. Being able to transfer older stories into modern times is a valuable skill expressed by this creative team, leading me to think that Rocko may have been before his time regarding the strife of survival as a Gen X’er or Millennal. The humor in this comic is on point and definitely makes the entire franchise feel as though it is timeless, or, at the very least, applicable to many of us facing the same struggles today.