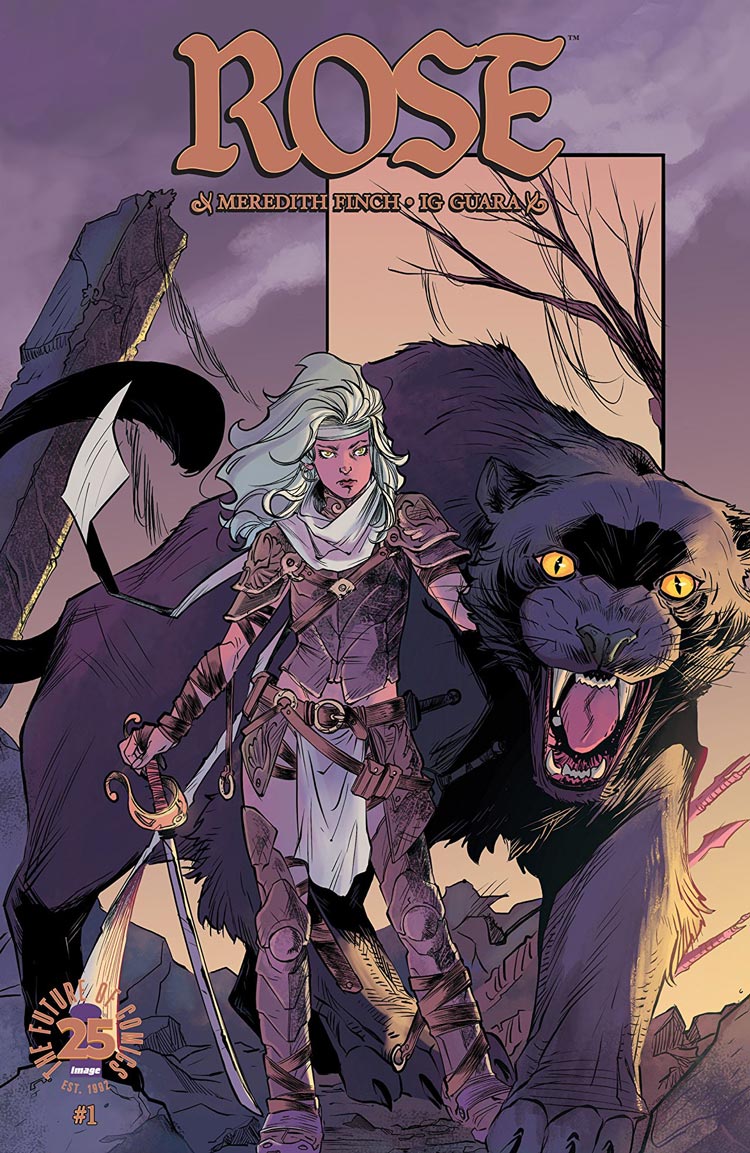 Darkness has taken the land. Magic has been choked, all but murdered out of existence under the iron fist of the Queen’s reign. Or, so it seems, until you read this first issue of Rose.

Finch has delivers a solid first issue. The world is immersive. The exposition is entertaining and interesting, which can be very hard to do. The two mains, Rose and the Queen, are distinctive. I love how insane the Drucilla is and believe there’s some sympathy, or at least understanding, as to why she’s so maniacal in her ways.

Rose, while not having as much time to show her character at the moment, feels like someone who can go from weakling to badass if given the proper training, especially with the revenge set up in this issue. I’m excited to see how Rose grows.

Guara’s art is captivating. It’s the kind of style you’d see in an old high fantasy, with some modern upgrades. I definitely think the hairstyles he chooses for some of the characters, especially Drucilla, make it look even more awesome. Everything always looks better with crazy hipster haircuts.

I love how creative Guara gets with some of the outfits people wear as well. There’s this one side character in particular who has no lines who looks really cool. They’re all dressed up in plague doctor equipment and it just really grabbed my attention.

Farrell’s coloring is perfect. She knows how to set moods with shades. The ominous, dark feelings of scenes seen through a blue light, the blazing reds of pure destruction as characters lose everything they hold dear – I appreciate that kind of coloring.

The lettering by Cardinal Rae is great as well. I find the distinctions Rae brings to the table make the comic better. Important characters have their own text boxes, whether it’s the yellow of the narrator, the red of Rose, or the blue of Drucilla. They’re subtle touches, but they add to the comic.

I’d definitely recommend reading Rose. It’s a high fantasy tale with slight modern tweaks to it. It’s a tale of revenge and tragedy, of a land overcome by darkness which will be saved by a ray of shining hope. It’s well written, it’s wonderfully drawn, and it’s something you should be reading.