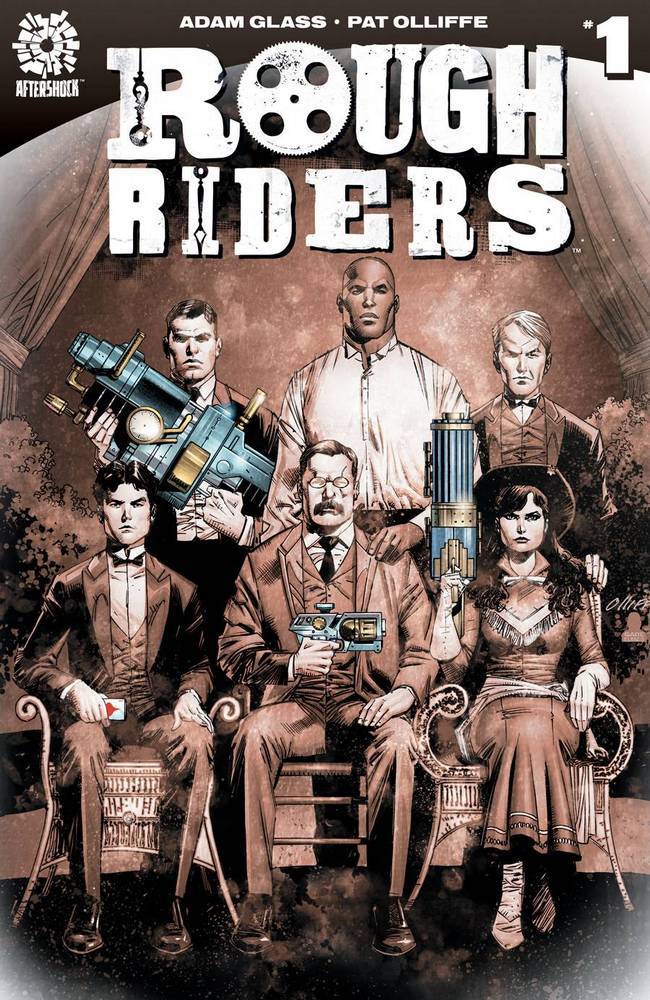 The cover to Rough Riders #1 had me thinking that the story inside would offer no less than an adventure that was part League of Extraordinary Gentlemen, part Manifest Destiny, with a side of steampunk, left to simmer for a bit. This issue is just the first steps towards what the title will become, but it’s a very solid, confident first steps.

Writer Adam Glass and artist Patrick Oliffe introduce readers to this brave new world of yesteryear with a chaotic scene of a fire in a sweatshop in turn of the century (19th to 20th) America. A fire has broken out and the lives of many are at risk, or worse – already lost. Into that calamity Glass and Oliffe throw Theodore Roosevelt.

Still a couple years away from his presidency, Roosevelt is a vigilante hero by night and a soldier of democracy by day. Glass gives him the presupposed fiery personality and grit, as Teddy Roosevelt literally swings in to save the day. From there Glass crawls inside Roosevelt’s head for narrative purposes, commandeering the one-time commander-in-chief to guide the reader along the way. Roosevelt is given the task to assemble a team and head to Cuba, which is more than likely going to take a couple issues to gather the sextet shown on the cover. In this issue, we meet Jack Johnson, not the modern-day songwriter, but prolific boxer finding his path to greatness. His interaction with Roosevelt is by far the highlight of Rough Riders #1.

At first glance, and most notably on the cover of Rough Riders #1, Jack Johnson is unmistakably based on Cam Newton, while Oliffe chooses to bypass Robin Williams’ portrayal of Teddy Roosevelt from the Night At The Museum series. That gives Roosevelt a larger-than-life quality, but it also diffuses the humanity that Williams placed in the character for generation who will consider the “turn of the century” to be 2001.

Having earned his stripes with work on a plethora of DC and Marvel super hero properties, it seems as though Oliffe has found the title he was meant to draw. Based in reality, but tinged with the fantastic, Rough Riders is an adventure with one hand extended to the reader. Oliffe uses the figures to make eye contact, drawing the reader in and never giving them opportunity to retreat. Oliffe makes some fantastic art choices throughout Rough Riders #1, and most of them pay off beautifully, such as Roosevelt’s first appearance in the dirigible above the burning warehouse. Additionally, Oliffe has continued to evolve stylistically, with several panels in Rough Riders #1 that feed readers glimpses of shading akin to Denys Cowan. Oliffe doesn’t have an inker on this piece, and it works well. Colorist Gabe Eltaeb follows Oliffe’s lead, keeping colors based in reality, but finding opportunity to expand, play with temperature, and infuse emotion. Sal Cipriano brings it all together with sharp lettering that is courteous of the artwork, while still identifying the conversation thoroughly. The rougher caption boxes have a worn appearance about them, but some of the sound effects are just a little too sleek for a book that is settling in as period piece.

As someone who thoroughly enjoys Manifest Destiny, but never really engaged with my history classes (my worst subject throughout my studies), I was intrigued by the concept of Rough Riders. Then I saw the cover. The cover image in solicits several months back hooked me in, putting Rough Riders #1 on my radar, and I am thankful that my local comic shop was able to put one in my hands. I’m not going to crown this as my new favorite read, but it is smart, self-contained, and action-packed. Thanks to Glass, Oliffe, Eltaeb, Cipriano, and editor Mike Marts, I’m invested. Now, bring on the second issue.