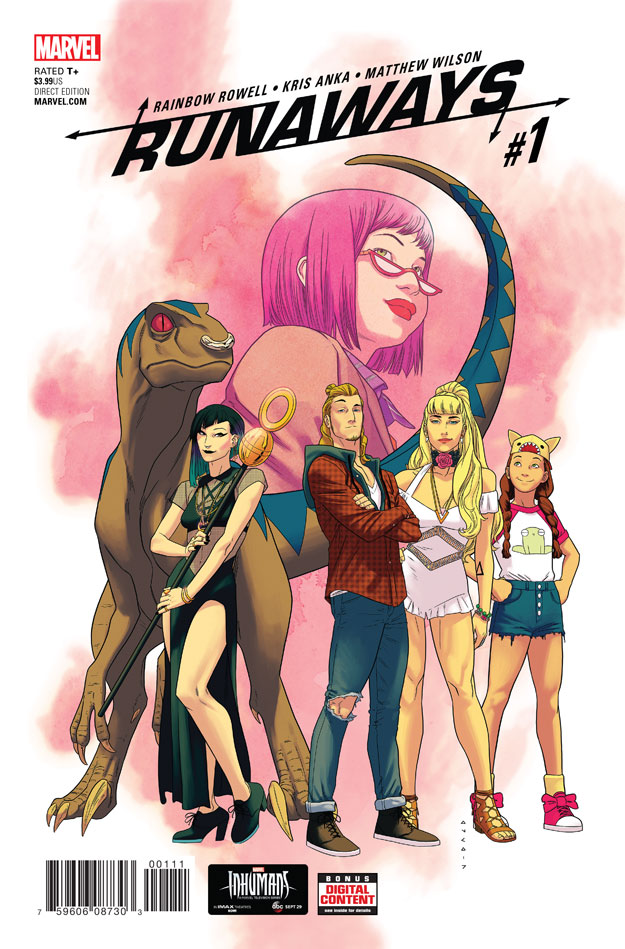 Show me where it hurts.

Nico Minoru has been put through the ringer in too many ways to count, which is why Chase’s sudden appearance doesn’t exactly lead to a heartfelt reunion. History as Nico knew it changes before her eyes as she and her old friend work together to undo something terrible.

Runaways #1 is an immediately jarring return to the lives of the rag-tag adolescents. With age and experience, they are very different people, and this first foray into their lives gives me the impression that the others we are sure to see down the road aren’t quite the same either. Introductions like what we see in this issue can go a couple of ways for a new series, and I can see how both may play out for readers.

For anyone familiar with the Runaways, this story may be mind-blowing. Gert’s death was huge for each of the members of the team when it initially happened, so to find that things may not have played out as we expected is a major deal. Yet, in the same vein, the story relies heavily on past continuity, so it may be tricky for new readers.

Even with on point aesthetics, there’s a lot wading in the history of the series and its characters which may not fully resonate with everyone. I enjoy a gobsmacking adventure that puts us right into the fire, but that may not be everyone’s wave.

Rainbow Rowell’s narrative layout takes an intense, visceral moment and spreads it out so that we can digest the Chase and Nico’s emotions. At every turn, with every spell, there is a complication. Add in time-travel and you have a lot of weaving threads to manage. Nico and Chase’s actions make sense within the story and they both manifest desperation differently. One is running out of magic, while the other is scrambling to place together a time-altering plan.

Rowell’s use of both of these characters will undoubtedly leave an important mark on the series and it’s clear how this effect will ripple through the subsequent issues. A small but welcome touch was the inclusion of two women who are romantically involved. While we don’t see this development until the issue is almost over, Rowell shows that inclusion can occur with a primary focus in the narrative or even in secondary and tertiary characters to a story.

Kris Anka’s style is well-suited to the older Runaways. Just as their personalities have changed, so have their appearances, appropriately and creatively rendered by Anka and keeping in spirit with who the characters are. I like the emotional play by play and how it impacts the story, taking what is likely a small span of time and turning it into a heart pounding experience for both the reader and the characters. Anka’s use of Nico moves through turmoil and calm as she casts spells, creating an important visual impact for the comic.

One of my favorite parts of the entire Runaways series is how it took the mundane reality of being a child or teenager and infused it with the out-there nature of the Marvel universe, something which Matthew Wilson reflects through colors. The dull yellow glow of Nico’s apartment is similar to the feeling of late adolescence and early adulthood which is now marked by a feeling of reduced independence and increased uncertainty. Wilson’s colors are perhaps best encapsulated in the opening scenes of the comic, reflecting on Nico’s adventures and why she is in her specific emotional place.

Runaways #1 is bringing back a lot of characters I personally love and creating a new emotional and temporal context for each of them. Three prominent members show up as pivotal markers for the story to come, and I can’t wait to see how everyone else fits into the more grand scheme. There are challenges to the comic being continuity-dependent, even if the emotional foundation is compelling, so this may work better for established fans compared to new readers.

With enough exploration, though, this comic could be a hit for everyone, especially if it touches upon the vital elements of defiance, rebellion, and queerness that preceding volumes expressed or approached.