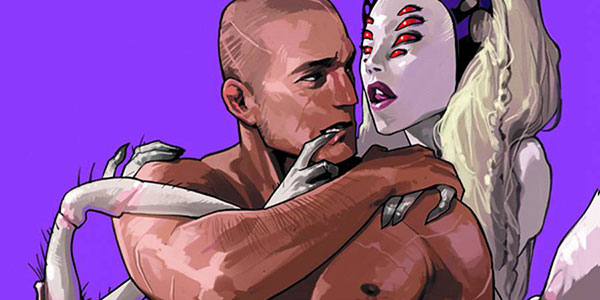 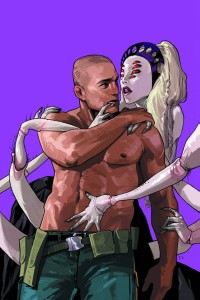 Saga #9 is a whole issue dedicated to The Will and his ever expanding supporting cast — a change of pace at a perfect time for the series.  No Marko and Alana in sight for a whole month, but that’s not a bad thing at all.

Vaughan does a great job at giving even more depth to The Will and also revealing much more about Gwendolyn, who was introduced in issue 8.  The dialogue between The Will and Gwendolyn steals the show this issue. For how much it could be, it was one of the more light-hearted conversations in Saga and had a fun back and forth, even more so when his lying cat interjects into the conversations. With so many characters jumping in and out of this series, it’s very important when they have the time to shine, that it is taken full advantage of. With the little we’ve already seen of Gwendolyn, her past and previous relationships make her now one of the most interesting characters in the comic. I don’t know where the series will take these characters, but I would be happy to have more stories told with this team-up.

For how impressive Saga has been so far as a series, I do feel like it has hit its first stumbling block in storytelling. The ending to this issue, and thus the basis of how the next few issues will play out, was very very convenient.  Not to reveal anything in the review, but how The Will is given the lead he needs on where to go to next felt like a bit of deus ex machina. Anyone not familiar with the term, “deus ex machina” means that a problem for the main character is abruptly solved by a new introduction from some other plot, character, ability etc. Saga spans many planets and moons and alien races, and to have the final conflict set up on such pure chance like this was a real letdown.

This issue cemented it for me that Saga has the best art of any ongoing comic right now. Everything is perfect. The character designs, the facial expressions, and body language make these characters jump off the page. Even after just 9 issues, the universe feels so fleshed out with alien races and technology, and Vaughan and Staples STILL continue to create new unique ones for each issue. I’m most curious from where they received inspiration for the spaceship designs in the title. They aren’t like anything I’ve seen in a science fiction story before.

Even with a slight misstep this month, Saga is still better than 95% of what is out there in the comic book stores right now. Don’t let my critique sway you in thinking this series is on a decline, Saga is a must read every month.