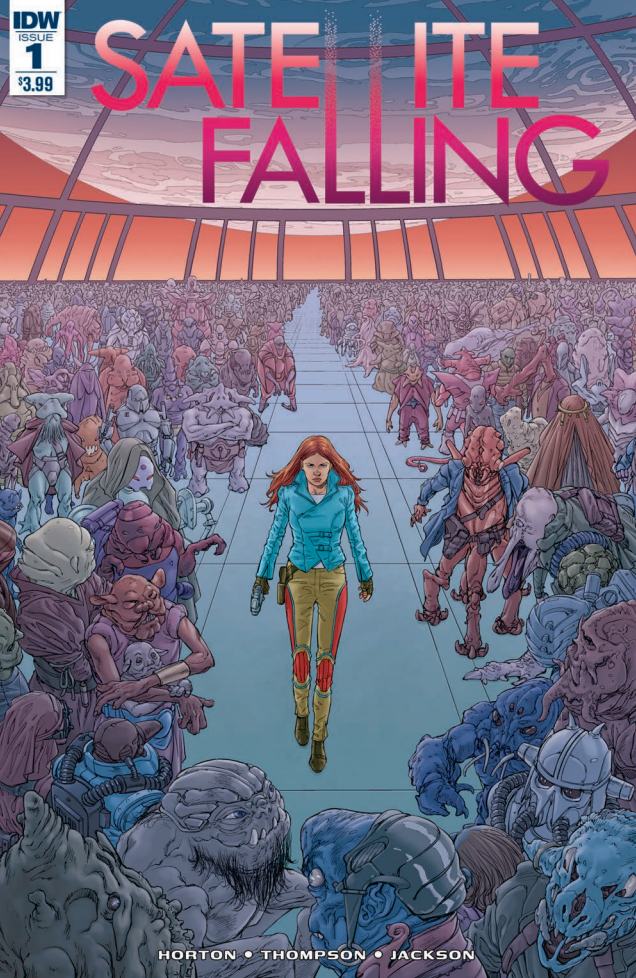 The sole human on a satellite populated by aliens makes her way as a bounty hunter, but her latest mission is going to change her life forever…

Satellite Falling is a science fiction detective story with a noir feel. The first issue introduces us to Lilly, the singular human on a satellite with a diverse population of aliens. She works as a bounty hunter for the police and, following a tryst with her boss, gets pulled into a sting operation that launches the series’ larger plot.

A hallmark of well-told science fiction is seamless world-building, and Satellite Falling manages it masterfully. We’re never plopped down for exposition, never given a history lesson or a detailed schematic of the biological traits of the various species that populate the satellite. Indeed, the satellite is never even given a name, other than Satellite. Yet we’re given just enough hints at how the world works to whet our apetite for more: Earth is xenophobic, and that xenophobia causes humans to be held in poor regard by other species; the police chief’s race is sexually fluid, and thinks little of changing sex at the merest suggestion; hologrammatic disguises are available, seamlessly deceptive, but illegal. Satellite Falling manages the difficult task of stoking our curiosity without boring us with details.

The first issue gives us a tantalizing glimpse into Lilly’s inner life. All of the narration takes the form of her inner monologue as she mentally talks to her dead lover, Eva. She gives updates on her life, apologizes for infidelity, tries to explain herself to Eva’s ever-present nonpresence. It’s refreshing to see a lesbian protagonist, presented as well-rounded and human, flawed, but real. Lilly’s sexuality helped me relate to her, but her inner struggle with guilt at Eva’s passing is what really endeared her to me.

It’s also refreshing to see female sexual pleasure depicted on-panel, a disturbing rarity in mainstream comics. The sex scene between Lilly and the Chief of Police focuses on Lilly at the moment of climax and after. It’s drawn in a way that’s sensual without feeling voyeuristic or exploitative. It also leads with a panel depicting framed photos of Eva and Lilly, showing that, even mid-coitus, her deceased lover looms in Lilly’s mind. The depiction of the chief’s breasts as realistically flat and floppy as she lay on her back is enough to forgive the creators for making yet another alien species that has a conventionally attractive human body from the neck down.

I will say that I’m a little unsure of the handling of the chief’s casual sex fluidity. He hits on Lilly, she rebuffs him by saying she only likes women, and he metamorphoses into a female body, remarking that his (her?) people aren’t hung up on sex. It seems likely that the chief’s fluidity is more window dressing than a subject of interest for the story going forward, and the ease of transition is alien, literally and metaphorically. It was pleasant to have a relatable lesbian character in Lilly; it seems unlikely that a trans reader would find the chief similarly relatable. At the same time, I lack the experience to judge; there are a lot of interesting issues to pull apart, here, and I fear I’m not the person to do the pulling.

The art is fantastic. Futuristic cityscapes are rendered with tantalizing detail. The alien species are unique and exotic, yet their body language and physiognomy makes them feel human in their expression of emotion. Particular care is given to Lilly’s face, which is frequently depicted in close-up throughout the issue. Thompson gives Lilly subtle nuances of expression that simultaneously provides the reader with a window into her thoughts and helps guide us in our reaction to an utterly alien environment.

Jackson’s coloring adds further life to the art, depicting a world in bright pastels that catch the eye and make the world feel vibrant. Shades of orange, blue, and purple illuminate the satellite and its inhabitants and bring it to life. This is truly a gorgeous book to look at.

First issues are difficult. They not only have to set up the story, and the characters, and the world, they also have to act as a sales pitch for the series as a whole. Satellite Falling #1 does an admirable job on all accounts. The story is intriguing, the characters nuanced, the world engrossing, and it offers the promise of a fantastic science fiction tale to come. Satellite Falling #1 is both an auspicious start and a fantastic read in and of itself.