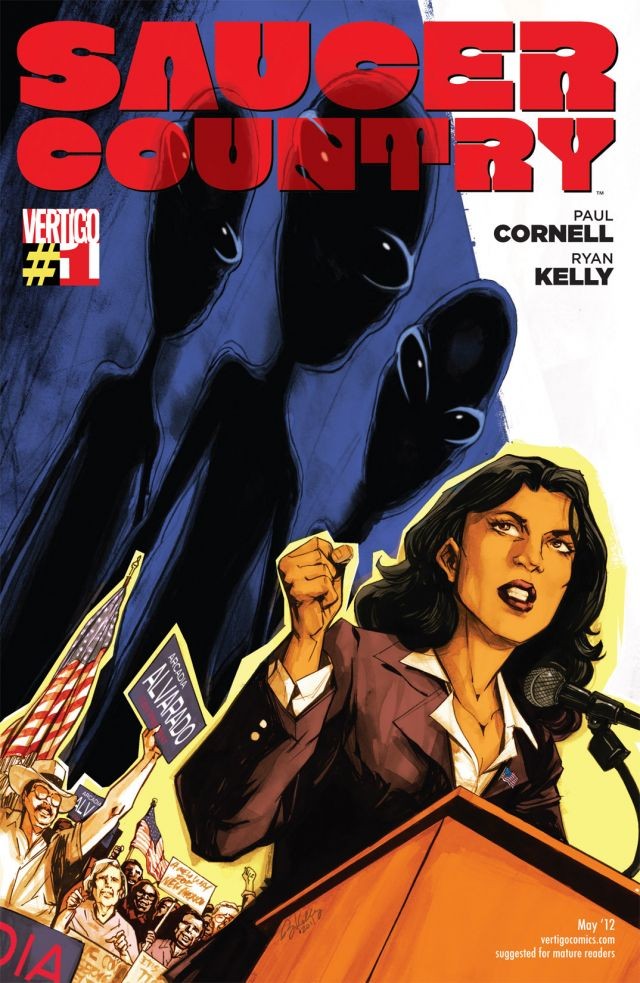 If you thought that Paul Cornell was showing promise on Stormwatch, grab this book now. Stop reading and go get Saucer Country. If Stormwatch had been a complete work, I would be calling this a thematic sequel. Since Cornell’s vision for that series has been abandoned, I will just be grateful he has such a ready home for the weirdness. I expect the easy comparisons to X-Files but this book is so much more. In Saucer Country, Cornell’s Governor Alvarado is about to launch a campaign for President when she and her ex-husband experience what UFOlogists call “missing time.”

Cornell is setting up for a long story. I was put in mind of the first issue of Y: The Last Man which was also heavy on character introduction and only introduced the series’ concept near the end of the issue. Cornell sets up a few paths for the reader and only on the final page shows us where he is really going with all of this. We meet a dynamic cast of characters who have no ready connections to each other. I am very interested how these people will cross paths.

Ryan Kelly’s art is strong and, for want of a better term, feels very Vertigo. He keeps things moving in what are necessarily text-heavy scenes and varies the layout and style as we get into the more horror and sci-fi areas. Kelly keeps us quite grounded in the real world of the story and doesn’t give away too much on what is real and what is only in the imaginations of the characters. He has very good detail in his backgrounds which give the book a lot of depth, that his locations are real places where people live and work.

As I anticipate Cornell keeping with the Vertigo tradition of writing for trade, I will likely trade-wait on this series as I did on Y: The Last Man. I’m not positive I can go that long without checking back in on these characters, though. I’m on board with what has started here.