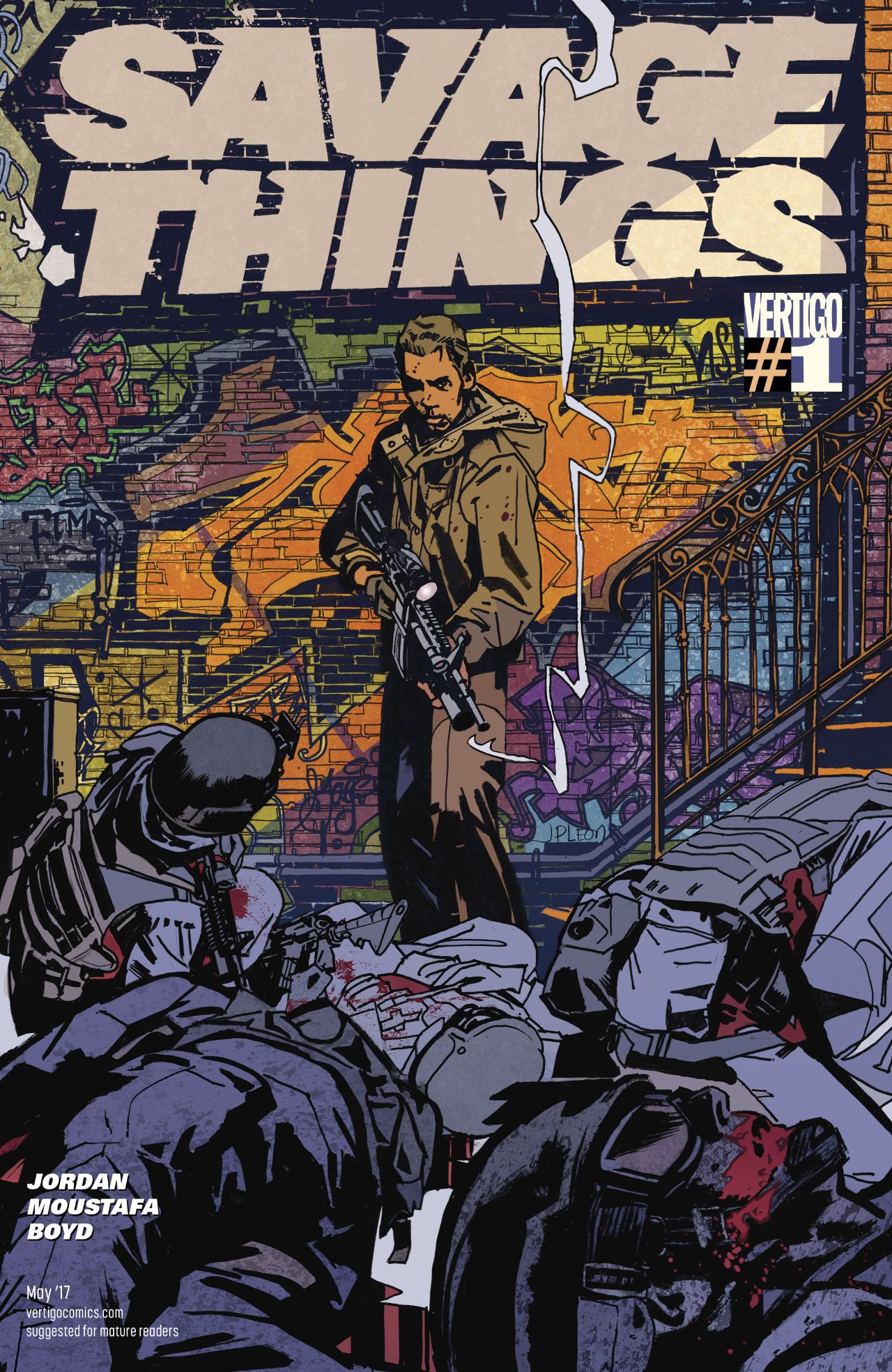 It’s a brave new world out there, and it’s made from the blood, guts, and murders of the people. Jordan spins a freshly grounded thriller in this limited series with a chilling opening from beginning to end.

From the get-go, Savage Things pulls no punches in it’s nature of being twisted with a cause. We’re introduced to our pair of eyes for the journey, Abel as he’ll later be named. It’s a kid like intro all things considered that takes a swerve off of the rails the moment he gets back home from burning something in a field.

It’s all rendered hauntingly by Moustafah and Boyd, the expressions, shadows increasing the grimness of what’s going on, everything is in place. The colors throughout really help sell the first issue. Nothing is overly saturated and brightness is dimmed to the absolute minimum.

Jordan provides a bleak world and outlook with his world of highly trained monsters and the dialogue mirrors that sentiment. Abel is just a kid and speaks matter of fact about staring potential death in the face. It reads like a much sharper Deadly Class introduction with a more murderous intent about causing chaos around the United States of America.

We’re further introduced into an equally sadistic and terrifying support cast and the villain of the series(?) via flashback to the birth and display of the Black Forest monsters. The dulled colors and background help to highlight the expressive characters and increase the tension of Jordan’s speeches.

Never has a test that causes for twenty bodies to be killed before you can move on been unnerving especially with our protagonist smiling about it. There’s a game afoot in the present day that’s kicked off with a cleaner version of a scene from one of Jordan’s previous works The Strange Talent of Luther Strode.

Suffice it to say, the past never truly stays buried and the monsters are out to play and they have no problem hiding their calling card. It’s violence not for the sake of it, but to showcase just who Abel has going against him…because he too can exact this level of pain and suffering on the public.

The final pages catch us up to the present and we’re treated to an extended sequence of Abel cleverly evading a SWAT team on a city street. It plays out like any thriller chase scene with the predator outsmarting and hindering the prey at every turn. Abel is levels above those tracking him and Jordan reinforces this notion doubly so when the guns come out to play. Moustafah delivers a quick and deadly fight scene that involves the environment showcasing just how outclassed the rest of the world is compared to Abel and from the looks of what’s to come…he’ll need it and maybe an ally or two along the way.

Savage Things doesn’t hold back from what it’s set out to do. It’s cold, calculating, bloody, demented, and mature like your favorite late night show on HBO. Jordan has the perfect art team for this dark and mysterious world of clandestine organizations and monsters set out to destabilize everything we hold dear. I don’t think this series is looking for redeemable characters to save the day, these are bad people doing bad things in the name of saving the day. If this limited series can keep this first issues’s sparks of intrigue, brutalness, and deadpan humor then I believe Savage Things will go down as a phenomenal story. Vertigo has a winner with Jordan and his Horror-Spy Thriller.