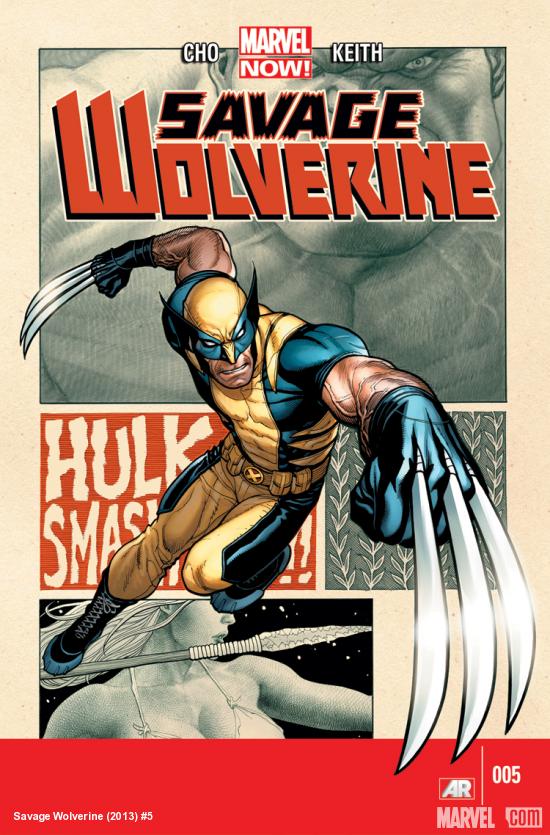 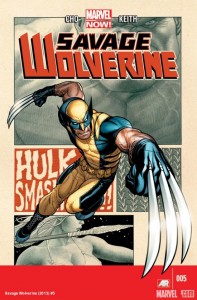 Frank Cho’s arc in Savage Wolverine concludes with issue #5, and while his art is at the same consistently high level as always, where is the story?

I normally discuss the writing of a book first, but in the case of this comic it is difficult to do so as there isn’t much of a script at all in Savage Wolverine #5. I’m not just talking dialogue, as there is very little story told through visuals or dialogue in this comic. I read through this issue in 3 minutes, and that was with time spent examing Cho’s artwork. There are some mildly amusing moments and quips throughout, and I’m by no means against a “lighter” read than some verbose comics from time to time, but Savage Wolverine #5 is wafer thin when it comes to story. Cho’s first issues in this series weren’t exactly talking head books by any means, but there was a lot more to them with respect to story and well written dialogue. Both Shanna and Wolverine were reduced to stock characters in this issue, and Amadeus Cho’s quips come across forced and miss the mark throughout the issue.

Cho’s art is crisp and strong, as per usual. There are some very nice splash pages that are easy on the eyes, but they kill the pacing and leave this comic so hollow that they just aren’t worth it. The comic almost reads like a pinup book rather than an arc conclusion and no matter how well crafted the art is, there has to be some meat in the story to tie it all together. I do want to give a shout out to Jason Keith, the colourist of this issue. His colours are vibrant and work extremely well with Cho’s pencils, complimenting Cho’s style and adding a nice extra punch to the artwork.

Savage Wolverine #5 was, sadly, a weak ending to the story Frank Cho has been telling. His art is strong, but that’s all there is in this comic.