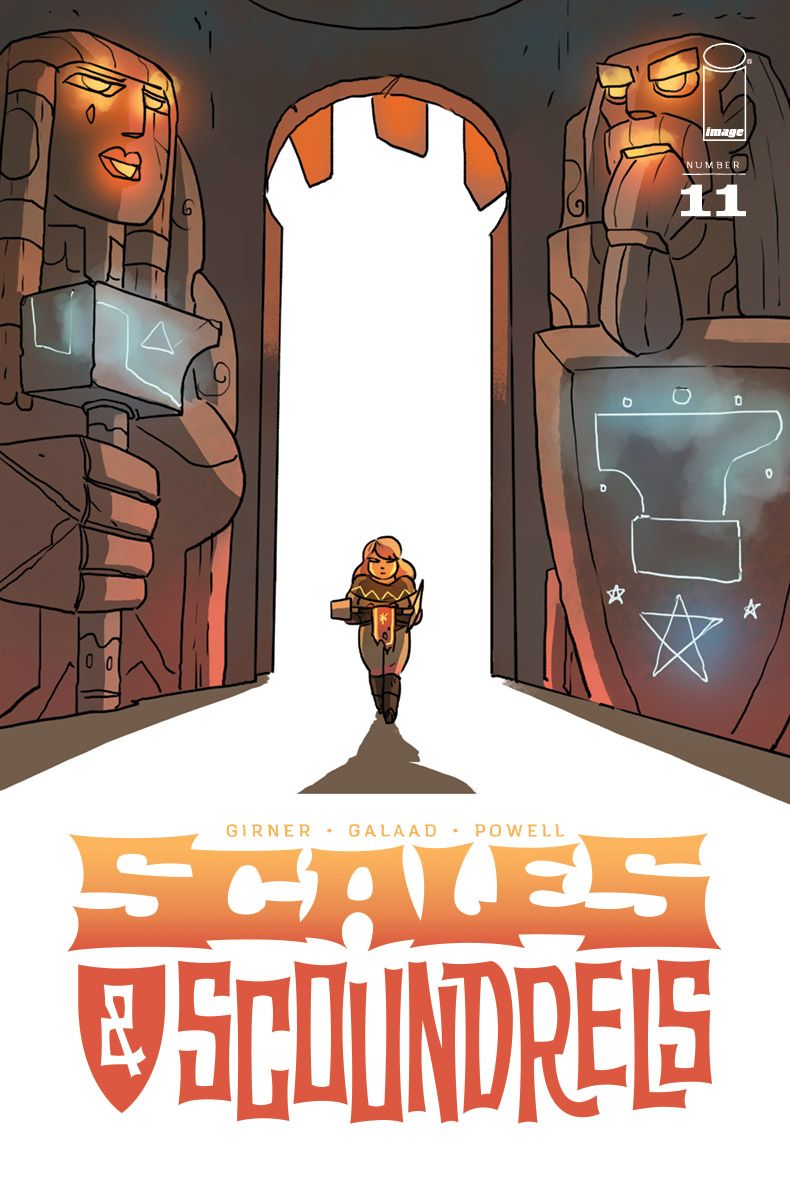 Homecoming’s can be hard, especially with devastating news to bring back. Dorma returns to her home in the mountains this issue of Scales & Scoundrels!

This issue is fascinating because I think this is the first issue that doesn’t have Luv in it at all. The entire story is about Dorma and the fallout of her brother and her own actions and it’s refreshing to have an issue completely about one of the beloved side characters.

The deep dive into dwarvin culture in general is fascinating. From the mentions of a God of War to “the great wheel turns” phrase, there’s these little tidbits of information about their way of life sprinkled about. I think the most fascinating piece are the mourning rituals. In order to allow her brother’s spirit to sleep safely with the spirits of her other ancestors within the stones in a Dwarvin temple, Dorma must carve out a memory to link her brother to his resting place with his pickaxe. It’s a nice detail that works well with the overall society constructed by Girner.

Dorma’s Gran-Gran is fantastic. Her character design makes her look like a lump of old woman and clothes and her casual aura is a nice contrast to the usual uptight old lady stereotype.

The design of the dwarvin kingdom is intriguing. It’s this grand mix of underground simplistic architecture with intricate murals and stained glass that feel like they should be part of an exorbitant castle.

There’s a palette of reds and oranges throughout the entire issue and while that goes along with the sort of adobe style housing and the fire made light that the dwarves have, it also intertwines with Dorma’s overall anger at the society she came from, her frustration with what happened to her brother as well as her frustration towards her society’s inability to change and evolve with the world around them.

My favorite page is a series of panels showing a variety of people and places and what they’re doing at the same time. Dorma carving out a memory for her brother’s resting place. Her father mourning the loss of his son with tears. Granta talking to her children. Aleq paving the way for new mines. Gran-Gran sitting thoughtfully. The resting place of the ancestors, silent and peaceful as its candles melt, its statues stare. It’s a great montage that looks at the surrounding life in the Dwarvin city as well as the impact of the death of Dorma’s brother.

Read Scales & Scoundrels. It may not be best to start at issue #11, but there is a good jumping on point that’s not issue #1 if you don’t want to start at the very beginning and it is well worth the read.