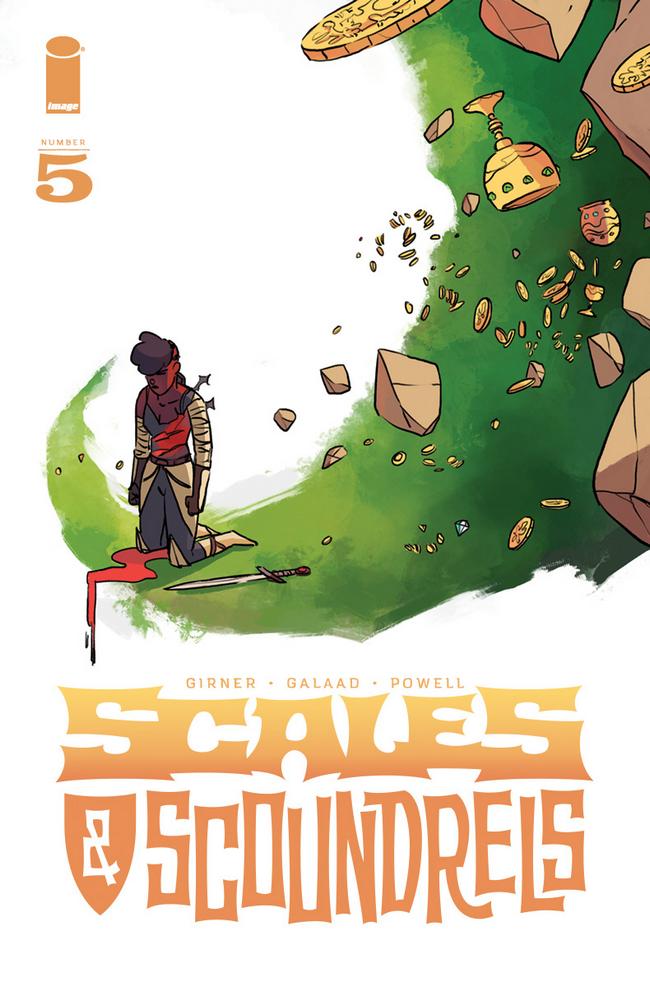 Lu and company found a civilization deeper in the caves than they had ever dreamed! However, the inhabitants don’t seem very welcoming. Will they survive? Find out in this exciting issue of Scales & Scoundrels!

Girner’s writing is phantasmagorical. I love the feel of the traditional fantasy modernized this way. I love the crass and smarter than she lets on Lu, the naïve yet growing up fast Aki, the strong and hardened Koro, the determined and braver by the second Dorma.

I love how Girner allows all four of the main characters to have dynamic, three-dimensional relationships with one another, especially the ones surrounding Koro. Honestly, while I deeply enjoy all the characters in this series, Koro is the most complex and compelling of them all, especially if you juxtapose what you learn about Koro, Lu, and Aki in this issue.

One of the most captivating elements of this series is Galaad’s character design. Without explaining too much, there is a wide variety of intriguing character designs for the fish people seen in the previous chapter and there is a design of a particular creature that appears first in this issue which is inspired.

The coloring in general is beautiful. Painted on vibrant skies surround deep turquoise waters highlighted with lighter blues. Grand orange monuments are littered with well-placed shadows. Hazes of green to yellow and red to orange emphasize danger, sharply contrasting one another in close panels. I really do love the coloring of this comic.

While I can’t exactly divulge information on what happens in the splash, there is a particularly stand out page involving Dorma which is fantastic. There’s a minimalism to it that feels lost and empty, almost hopeless. Yet, with how Dorma looks, and the ember of hope in her body language, perhaps not.

The lettering is awesome as well. Powell does a spectacular job distinguishing languages through the coloring of the word bubbles, which is a nice touch. There is also a particular language that has a very cool looking font that I really do need to applaud him on. The language wouldn’t seem so eerie, archaic, and ominous if not for Powell’s work.

I totally recommend Scales & Scoundrels. Should you start at issue #5? Probably not. I’d definitely suggest reading it all before reading this issue, but it is a fun, inventive series that more people should be reading.