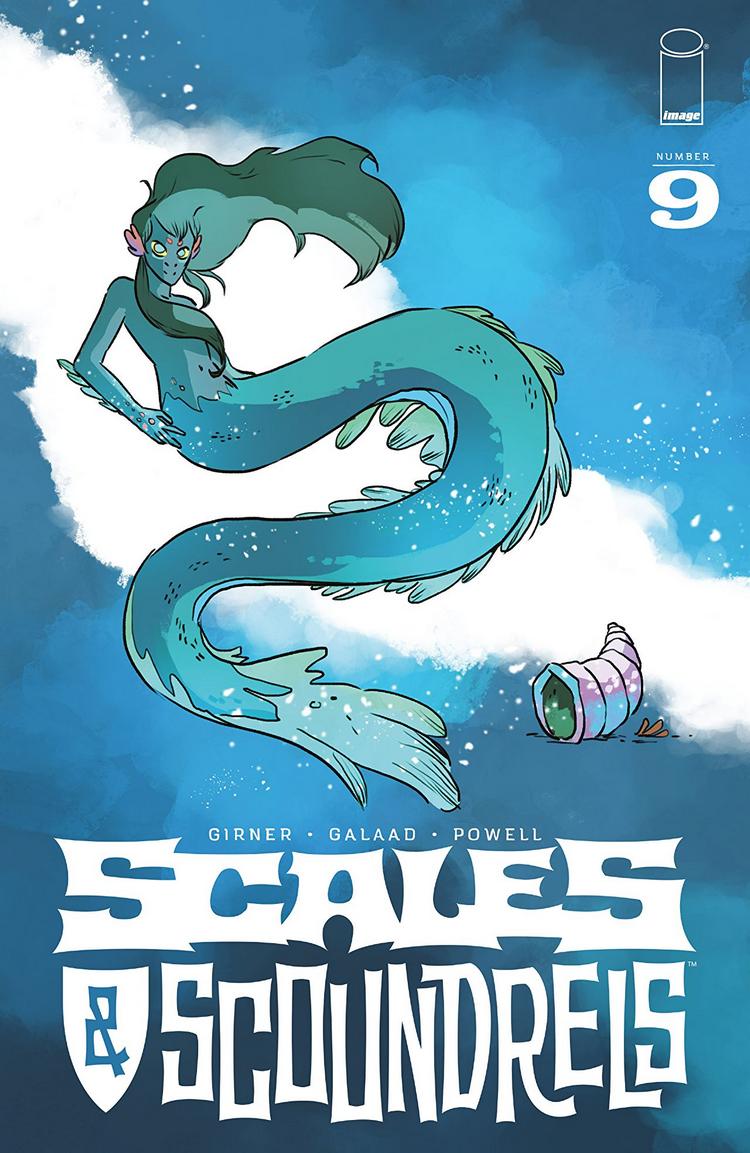 As Luvander travels aimlessly, what will she find when she wanders onto a beach? Find out in this exciting new issue of Scales & Scoundrels!

I love the storytelling done by Girner in this issue. The mostly silent portrayal of a miscommunication between a mermaid and a human man works fantastically with the more pictorial portrayals of occurrences rather than just words. It feels creative and inventive to work out what has happened to these two that Luv encounters rather than just words.

I love the bittersweetness to the tale as well. I love that, once again, Luv is shown that humans misunderstand the grand mystical creatures surrounding them and think narrowly about their own lives rather than trying to understand why what they deem a monster approached them in the first place. I like that Luv, once again, is fine with seeing this and, in the end, helps both the man and the mermaid get what they want.

Galaad’s work literally speaks for itself in this piece. Most of the tale is told through pictures describing events, what people are asking, the answers they give. It’s all well done, especially the splashes that Galaad has made of both the man and the mermaid explaining what occurred on the boat, depicting two very different events. It’s intriguing to see the perspectives, it’s very Rashomon.

The character design for the mermaid herself is beautiful. It’s not the usual human half shoved onto a fish. It looks more like a fish-like humanoid attached to a grand, eel-like back with darker tones coloring her. I like that there’s effort in making her not just a generic mermaid.

The lettering by Powell is well done. While most of the dialogue is depicted by Galaad’s art, there are a few small things that Powell does this issue that really work well. I love the mysterious blue-green cloudy filling of the mermaid’s speech bubbles. They add a mysterious layer to the creature. Even when everyone starts talking again, all the mermaid’s dialogue is a musical note, which I think really works for her character, especially with what the mermaid loves.

Read Scales & Scoundrels. Totally read it. I’d say read it from the beginning, but if you start with one of these one-off adventures, you’ll probably be fine too.