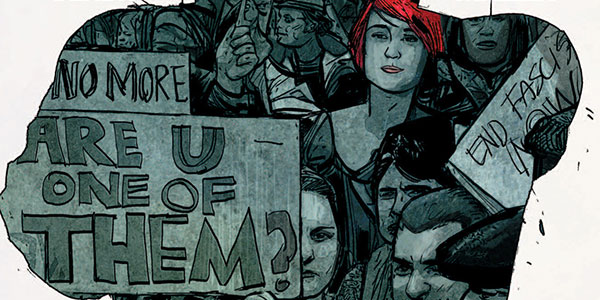 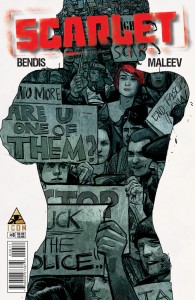 After more than a year’s hiatus in publication, chapter two of one woman’s fight against widespread police and political corruption begins in earnest. Victim of unwarranted assault by the Portland P.D., Scarlet Rue has become something of a 99% icon in the days after her boyfriend’s death and scapegoating by vice detectives. Gone underground in the wake of an FBI manhunt and subsequent rally appearance, Scarlet is ready to take her plan to the next level. And she’s no longer in it alone…

What Bendis does better than anything in this title is develop characters who can perpetrate terrible acts but still elicit a sincere degree of sympathy for their actions. It’s an interesting place in American history to be writing about a terrorist who is right in her motivations for action against the establishment. Certainly, Scarlet is capturing some amount of zeitgeist for economic and social upheaval (and honestly seems to have predicted it in its earlier issues), but it’s careful staging that allows Bendis’ characters to come off as completely vindicated in terrorist-level activity. In this installment, he does so succinctly through Iris’ story, quickly establishing with the reader that sometimes truly bad things happen to good people, and asks, why is it ok to let that keep happening? Introducing Iris and focusing on her father’s demise then lets Bendis proceed with moving the plot forward, a path that could easily get swallowed up in personal reflections if one is not careful. So, in the course of 28 pages (!), we get an emotional call to action, an intellectual explanation from Scarlet herself, and just enough action and movement to make us feel like we’ve actually moved to the next level. This is advanced comic book structure, people. We should be taking notes.

Artist Alex Maleev also returns with knock-down, drag-out glourious artwork that fits the serious tone of the story, but at the same time still maintains every bit of life in his characters. Scarlet never seems without an inner glow that helps reinforce her place as the reader’s focus, but it is in Iris’ backstory double page spreads that Maleev breaks out of the shadows with truly exemplary detail and emotion on that little girl’s face. The painterly quality of Maleev’s line, combined with a particularly reserved color palette, produce pages that genuinely slow you down upon reading, asking that you drink in the detail and lushness of line and color. Maleev and Bendis are the perfect collaborators in this sense, for once you slow down to catch the details, be they artistic or of dialogue, the reader is always rewarded for the effort.

I often say that irregular schedules on comics are instant death for me. If I can’t depend on a regular monthly (or even bi-monthly) release schedule, it’s not worth it for me to invest time and energy in a book. Throw that out the window here. Do I desperately want this book monthly (and word has it issue #7 is following very closely on the heels of #6)? Hell yeah. Would I wait as long as it takes to get this level of sublime beauty and thoughtful story at my local comic stand? Absolutely.