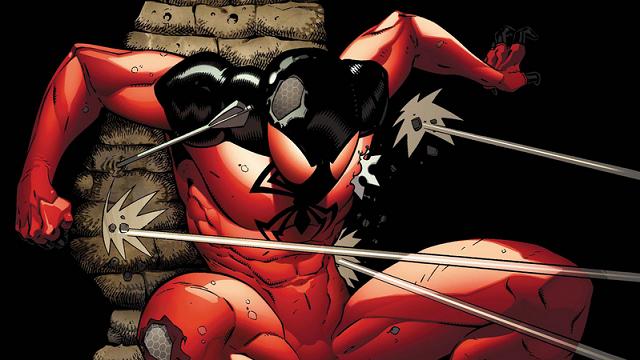 Christopher Yost has taken a character that is a clone of Spider-Man, possessing the exact same set of powers and skills, and made him one of the most entertaining and unique vigilante heroes in comics. Even though the costume does resemble Spidey in some ways, Yost has written this comic so well that all ties to Peter Parker are gone, severed as though they never existed. Kaine is his own man, with his own baggage and his own turf and it is great fun to see where Yost is headed with this. This issue, and series, is breaking new ground in every direction: new city, new side characters, new villains, and Yost is doing a great job of slowly peeling off the layers of who these people are without making readers massively overwhelmed. He is also doing a very good job of keeping Kaine true to his character. This man wants to reform, but he is still a vicious fighter and a take-no-prisoners type of warrior. Moreso than any other hero in Marvel’s line of comics right now I’d say Kaine embodies the term “warrior” I look forward to seeing where Yost takes this character.

And the second dynamic component that makes this book such a great read is artist Ryan Stegman. With each issue the bond between Yost and Stegman gets stronger as Yost leans on Stegman’s fantastic art to tell parts of these action-heavy stories. Scarlet Spider is a high octane book and Stegman pours tons of energy into every single panel. Stegman’s art is superhero action at it’s absolute best and while the action is fast and furious Stegman skillfully manages to add emotion to the fight sequences. The eyes of all the characters involved in the action in this issue are filled with a frenzied bloodlust that few artists are capable of portraying. With issues like this Stegman is cementing himself as one of the best artists in the world of comics.