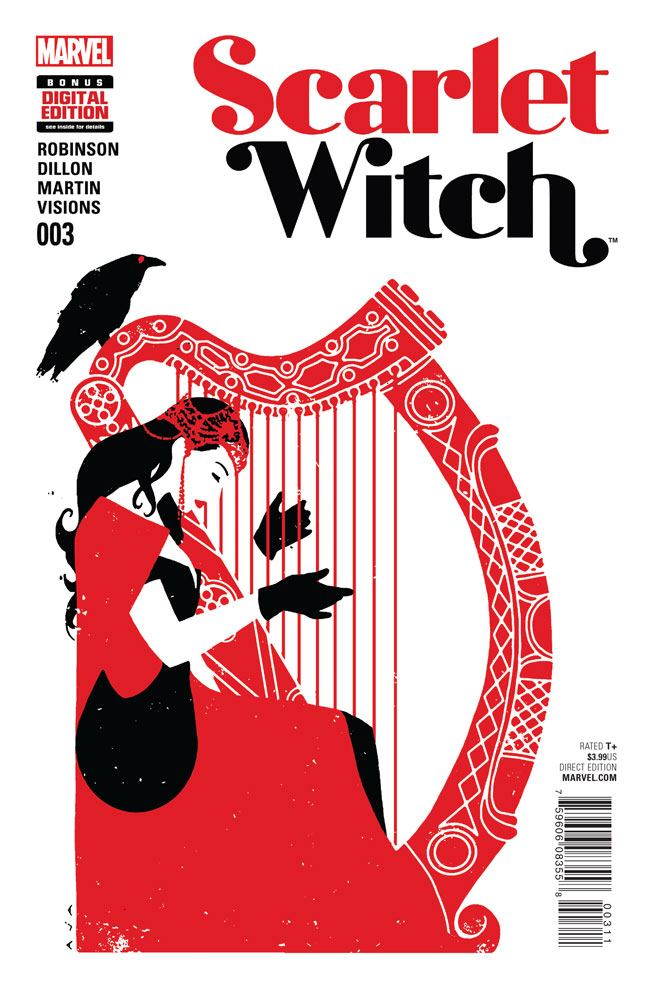 The answers lie in the Witches’ Road.

Wanda is on the next leg of her trip as she visits Ireland and comes close to the sinister menace behind the trouble in the world of magic. After she tries to heal a centuries old wound in one mystical locale, Wanda realizes there’s a different agenda behind the changes in magic. Stepping into an ethereal world, she comes face to face with a familiar visage as she searches for answers.

Inching closer and closer to the climax of this story, yet again we have another great part of Wanda’s adventure. She delves into magic and asserts her abilities as she tries to repair the deep wounds in her preternatural universe. There are some great displays throughout the issue, including Wanda’s magic, and it seems as though she’s truly in her element. As a solo series, Scarlet Witch has been stellar, and #3 is one more spectacular chapter.

What stands out to me in James Robinson’s writing of Wanda is that she’s coming into her own. While parts of her past seep into the story, as some background characters recognize her, she is undeterred. Robinson’s Wanda is determined and immensely knowledgeable about the world around her. The foray’s into Wanda’s internal experience make her world seem more real and palpable.

Coming off of the last two issues, the art was a bit of an adjustments. It was much more defined, concrete and relatively modern. Wanda essentially seemed as though she was a woman visiting Ireland on vacation, not a witch on a journey. However, once I got to the final pages the art began to integrate for a larger purpose. In the context of the previous issues and the last panels of Scarlet Witch #3, Steve Dillon and Frank Martin’s structured and distinct art makes a lot of sense. Dillon doesn’t capture an idyllic Ireland, as Wanda points out, but one that looks like any other place in the world, minus a rather large magical catastrophe. Such an image is important because it conveys that things feel relatively ‘normal’ to everyone else besides Wanda. Martin’s colors capture the dilemma of this issue against the everyday backdrop. Many of the colors are muted, some desolate, adding a sense of quiet urgency to the story. The vivid colors regarding Wanda’s magic are superb and such a prominent element against the darker colors throughout most of the story.

Chris Visions’ work on the final pages really struck me. The art is fluid and freeform, holding an eerily sketchlike, watercolor vibe. I would have loved for style from these two pages to permeate the entire issue, but as I pointed out above, having them in such an isolated spot makes them a bit more magical if you will. There’s a fiery darkness in Visions’ pages, highlighting the importance and depth of the Witches’ Road. I hope to see more of this work in the future, as it lends to the mystical bent of Wanda’s series thus far.

What I like about Scarlet Witch #3, especially in the context of the series thus far, is that it’s a holistic and immersive experience. The art and the writing all feel very deliberate, which I find integral in stories that involve magic. I’m excited for what the next chapter holds and how it fits in with the larger Marvel Universe.