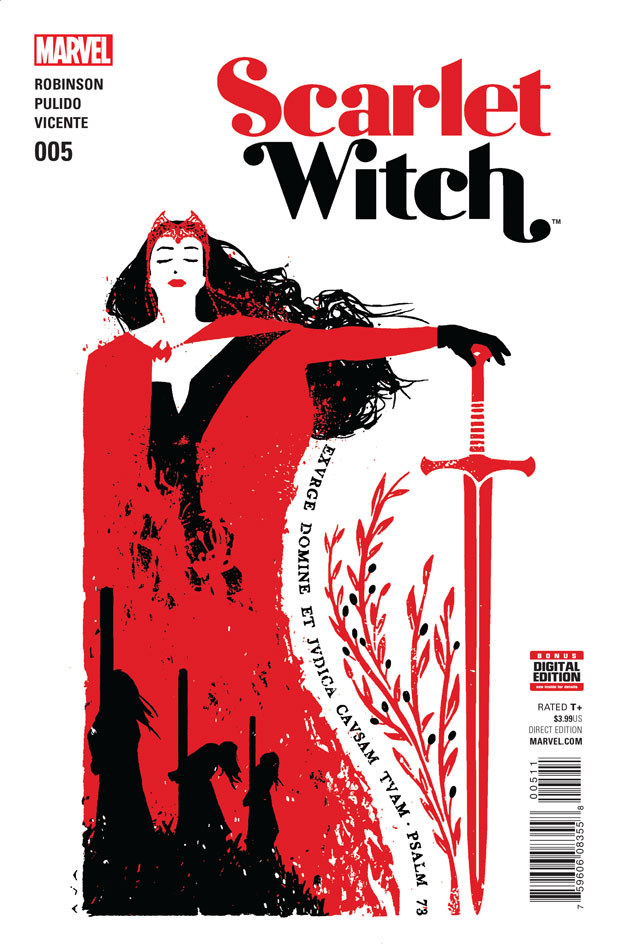 Sometimes a vow of silence is a protection.

Continuing with her mystical globetrotting, Wanda is in Spain to deal with a phantasm problem plaguing a convent. After getting a brief synopsis of the history of the dilemma, the Scarlet Witch dives deep into the catacombs of the church, becoming intimately aware of the nature of the possession. Wanda does what she does best and helps to find a solution while dealing with a number of supernatural entities as she recognizes something familiar in the subject of the ghostly affairs.

Scarlet Witch #5 is another notch in a heretofore spectacular series. The story feels like a one-shot, which is a nice change of pace from most ongoing series from any publisher. The era of the one-off story has felt increasingly distant as time has gone on, yet this installment of Wanda’s life helps to reveal the importance and value of such stories. It will undoubtedly tie in to a larger arc, but the fact that it feels insular is absolutely refreshing.

James Robinson’s Wanda continues to have a gumption that belies her history and what has been done with her characterization post Disassembled. In this issue, Wanda is in her natural element and displaying her core components. She’s magically adept and uses her abilities to investigate a supernatural situation, while also relating to others in a manner that feels real and compassionate. Robinson writes a Wanda that recognizes her past actions but is not plagued by them to the point of inaction, and any time this sort of narrative surfaces with her it’s worth mentioning. I appreciate that Robinson writes Wanda as feeling guilty, but not to the point that it diminishes her confidence or her abilities.

Javier Pulido delivers visuals that aren’t heavy on technical elements but that tell a story all their own. Initially, I was surprised, given that the series thus far had employed a variety of styles. Pulido’s art is simple, though this does not betray talent. Where the art excels in Scarlet Witch #5 is in the execution, in wordless panels and double-page spreads that tell a story that words would do no justice. There are some excellent uses of shadow, silhouette, and dimension in the majority of the issue that convey active and engaging images. Muntsa Vicente’s colors enhance this minimalism, using vivid colors for emphasis and pop and subtle use of shading to bring a light nuance to emotions and expression. There’s a reason there’s no dialogue on these pages, and this team brought the story to life with imaginative use of fewer artistic elements.

This series continues to be the one that Wanda has long deserved. If you want a good jumping on point for Scarlet Witch, issue #5 is definitely that. The story is not anchored by heavy continuity or even the previous arc. It incorporates elements of both without losing the essence and the power of the present installment. There are some great and very deft uses of art and storytelling that make this issue stand out among many others.