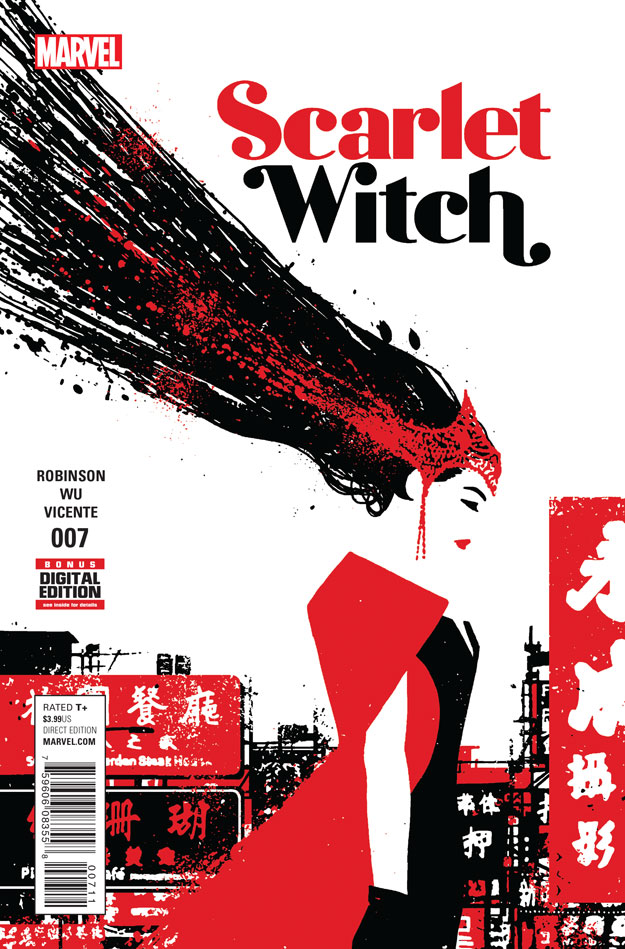 When you’re the Scarlet Witch, everyone knows who you are.

Wanda is in Hong Kong on another mystical case, this time to take care of the Tongji, an ancient Chinese wizard who has been granting wishes for centuries. With the help of Alice, also known as The Wu, who uses magic in a way that honors her mother father, she sets out to cut off the Dark Tongji’s power source and set souls in bondage free.

Scarlet Witch #7 feels like a quiet issue. It doesn’t have the same feel or effect as previous issues, but that allows the interaction between Wanda and Alice to shine. Much of the effect of the story is in Alice’s life as a witch and in her emotional connection to her dead mother. Despite there being conflict with this issue’s antagonist, there’s a shadowy peace that permeates the story, both before and after the climax.

James Robinson initially writes Wanda as the focus of this story, then slowly shifts emphasis to Alice, giving her the primary attention. Even though Wanda is the series’ protagonist, this tale is really about Alice, her love for her mother, and her relationship with magic. I like that Robinson allowed for another character to shine with our heroine, even if she may never appear after this issue. Along with Alice’s prominence, the theme of secrecy without shame was a very welcome plot element, as Alice is no stranger to her magic, but she has a purpose with using it so stealthily. Many of the shining moments of this issue relate to our secondary protagonist because of the cultural messages found within her but also her unique qualities that mark interesting and compelling characters.

Annie Wu is the artistic newcomer while Muntsa Vicente makes a welcome return to colors in Scarlet Witch #7. Wu’s thick, angular lines capture the structure and architecture of Hong Kong and give the characters a unique presence. Wu’s artwork stands out because the characters look like they’re from Hong Kong, and are all unique to each other rather than being facsimiles or done in a generic style requiring cultural suspension of disbelief. Vicente mutes many of the colors and the minor characters in the story, except for the brighter colors on Wanda and Alice, leading readers to pay much more attention to them. Much of the scenery of this issue reflects a dimly lit urban landscape, which helps to bring emphasis to important visual details throughout.

The prologue pages are wonderfully done. Visually, these images tell a story that marks the span of the Dark Tongji’s power, from a China centuries ago to a world with sprawling towers and modern clothes. The cultural influence on these pages bleed into the background of the main story, adding a new level of depth to the history that surrounds Alice, her family, and her dark adversary.

Thematically, magic is ‘hidden’ in this issue, initially shown in the small details of Alice’s gun and later through vivid pink streaks as she and Wanda fight the Dark Tongji. I like this effect because it mirrors the state of magic in-universe as a cryptic but ever-present force, but also Alice’s own relationship with magic. The occlusion of these mystic powers, and later the Dark Tongji’s hideaway, fit within a narrative of secrecy that runs through the story. Save for the aforementioned events, this issue almost looks like a police procedural with a random Romani woman in Hong Kong, but it’s also this contrast that heightens the story and its use of magic.

Scarlet Witch has been on a solid run since the first issue, and this installment adds a new dimension to Wanda’s story. As an independent piece of work, this issue is engaging and thoughtful. With slight cultural references and minimal flair, Scarlet Witch #7 is a story of family and magic with artistic emphasis in all the right places.