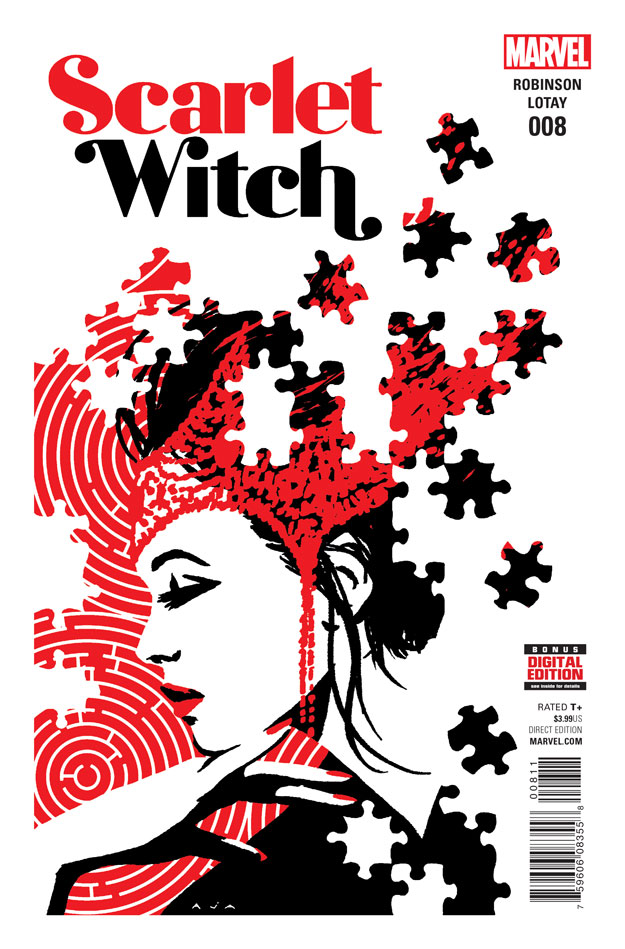 The crimson cowled magician takes a trip to therapy amidst her mystical globe-trotting adventure. Things are calm until she’s confronted with her relationships with her family, her history, and her ‘breakdown.’ Yet, she proves adept at working through the elaborate ruse, asserting herself against a history of mistakes and trials, enacting justice, and striking out on a new journey to uncover deeper parts of who she is.

Wow. If you want to talk about Wanda’s mishandling in the past, this is a seminal issue. The story brings up Wanda’s ‘breakdown’ in a raw and unfiltered manner. At first, I was aghast because her therapist was giving her ‘real talk’ under the guise of goading her to action. 1) Therapy real talk doesn’t look like that. 2) Wanda essentially had her past ‘mistakes’ thrown in her face. So, it was especially awesome to find that the psychiatrist was a villain, providing a sinister context to his truth-telling. Wanda’s past is mired in mistakes and stories that only see her as a powerful yet fractured force. What this issue does is turns those ideas around, giving her power not out of a sense of apology but in recognition of her own abilities. Dr. Grand is doing something any good therapist or psychiatrist wouldn’t and exerting his power over her to force her into a state of guilt and weakness, but Wanda knows that, while she would like to unearth the mysteries of her heritage, she does so out of love for herself and not to spite the years she spent at the mercy of poorly handled storylines.

James Robinson is smart. By the middle of the issue I was ready to hang it up and say that he reverted to the same broken narrative introduced in Avengers: Disassembled, but the revelation at the end of the issue definitely resolved that problem for me. In some ways, this issue does play to some of the problems with how Wanda has been written for the past twelve years, like her being at the mercy of someone else’s whims or powers. However, Robinson turns this idea on its head by showing Wanda as being more than capable of knowing when she’s being duped, of understanding magic. While Dr. Grand had some points, about the possibility of Wanda running from her problems, the way this situation is framed looks at the dynamics of vulnerability and pain, especially when it comes to therapy. Dr. Grand is a manipulator, and he uses the tortured chapters of Wanda’s past against her, but Robinson allows her a grand moment of agency by accosting her psychiatrist. This is definitely a complex issue, with much left to unpack, but I’m glad that it ended the way it did and didn’t assume that Wanda is simply a function of poor editorial choices of the past.

Tula Lotay shows some truly dazzling panels in Scarlet Witch #8, but that’s not where the magic is. Lotay’s ability to add softness to the story, considering much of it takes place in the context of therapy, makes the setting and the circumstances much more real. The muted earth tones and striking contrasts seen in previous issues helps here to ground the story in a psychological journey through Wanda’s history. There are also some really subtle and wonderful effects surrounding hypnotism throughout the issue, mirroring Wanda’s own growing awareness of what Dr. Grand is doing to her. Lotay’s skills were put to good use in capturing the feel and tone of Wanda’s story.

I like comics that engage me in multifaceted ways, and Scarlet Witch #8 does just that. While I was ready to give up the ghost, fearing that the series had lost its luster to the annals of a problematic continuity, I’m glad that this installment is deep, nuanced, and layered. Robinson’s skill as a writer shines, and Lotay’s wonderful art conveys the emotional undercurrent of this story and Wanda’s relationship with her past. This may be an issue that is divisive, but I think it’s important to digest. It represents the parts of Wanda that many of us detest, while providing a context around them that changes her current dynamic and how it relates to her prior actions.

Also: this is your continual reminder that psychiatrists are trained medical doctors and the probability of them doing therapy like this in this issue is very very low.