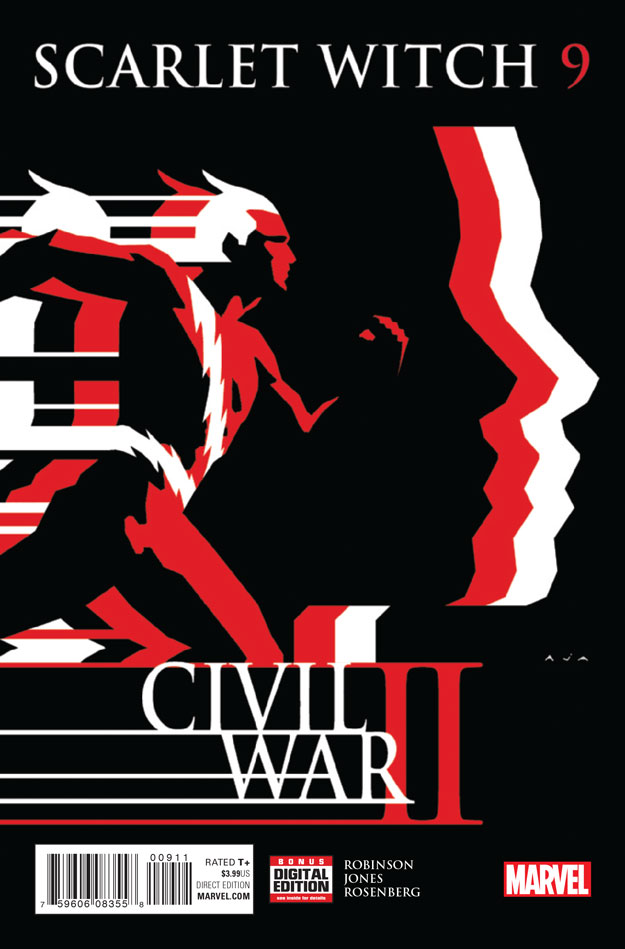 If you’re a Wanda fan, this issue is for you.

Pietro runs to Wanda’s doorstep to ascertain her side in the latest superhero conflict du jour. While he sides with Tony, fearing obvious consequences of using precognitives, Wanda instead addresses their true heritage and how it has always relied on such devices. Like the father they knew, Pietro tries to sway Wanda to his side by demeaning and nearly killing her, leaving her to forcibly eject him from her apartment and her life.

Wow. I wasn’t sure how Wanda was going to tie into Civil War II besides her presence in the event’s first issue, but Scarlet Witch #9 has what I feel is right about event tie ins. This story addresses her relationship with Pietro, and with her past, that manages to pull in years of editorial mistreatment without undoing the significant changes she’s seen since her reappearance. Wanda is affected, but she’s also worked to undo the damage from her actions and from the influence of her brother and “father.”

As with previous issues, James Robinson addresses issues from Wanda’s past in the context of someone trying to put her life back together. After the pressure from her brother and “father” she is someone who is seeking to create and exert her own influence over her life. The dialogue between these two characters revealed to me just how much Pietro and Erik influenced the darker parts of Wanda’s past and how they used her as a tool or as a follower, not seeing her as a daughter, a sister, or even a family member. Robinson writes Wanda as a force of nature, who is sometimes unsure but who is also truly coming into her own.

The revolving art teams have been a major draw for me in Scarlet Witch, so I appreciated what Jöelle Jones and Rachelle Rosenberg brought to the table in the ninth issue. Jones’ knack for capturing everyday people and movement is evident from Wanda’s first appearance. Her yoga poses are expertly portrayed, and Jones’ style benefits the both supernatural yet mundane conversation between two siblings. My only issue was Wanda’s presence, which seemed to be more sensual than the series has lent to so far. While I admire Jones’ portrayal of bodies and shapes, in some ways it felt like it didn’t fit here, despite nearly impeccable execution elsewhere.

Rosenberg’s dusky pallet enhances the reality of the conversation between Wanda and Pietro, the soft, warm glow making them seem as though they’re embroiled in the same kinds of situations known to many siblings. I love that the colors continually change through the issue, matching the long talks that we have with important others that seem to make intense hours feel like mere moments. The shift from the brighter and warm hues reminiscent of sunset to the deep purples mimic the flow of Wanda’s argument with Pietro and how the end reflects a distinct change in their relationship.

I have a lot of things to say about this issue and just how magnificent it is. I love Wanda’s gumption and her challenge to her brother that she is not to be unduly influenced, pressured, or changed to fit his whims. I truly feel as though this issue is one more stitch in a bandage to help remedy years of keeping Wanda broken or unstable or missing. Definitely pick it up if you want to see your Scarlet Witch defy odds and family to grasp her own destiny.